I'm sending this batch of photos covering a build of one of the later Myrt prototypes from the Hasegawa kit in 1/48. I always wanted to build this particular aircraft, of which three rather enigmatic photos exist. Mark Smith 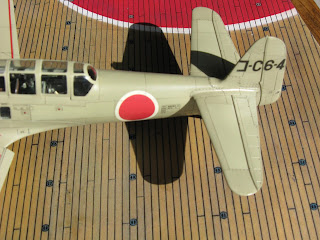 Proof at last that the "Saiun" did its carrier qualification trials...with a little help from Mike Kern ("The Base Guy") who provided the nice deck. These tail markings were offered as part of the first Hasegawa Myrt boxing, although one has to slightly deviate from kit instructions when building this later prototype. Mike Grant made me some much thinner ones based on the Hasegawa codes. 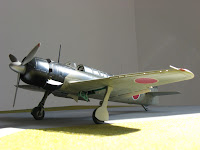 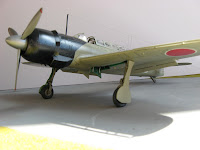 More than one Hellcat lost a tail-chase to the "Saiun", though the price pf survival was laborious; new spark plugs every 12 to 15 hours of operations. Conditions had to be right, but that a three-seat aircraft could sometimes pull this off against a cutting-edge single-seat fighter powered by a much more efficient P&W R-2800 testifies to remarkable aeronautical engineering. "Saiun" looked the part even on the ground. 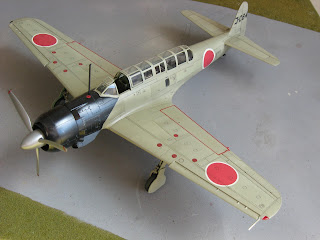 This airframe, in these markings, is illustrated in a side-view painting in the most recent FAOW on "Saiun" as having orange upper wings and tail; if so, it would be interesting to know whether this was an in-progress paint job, or at least know if any explanation is given in the caption. (Help?) I noticed the same contrast but different prints of this same negative in three sources allowed for wide interpretation. In the end I went with the overall color, but one thing is certain from the three photos that survive - it was smooooth and superbly finished. 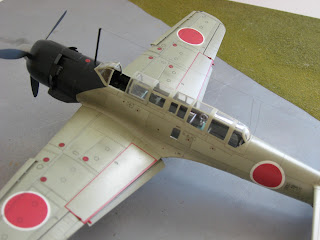 Hasegawa's penchant for providing separate Fowler flaps (and leading edge slats in this case) is not always consistent with the aircraft's typical appearance when grounded. In Myrt's case, this is especially so, as only three or four photographs of the many I pored through showed them deployed when parked; in one of those the engine is running, and another showed a derelict captured example. This didn't bother me too much when I considered what the task of closing them would have required. 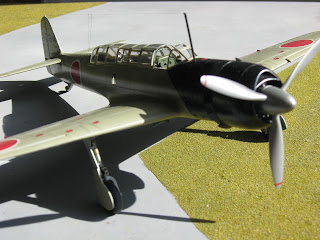 This photo makes an interesting comparison to the side view of the actual prototype (photo below) in terms of how the cross section of the fuselage (roughly oval) bisects the light - though the polarity is reversed. If the model photo was converted to black and white, the contrast would be so stark as to suggest two different colors altogether. 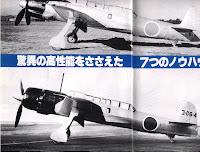 A few more photos of the model. 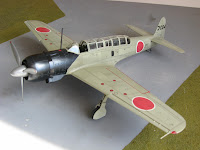 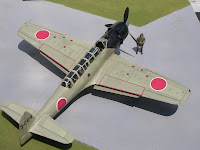 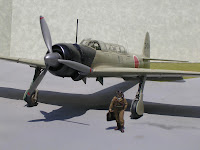 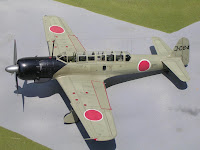 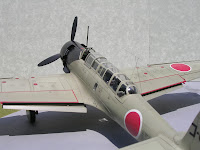 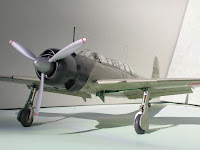 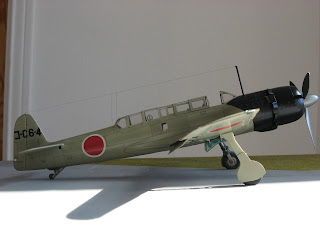 Hasegawa's molds of this kit strike me as some of the finest, for to replicate some of the most distinctive features of the "Saiun" was pushing the envelope for injection molding, and certain surface areas are extremely thin in order to accommodate cockpit and wheel well detail and portray the wing design and its flaps and slats. The effort to capture the correct airfoil sections for all flying surfaces, which were so critical to the aircraft's performance, is especially noteworthy. Some of these things are best appreciated by looking at Tamiya's older 1/50 "Saiun", which was a remarkable kit for it day, and seeing the advances made in injection molding in the past 45-50 years. 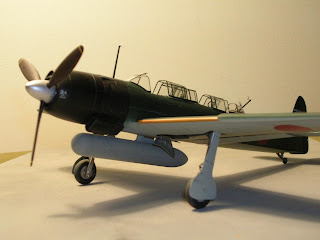 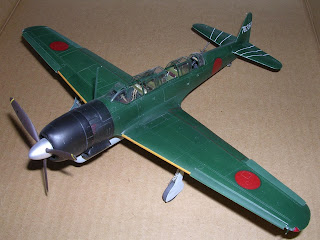 The green model above is Tamiya's old 1/50 kit. While it took a lot of work, the Hasegawa kit - which arrived 40 years later - looks so much better for comparatively much less effort.

Thank you very much Mark for the photos of your excellent models and the very interesting captions.
Posted by Arawasi

Hi Mark!
As far as I know this very test aircraft must have been painted aluminium/duraluminium..From the pics you have posted of your nice model I can see that you have used the IJN grey code..
Cheers,
Panagiotis.

Mark gives us 2 examples of his usual excellent work. Hard to believe that is the old Tamiya kit! The Hasegawa kit is really set off by the excellent finish and crystal clear canopy. Great modeling from 2 eras. Very impressive builds on both kits. Pat D

Thanks very much for the kind words, Pat.

Panagiotis, when I built this model, I went with the Maru Mechanic #15 interpretation as shown in its color side-view. This was also influenced by 2 things: first, several photos of Zeros with high-gloss finishes that had a similar lustre as the 3 photos of my protoype (and in that case I knew the Zeros were not natural metal), and second, photos of a different Myrt prototype (with the 4-blade prop and different cowl and scoop) that clearly *did* look like unpainted natural metal. While combinations of cameras and films can make for very different results, the difference between the appearances of the two prototypes and their finishes seemed notable. So Imade my best guess. Your guess may be better!

I thought your model from the same kit really pushed the envelope in combining research, imagination, craftsmanship, and sheer ambition. Sadly, the first two are often not found in the same room when it comes to modeling: for some, unless they know *everything* about the actual subject, it doesn't get built; and that's a shame, when for so many of us, it's the appeal to imagination that first drew us to modeling. Our imaginations were alive and well when we were building Airfix kits from the box (even if we couldn't make them look like the Roy Cross box art!)...next thing you know, we're needing the serial number of the airframe and the FS and Pantone paint equivalents before we'll start a project. But the spirit of your Myrt diorama as seen on this blog was great in combining research, extrapolation, and imagination.