Greetings from Texas,
Re your 22 January 2012 posting on the Mavis (here), the surrender aircraft you’ve posted has always been a source of interest. My 1/144 model of this airplane was based on the ramp photo, which first appeared via Bob Mikesh in the old profile on H6K and H8K aircraft. At the time I built it I did not have the other photo that showed the top surfaces. Your point is interesting when you wonder whether there are any green crosses at all on the upper wing hinomarus, or rather just a white outline. Hard to tell from the photo. I’ve thought about adding the white borders via decal strips, but thought I’d wait until I felt sufficiently ambitious. The day has yet to come!
The subject of surrender-marked aircraft and their role is a subject for which it’s very tough to find good information, and I would love to see it addressed as an evolving subject on your website.
I am attaching some photos of the model, built from the Trumpeter kit, along with an article on the build that appeared on the Roll Models website (here).
Mark Smith
Dallas, Texas 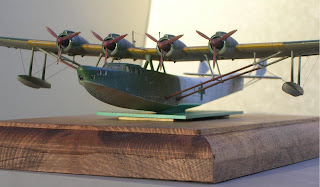 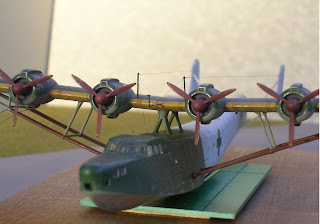 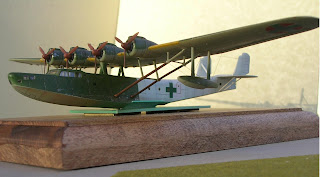 Thank you very much Mark for your contribution to our blog.﻿ Rest assured we will come back on the subject of captured Allied and surrendered Japanese aircraft very soon.
Posted by Arawasi

Not my scale ;-) Mark, but I REALLY like your build. Likely a unique combination of markings.
Well done.