Photo from a vintage magazine. Luzon February 1945.
At that time period the following Ginga units operated from Clark airfield of : 761Ku, 763ku and the Kogeki 401 and 405 Hikotai.
Personally I think it's a plane belonging to the 763ku but ofcourse I can't be sure without a visible tail marking. 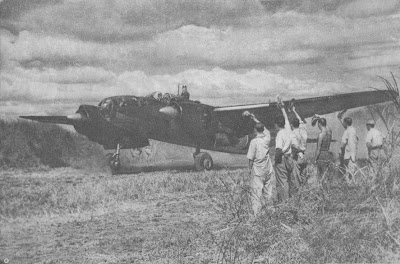 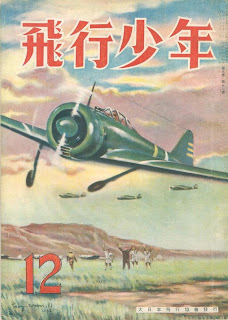 In this photo of a vintage magazine released in March 1942, a group of teenager maintenance crew members work on a "Babs" revealing excellent details of the engine. 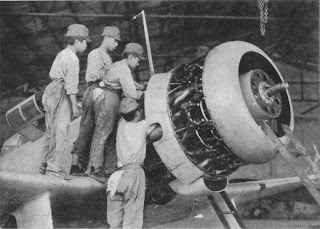 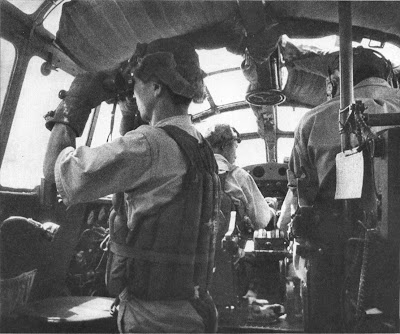 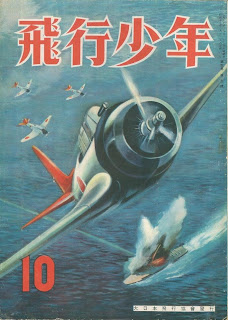 Nick Millman has a great blog. Occasionally he shares his thoughts and grievances and I like it because that’s what blogs are for. Without the sharp moderators’ scissors or the all dismissive “move away if you don’t agree” or the even worse “you are banned” that certain forums practice only to wonder in amazement a year later what happened to the guy they kicked away. Nick put up a nice piece on Friday and I hope he doesn’t mind if I share my thoughts here.
In my eyes there are three kinds of modelers.
First - There are those who see modeling as a pastime and simply a way to have fun. To them models are toys you assemble, occasionally paint and that’s all. Today a plane, tomorrow a tank…whatever.
Second - There are those who like to take it up a notch. They focus on one subject, airplanes for example, and build whatever they fancy as long as it’s interesting. Most of the time their models are out-of-the-box with special attention to the paint job. The more interesting or unusual the better. Not really interested to learn more about their subject and they love quick answers and solutions. Historical accuracy is desirable but not absolutely necessary. Very often they have a certain theme they really like and occasionally move away from it for variety.
Third - And finally there are those who scratch-built to exhaustion and really like to investigate their modeling subject. These are the guys who like airplanes and aviation history, not just modeling.
There are of course many other factors to take into consideration such as personality, mood, age, nationality and more. One important thing that should not be forgotten is the anonymity of forums where most often nothing is known about the poster beyond the certain modeling question.

I love to research the history of Japanese aviation and build models whenever I have the time. Many years ago I used to closely follow discussions on forums and contribute as much as possible. This led me nowhere. At some point I felt I was wasting my time searching for answers to questions from people who didn’t really care. Most of them modelers of the first and second kind. I don’t have anything against any kind of modeler. Everybody’s doing their thing and want to enjoy themselves. I don’t think it’s complicated. Getting in touch and communicating with other people is complicated.
Let me be more clear. There are Japanese plane researchers who frequent forums and try to answer whatever question about Japanese planes. Sometimes, but certainly not always, it’s a matter of making a name, becoming popular and finding satisfaction in the thank-yous. Good for them. There are other researchers like Nick Millman who are serious and really care about what they do. I would like to quote Mathew 7:6 as a message to Nick:
“Give not that which is holy unto the dogs, neither cast
ye your pearls before swine, lest they trample them
under their feet, and turn again and rend you.”

Explaining Japanese colours to a modeler of the first kind is totally futile, me thinks. And answers like “paint your model any way you like” or “follow the instructions” are perfectly fine.
Modelers of the second kind are more interesting but can be equally frustrating to a researcher. A very common question is “I got this Japanese kit and I’m looking for an interesting and unusual paint scheme. Can you help?”. It’s obvious that this guy is only partially interested in Japanese planes so any attempt to “teach” him something is just a waste of your and his time. Just pass him some interesting artwork, give him the latest “commonly accepted” colour number and paint and he is perfectly happy. Isn’t this the purpose of the posting and the discussion? The modeler to be happy?
Things can get complicated when he asks “is this historically accurate?” and the answer could simply be “who cares as long you have fun with the model and you are satisfied”. I believe that it’s up to the researcher to move away from the discussion and do other things that are more interesting than spend hours or even days doing research and trying to explain things to someone who is not really interested in all this in the first place. My advice to the modeler is simple, Google the plane to see what paint schemes are out there, before you buy the X model.
I must admit though that there is the occasional modeler of the second kind who is really good and shows potential to become a Japanese plane fan. The modelers I really like to talk to are those of the third kind. Because they care and I feel they share the same passion I have.
If Japanese plane researchers were following the wishes of modelers and what they are interested in then the subjects would be extremely limited as they had been until recently. Zero-sen, Kate, Val, , Midway and the occasional Kamikaze. I believe the more researchers move away from modelers, of course not completely abandoning them, the more free they become to present their work and the history of Japanese aviation. And in the end the modelrs too understand this and appreciate it.
George Eleftheriou
Posted by Arawasi 2 comments:

A photo from a vintage publication dated October 8th, 1943 of a Nakajima Ki-43-II Ko.
Another photo taken a few seconds before this one is featured in Model Art #395, p. 79.
According to the caption the plane belonged to the 1st Chutai of the 25th Sentai and the boarding pilot is 1st Lt. Okumura Masao*. On August 23, 1943 the 25th took off from their base in Hankou (Hubei province), made a stop in Yichang (Hubei province) and then proceeded attacking the then capital of Nationalist China, Chongqing. The photo is retouched by the war-time censored and the air intake at the top of cowling as well as the machine gun muzzle ports are missing. Nevertheless this angle still provides interesting information regarding the colour of the wheel wells (not aotake), the camouflage pattern and the brilliant tent that gives plenty of diorama ideas. 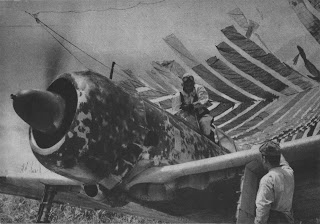 *As everywhere in this blog Japanese names appear in the traditional Japanese way with the family name first.
Posted by Arawasi 1 comment:

A6M5 Model 52, photo from a December 1944 vintage magazine. Note the barely visible multiple exhausts and the single 20mm cannon on the wing. The green paint line that curves and reaches the elevators, instead of the tail light, on the planes behind the ground crew guy,  indicates that they are Nakajima built Zeros.
Location and unit unknown but the white overalls of the ground crew means it's somewhere in Japan mainland. Note that the empty drop tank is very light, most probably it's a 150litre (other sources state it's a 200litre) installed under the wings. This particular type could carry a bomb under it's fuselage therefore the underwing drop tanks which were the same used by IJAAF and IJNAF.
Of interest is also the fuselage Hinomaru with the white surround overpainted. 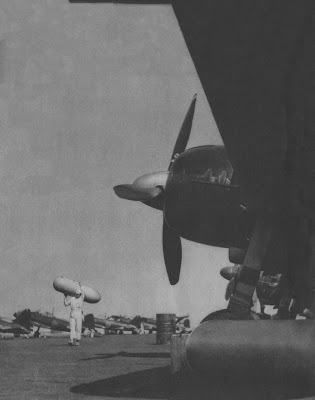 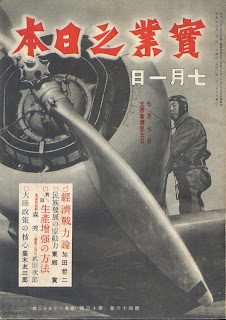