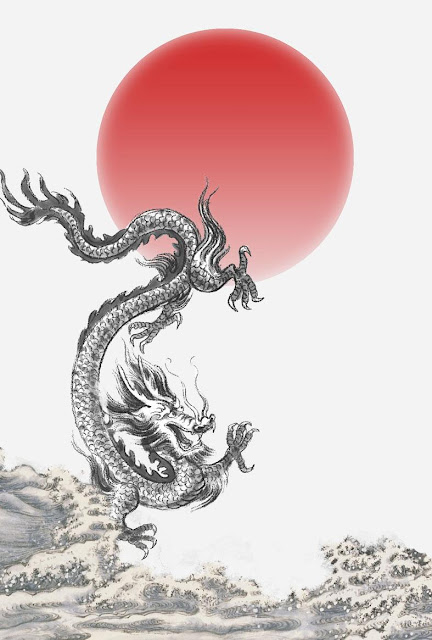 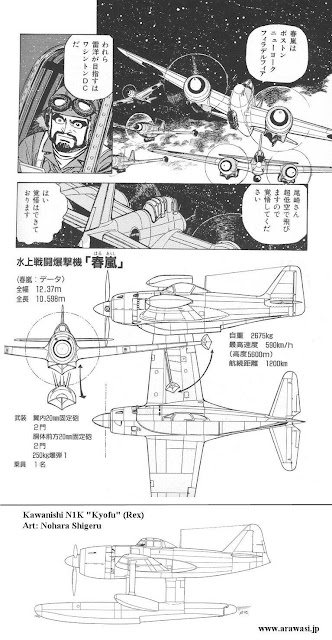 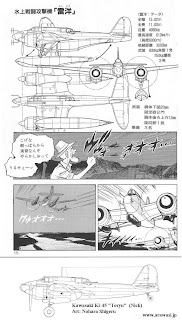 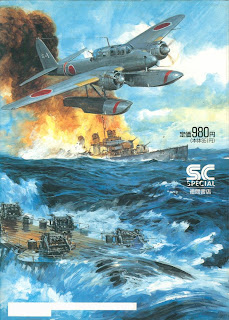 An interesting retractable (!!!) flotplane version of the Toryu equipped with radar and able to act as torpedo bomber. Can't figure out where the third crew member would fit.
What kits would you use to make this conversion?
Posted by Arawasi No comments: 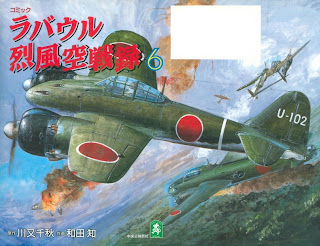 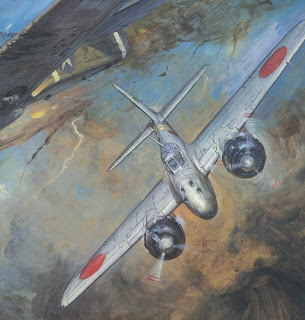 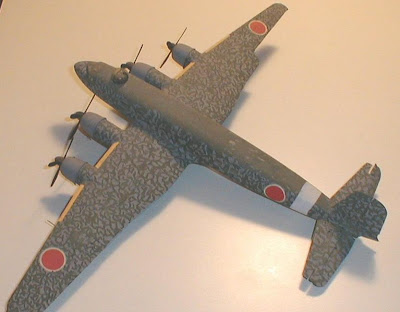 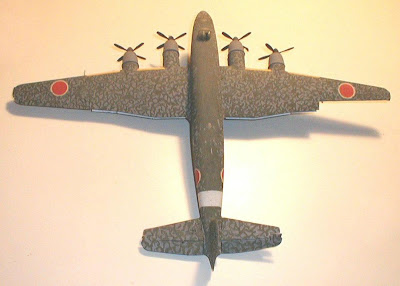 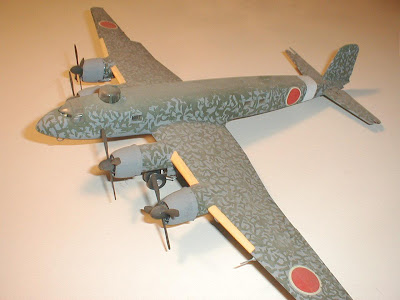 Thank you all for your support.
More designs from the manga series to follow from next week.
Please note that, as mentioned in the first posting, the artist is Imura Shinji.
Posted by Arawasi No comments: 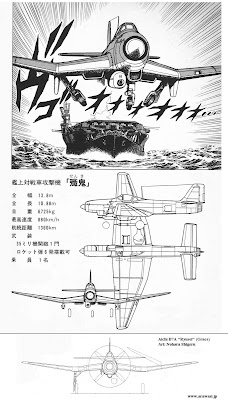 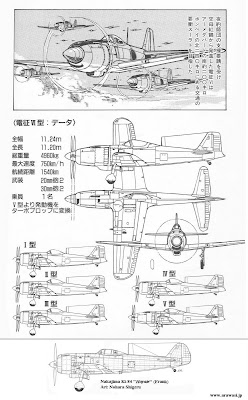 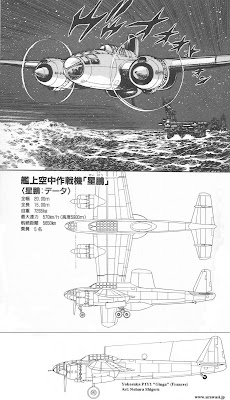 This is the first in a series of postings about Japanese X-planes, what-if and fantasy projects.
We would love to hear your feedback and ideas as well as feature your models and artwork.
First up is the manga/VHS/DVD series "Konpeki no Kantai" (Deep Blue Fleet).
Story by: Aramaki Yoshio
Art by: Imura Shinji
Published by: Tokuma Shoten (1992-1996) 20 Vols.
From Wikipedia:
"In Konpeki no Kantai's first episode, Admiral Isoroku Yamamoto's death on April 18, 1943, still proceeds exactly as in the real event. Just before his damaged plane crashes into Bougainville Island, Yamamoto blacks out, before awakening in a ship quarters. Unclear about what has just happened, Yamamoto speaks with a crewman, and discovers that he is aboard the Japanese cruiser Nisshin. He is then informed that the date is May 28, 1905 and that Battle of Tsushima has just ended. Yamamoto realizes that he has somehow been transported back in time (or to a parallel world).
After Yamamoto decides to revert to his old name of Isoroku Takano, he vows to use his advance-knowledge of the next 38 years to ensure that Japan does not make the same mistakes as before.
Yamamoto's first priority is to spearhead a massive naval construction program. It involves building a large fleet of advanced battleships and supercarriers, nuclear submarines based on the design of the real-life I-400 Sen Toku submarine, and advanced combat aircraft that were in prototype or concept form during the late stages of the actual Pacific War.
His plan for success begins with a coup d'état against the hardline government of Army General Hideki Tōjō in late 1941, on the eve of the Pearl Harbor attack, and installing an ally, Lt Gen Yasaburo Otaka as prime minister. Otaka, who has also been transported back in time, agrees to work with Yamamoto to change history and ensure that the Japanese Empire emerges victorious against the United States in the Second World War."
Tomorrow we will post more scans and details about the various airplane types presented in the series.
Stay tuned!
Posted by Arawasi 7 comments: 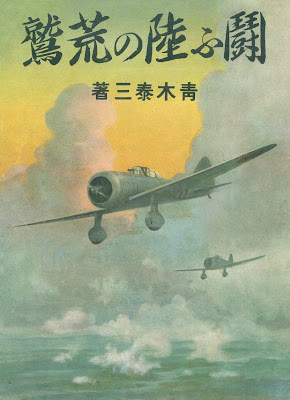 The old model with the Hiro Type 91 12-cylinder liquid-cooled engine and the four-blade wooden prop. Photo from a vintage magazine.

A dramatic shot showing the perils of lowering the floatplane from a warship. Note the guy at the far edge of the starboard wing tip releasing the attachment cable. I know I wouldn't like to be in his shoes.
Anyone interested to build a diorama out of this shot? 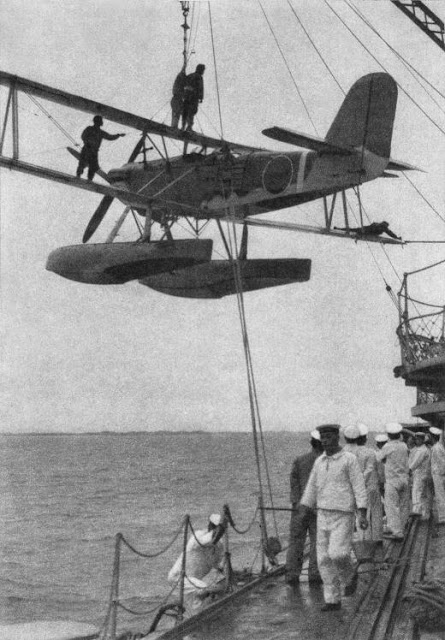 January 1945, Clark airfield, .
A Kawasaki Ki-48-IIa "99 shokei", belonging to the 208th Sentai has just been captured by advancing US forces and is put aside for evaluation.

The unit was decimated during the battle for , was reduced to transport duties during the Philippine campaign and operated only a small number of Lilys. Considering this, the color of the simplified white tail marking didn't indicate any particular chutai. 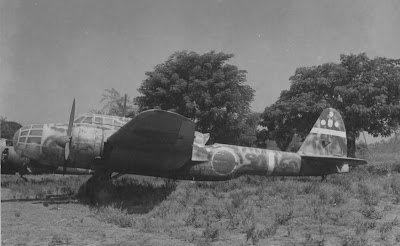 There are very few photos of this autogyro inspired by the Kellet KD-1A and built by Kayaba.
This one is the Kayaba Ka-go 2 with a Jakobs L-4 M A-7 air-cooled, seven-cylinder engine.
The story goes like this: the IJAAF imported a Kellet KD-1A from the States for evaluation. Unfortunately it was damaged during trials and the Army gave it to Kayaba to repair it. Kayaba installed a Jacobs engine and produced one more experimental test machine designated Ka-2. It was found to be very satisfactory and the Army decided to put it into mass production as the Ka-1 but with a different engine; an Argus As 10c eight-cylinder.
It served as artillery spotter and, according to a Japanese reference, with the 107Sentai.
It also served in the anti-submarine role equipped with depth charges from the Army aircraft carrier (yes, the Army had some of those too) Akitsu Maru. The first in the world to do so.
A rare photo I'm sure X-plane lovers will like.
Those who have the Francillon volume will notice some differences with the text above.

By the way...it's overall orange.