As you  have probably already noticed we avoid to make any negative criticism on the models featured on this blog, mostly because they are all really beautiful and wouldn't like to spoil the visual pleasure by nitpicking on small inaccuracies. Nevertheless our friend Cameron Lohmann was very open and positively receptive and therefore the purpose of the following comments is definitely not to put down his "Hayate" modelling effort but to help build better and more accurate models in the future. Feel free to leave a comment with your observations, questions or disagreements.
1. According to Akimoto-sensei IJAAF units that were officially entrusted with the air defence of Japan sported hinomaru with white bands on the wings and fuselage sides. Aircraft belonging to air defence units like the 4th, 5th, 53rd, 70th, 244th Sentai, the Dokuritsu 17th Chutai and others carried hinomaru with white bands. It should be noted that only units that were designated as "air defence units" carried the white band, not units that occasionally contributed to the air defence. An example is the 5th Sentai which in the summer of 1943 relocated to South-East Asia and its aircraft stopped carrying the white band.
Below are some examples that show how the bands, actually "bandages", covered completely the areas and didn't form "squares". All photos are from Koku Fan Illustrated #42.

Type 97 Fighter or Nakajima Ki-27 beloning to the Tachiarai Rikugun Hiko Gakko which had a small air defence group. 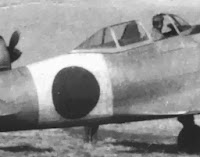 And finally a Type 4 Fighter or Nakajima Ki-84 "Hayate" belonging to the 47th Sentai also. Note how it seems to have a previously applied white ring around the fiselage hinomaru.
2. I would recommend to have the drop tanks painted the same colour as the lower surfaces (gray). Although yellow is a colour that has not yet been refuted beyond any doubt please visit THIS thread on Hyperscale regarding IJAAFdrop tanks.
3. I would finally recommend some stains and dirt behind the exhausts since it's an aircraft that has seen action.
HTH.
Posted by Arawasi

This is the type of valuable information that I'm always happy to learn.

I do have some exhaust marking behind the pipes but I really need more. I can add that right now. :)

I do have a question on drop tanks though. Did they always come fresh from their crates? Were they sometimes used again? Was a drop tank ALWAYS dropped when empty for the sake of better flying or did they sometimes come back with the plane?

Excellent Fluffy. Glad you like the posting.
AFAIK the drop tanks came fresh in crates and they were not always dropped; they were too valuable to waste. The pilots dropped them when they encountered enemy planes and wanted to get rid of the extra weight and drag. If they didn't encounter enemy planes, they returned with them and they were re-used. They were definitely not spot on and in pristine condition. They had stains and dirt all over the place. Imagine ground crew members carrying them with their oily hands,placing them on the ground...
Check for example these two links:
http://arawasi-wildeagles.blogspot.jp/2012/02/nakajima-ki-43-hayabusa-oscar-drop-tank.html
&
http://arawasi-wildeagles.blogspot.jp/2011/11/mitsubishi-a6m-zero-sen-and-fuel-tanks.html

Oh thank you.
During the last weeks I worked on 4 Oscars Ki-43. Two of them belonged to units defending the homeland. Both a/c I did extensive weathering on all surfaces. The a/c I built here I avoided the use of decals. That means all spraying and painting. The white areas are white, but not perfect at all. Shining of the basic paint on some spots still there. The hinumro is red, but even not perfect. The position of the hinumaro is almost symetric, but not perfect. All got the touch of realism. The drop tanks, oh yea. Instruction on decal sheets andso on vary. I even read yellow. What I did was half of the tanks are underside colour, half of them silver, or alu. On one a/c I mixed them, since some Ki-43 have alu underside and some grey.
In dogfight, a fighter pilot mostly dropped the eggs ( as they are called in jargon) befor engagement. The drop tank reduces the roll rateof an a/c dramatcly and with the drop tanks you are a sitting duck. Dead.
Therefore after air battle a/c return empty. If not, it my be a technical failure of the ejection mechanism.
Therefore I understand modeller who do not have this knowledge at all. The literature specially on japanese a/c is so much wrong, decals and many other things. I am involved in this and I have a good background from real a/c and combat from interview from the RAF and Luftwaffe and Israel.
Anyway I love this blog. Many greetings from Austria.
Bernhard