During our visits to model shows but also on HS and other modelling sites, we often encounter beautiful models of Japanese planes, unfortunately with small inaccuracies that spoil to some degree the visual pleasure and we ended up commenting: "If only this or that small thing was correct the model would be perfect."
Following the previous posting of last month (here) we would like to continue this series answering questions and offering advice to modellers to help them build more accurate models of Japanese airplanes. Please note that this series will not touch the issue of colour hues but will hopefully serve as a simple, basic modelling guide. The second "Model Commentary" posting is about the IFF stripes of IJAAF and IJNAF planes and will be in parts.
On October 5, 1942 the IJAAF and IJNAF issued joint instructions stating that all aircraft should have IFF (identification friend or foe) stripes painted on the inner leading edges of the aircraft wings. The length and thickness is not specified (as expected, since aircraft had wings of different length) but the instructions state that the length of the stripes should be about half the wing length. For camouflaged aircraft the stripes should be yellow (kiiro), for aircraft without camouflage the colour should be either red or yellow. The instructions finally mention that trainer and experimental aircraft should be painted yellow (kiiro) if there are no impediments.
The first IJAAF aircraft we will present is the Nakajima Ki-43 "Hayabusa" (Oscar).
All illustrations were created by our friend Devlin Chouinard.
First of all, not all "Oscars" had IFF stripes. Those built and operated before the above order was issued (Oct. 1942) did not have them. Most of them though probably had the stripes applied after the end of 1942. So, If you are building the Hasegawa "Hayabusa" in 1/48 with markings for the 1st or the 64th Sentai don't be surprised if the instructions don't have them.
The following photo detail from Model Art #395, shows exactly the length of the IFF stripe on the top surface of the "Hayabusa". 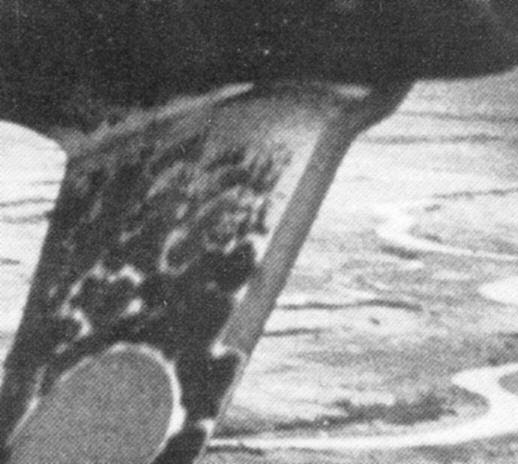 Common mistakes on models are the following:
1. Too short IFF stripe 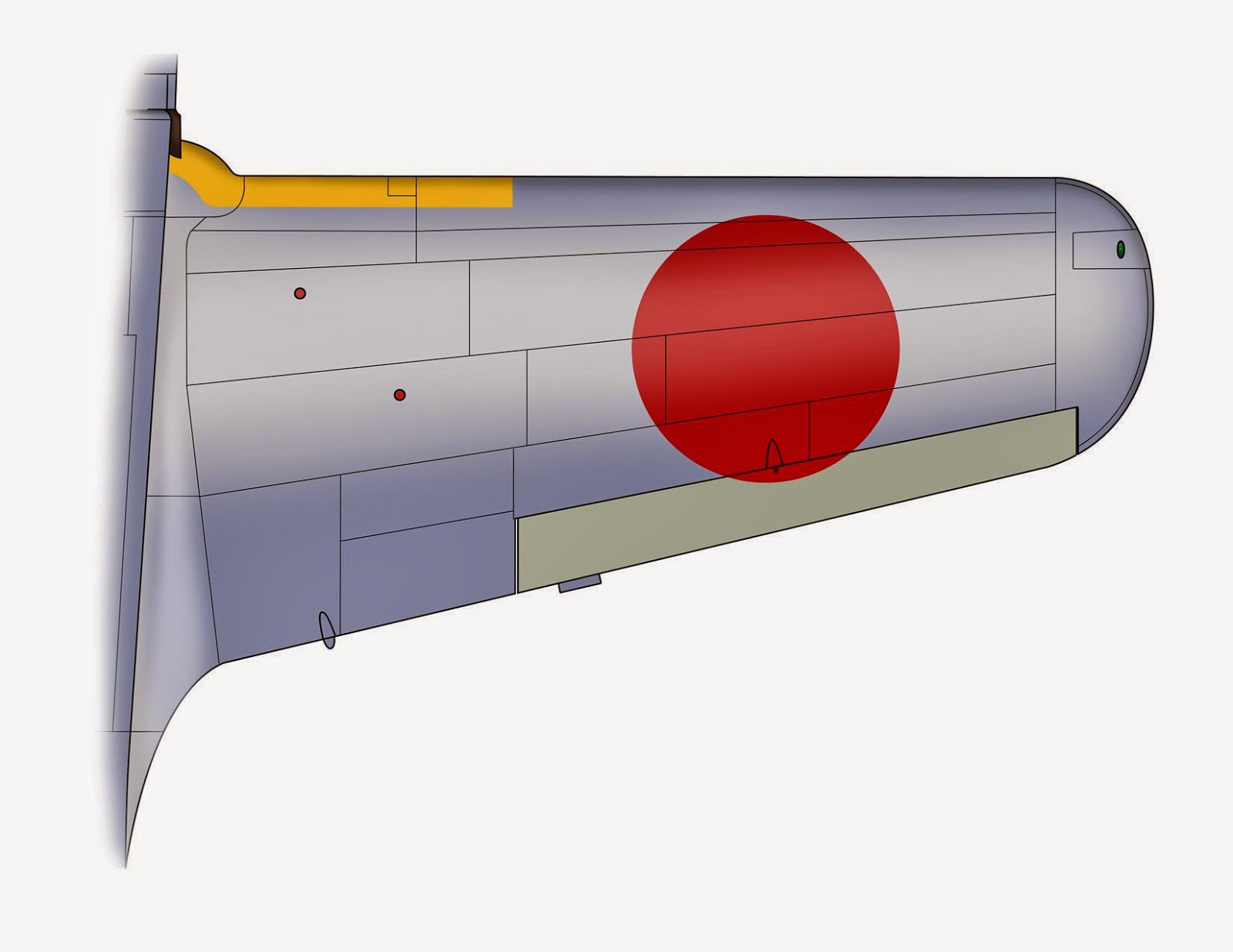 As mentioned above the exact dimensions are not specified in the orders. Although there were "Hayabusa" with longer and shorter IFF stripes than others, overdoing it and making either too long or too short is not accurate.
3. Too thick 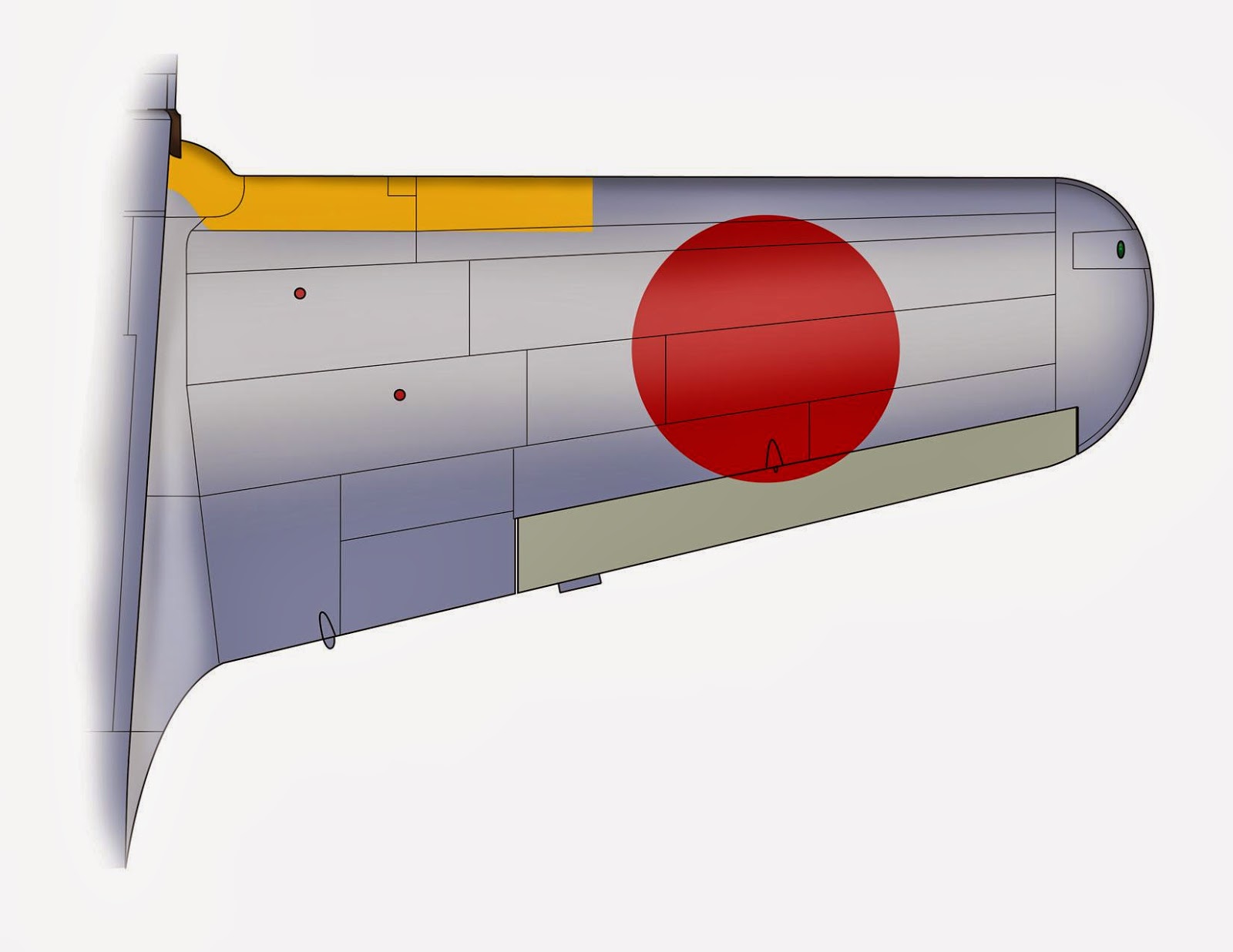 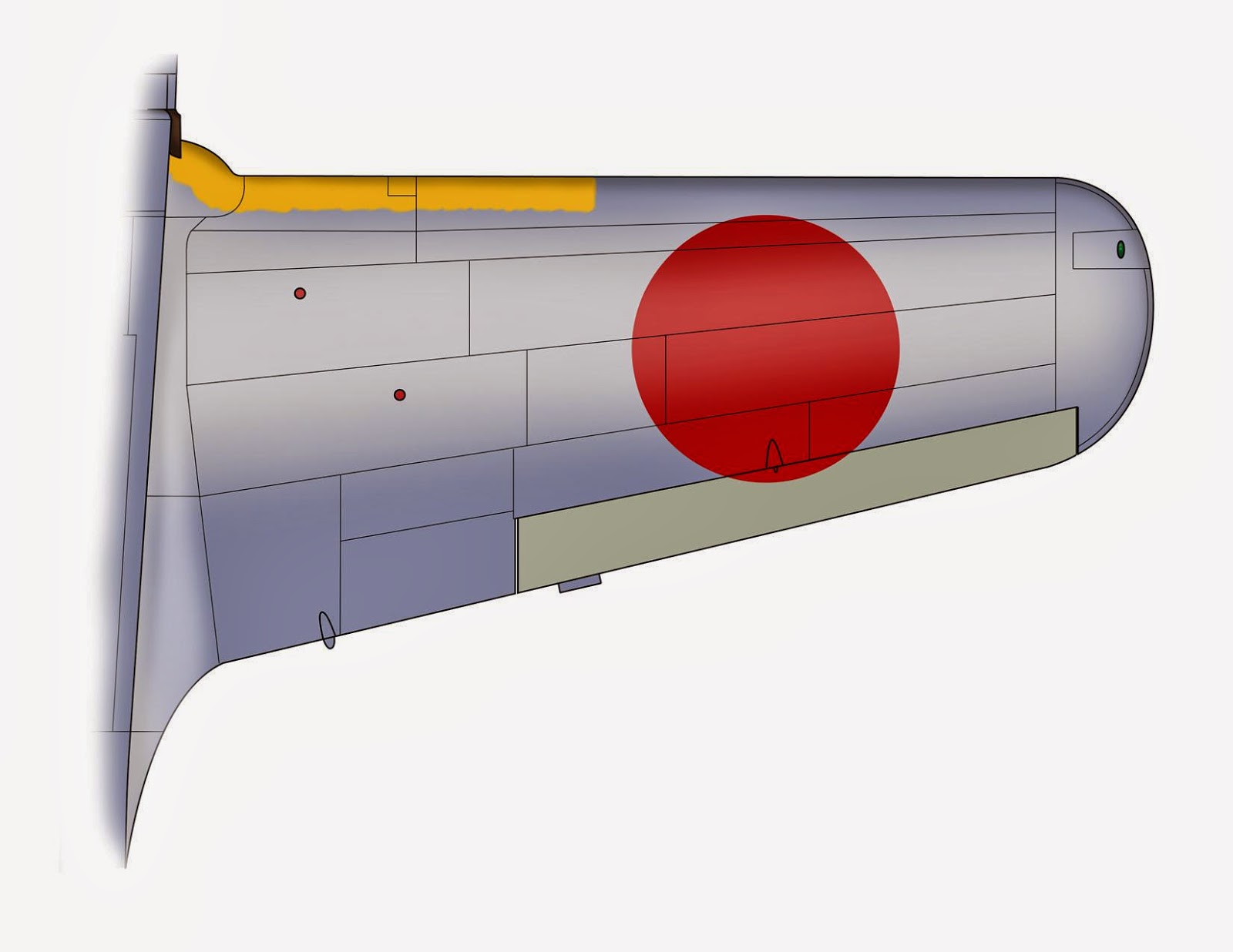 The details in the photos below from the "Kikuchi Collection" and from "Aireview" show that the IFF stripes on the "Hayabusa" follow the rivet pattern near the wing leading edge and were not too thick as sometimes portrayed by modellers. The stripes were never in perfect condition either, unless they were recently repainted by the ground crew. The "Hayabusa" did not have primer applied under the top camouflage and therefore the paint chipped quite easily. Maintaining and refuelling the aircraft as well as many flying hours naturally wore the paint.
A common problem modellers have in the 1/72 scale is to hand-paint the stripes and make them too rough on an aircraft with otherwise little weathering. It would be best to either build a "Hayabusa" in pristine, factory-fresh condition or if you are building one that has seen plenty of action, weather the plane and the IFF stripes accordingly. 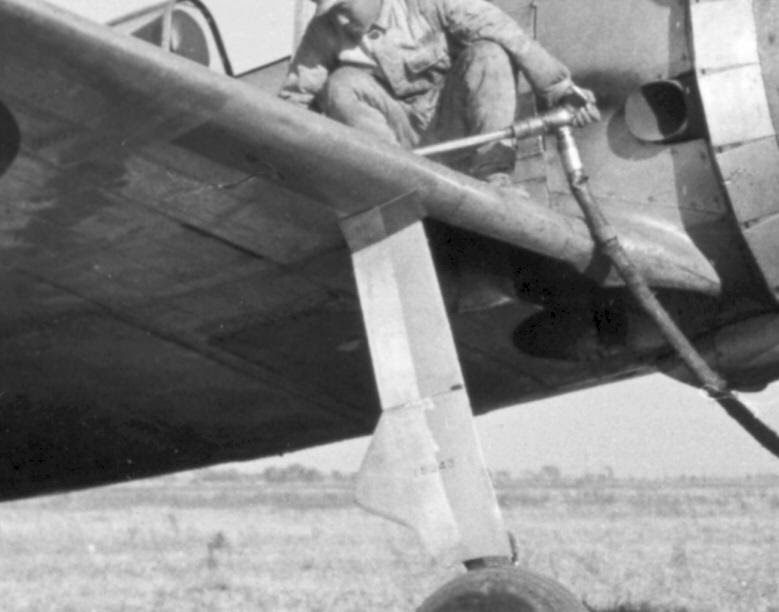 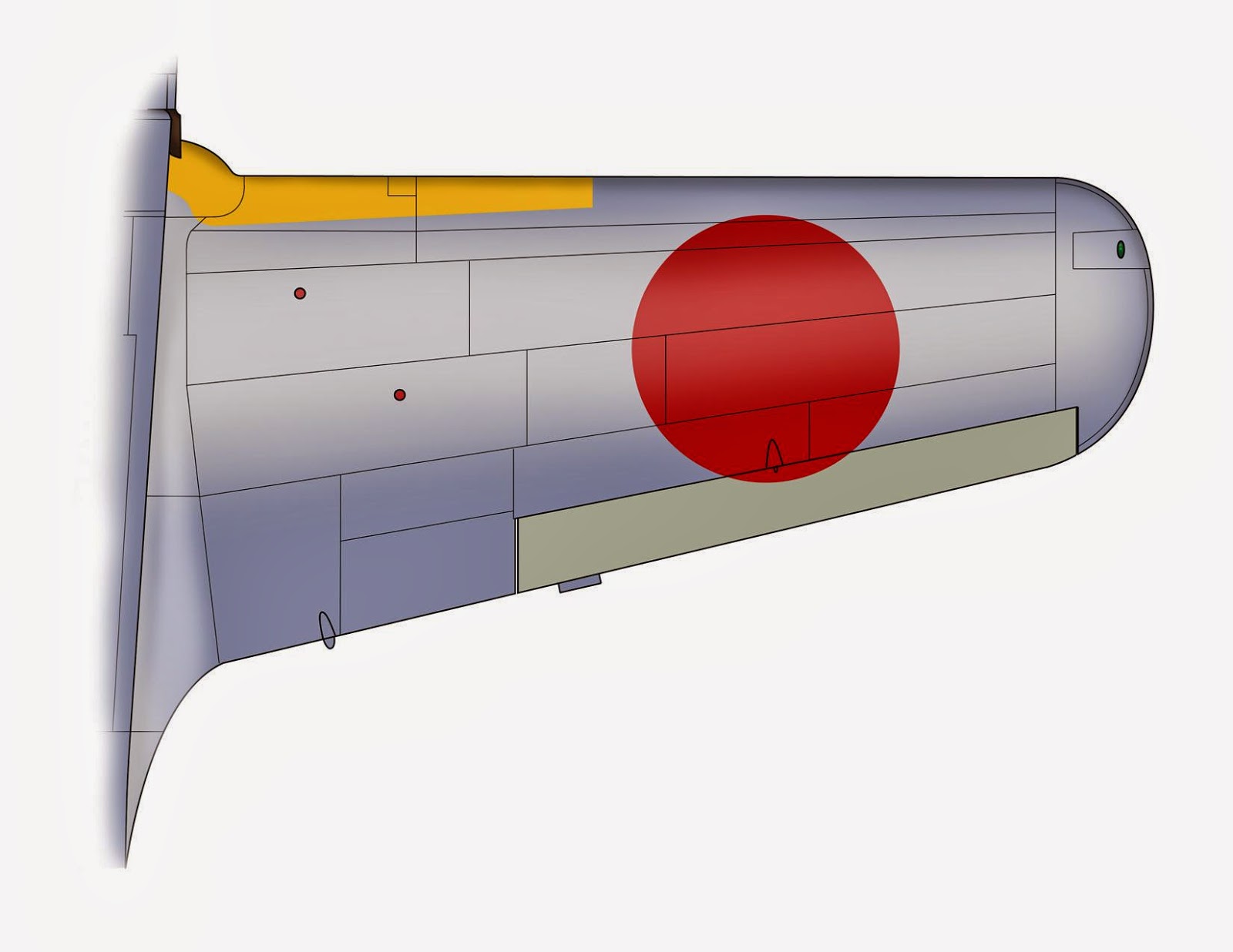 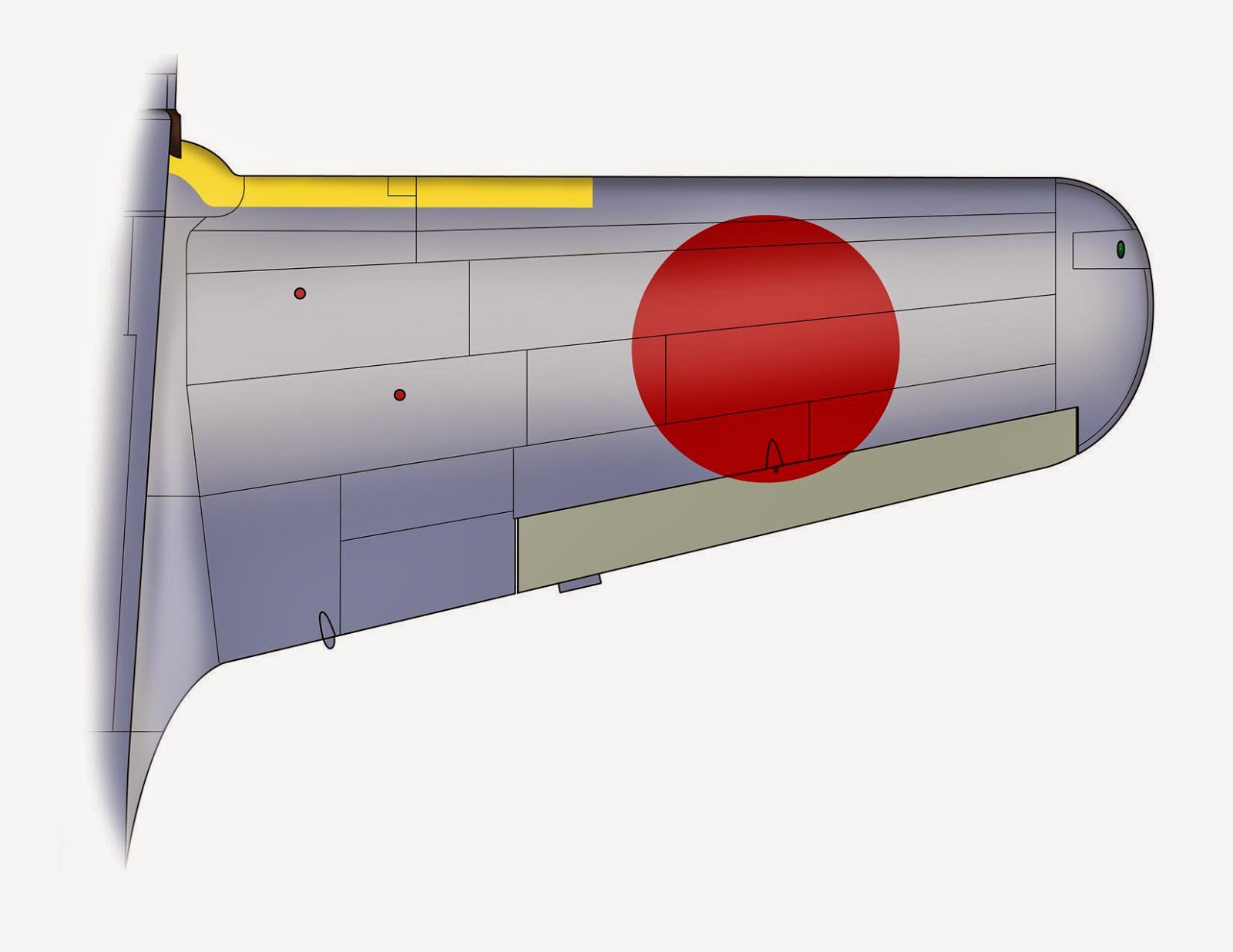 According the Akimoto Minoru-sensei (in Koku Fan Illustrated #42) the colour of the IFF stripes was more yellow than the orange-yellow of the trainer aircraft but still yellow-orange.
Very often modellers choose to paint the stripes very bright "lemon yellow". Although this colour is possible on older aircraft without a chance for proper maintenance or aircraft found after the end of the War, it is unlikely and an exception. Front line units used whatever kind of yellow paint they had available and often made their own mixes. But unless there is some evidence (colour photos, very detailed reports etc) to support the "lemon yellow" for your specific modelling subject, the "safest" option is to use a soft yellow-orange colour.
We hope you find the above useful. Every posting is an open invitation to questions, objections and requests for clarification. So feel free to leave a comment or send us an email.
Posted by Arawasi

Very interesting info! Thanks for sharing!


This is a most welcome idea George!
I think we might learn a lot of each other
because I've seen a lot of very professional jobs on
Japanese model aircraft.
I hope that a lot of the readers of this blog support the idea.

So this means a lot of model makers have messed up that detail.

Great George, that you share your knowledge.
I would like that some companies like Montex can be informed about this blog, since the instructions for the Ki-43 for their masking is definitly wrong. The IFF-stripes are too thick.
Happy Modelling
Bernhard

"So this means a lot of model makers have messed up that detail."
Well....
I think that very often they had to make do with photos of poor quality, the necessary Japanese sources (books) were not available to them and had only a passing interest on and understanding of Japanese planes. I do hope their next Japanese airplane kit would be a lot better and accurate.

That does make sense. I admit I didn't know myself until I read this post, but now I can't help but notice. ;)

This is great stuff. I already love the series :P