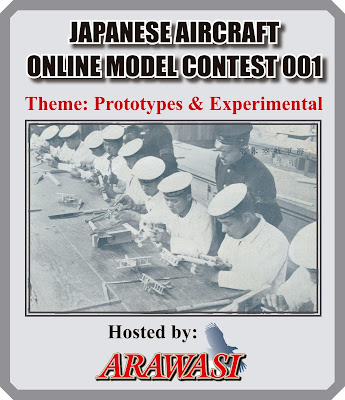 *Allow me to elaborate to avoid confusion.
1. Apart from the actual prototypes that were built and tested, the IJAAF and IJNAF had a number of projects and designs that never left the drawings board or were just considered. Models of all these are within the theme of this competition. In other words, whatever prototypes or experimental aircraft the Japanese considered, designed or built at that time. A "Fugaku" or a "Ginga" with an "Ohka" in its belly are in; a twin-boom Zero is not.
2. Markings & paintjob. Prototypes and experimental planes usually had very specific markings, those of the Kugisho of the IJNAF for example, or no markings at all. Therefore a KEN-3 in 244Sentai markings falls into the "what-if" category as the type was never assigned to that unit. There is more leeway for the markings of design-only X-planes or for those no photos exist. But again it is advisable to study the way other X-planes looked before starting to work on the paintjob or to apply markings. Or, preferably, start a posting here with the model you intend to build and ask questions. For example all the markings for the Mansyu Ki-98 supplied in the Meng kit fall in the "what-if" category. Extremely unlikely the IJAAF to have supplied the Thai airforce with the type!
The above does not mean that a model of a Japanese X-plane in "what-if" markings or paintjob will not be accepted in the competition but personally I would subtract at least 0.5 points in the voting.
Since we plan to organize more online modeling contests (the theme for the next one will be "what-ifs") we would really like to hear your suggestions, ideas etc.
Posted by Arawasi

This is a great idea.

Why not use your real name. It would be good to know who is making
the comments, or votes.

After seeing in person what can happen to some who give away there identity I choose to have a username. I have been Wind Swords (or windswords) since 1997 on many forums: aircraft, autos, political, music, film & TV, etc. So my postings and opinions can easily be found, and therefore are not hidden, but my true identity I prefer to keep private.

To each his own,
Wind Swords

I can respect that. However, I have never seen your username outside
of this site. What other aircraft sites have you posted on. I would
like to see your other comments. Thanks.

www.j-aircraft.org I have been posting here since 2005-6 but they clean out the old postings so instead of 100+ postings I have only 30 something).

http://lostinspaceforum.proboards.com/index.cgi several sub forums.
(If you go to the /Model Making/Jupiter 2 models subsection you can see my detail build up of the Polar Lights J2).

http://www.thetruthaboutcars.com/ (have not posted here in a long time)

http://kevinrandle.blogspot.com/ "A Different Perspective" - lively UFO debate between believers and skeptics. I have a lot more postings in 2015 then 2016.

So although I don't want to give away my identity I have no trouble giving away my opinions! :)

Great idea George and crew - for both the online model contest and the call for a bit of respect for others' personal preferences.

I'm looking forward to seeing the range of models that emerge from the workshops.