After participating in the Aleutian Operations, Seaplane Tender Kamikawa Maru, returned to Yokosuka in August 1942. While there, a seaplane fighter group was organized and the ship departed on August 23 with 11 Nakajima A6M2-N "Rufe" and two Mitsubishi F1M "Pete" seaplanes. After passing through Rabaul, they arrived in Shortland Islands in the Solomon Islands Archipelago, on September 4.
The Kamikawa Maru seaplanes together with those of Seaplane Tender Chitose (16 "Pete" or "Dave" and seven "Jake" or Kawanishi E7K "Alf") were based in the small Poporang Island, next to Shortland Island, while the seaplanes of Sanyo Maru (six "Pete" or "Dave" and two "Jake" or "Alf") and Sanuki Maru (eight "Pete") were based in Shortland Island. CO of the Kamikawa Maru "Rufe" group was Capt Ono Jiro and the small unit was under the command of the 11th Koku Sentai (Air Flotilla or Seaplane Tender Division). Below is a listing of most of the unit actions with emphasis on enemy encounters.
According to the book “World War II Sea War, Vol 6: The Allies Halt the Axis Advance” (hereafter Sea War) by Donald A Bertke, Gordon Smith and Don Kindell:
“The Japanese Eighth Fleet created the "R" Area Air Force under Rear Admiral Jojima Takatsugu. IJN seaplane carrier CHITOSE was assigned to the No. 1 Group of the 11th Seaplane Tender Division with seaplane tender KAMIKAWA MARU.
The seaplane tenders SANUKI MARU and SANYO MARU were in No. 2 Group of the 11th Seaplane Tender Division.
The seaplane unit was to augment the land-based IJN aircraft in the Guadalcanal area. The unit used E13A1 "Jake" monoplane aircraft for long-range reconnaissance and anti-submarine missions, Type 2 Nakajima A6M2-N "Rufe" single-seat float fighter, and F1M2 aircraft for light bombing, convoy-escort duty and to complement the A6M2-Ns in the fighter role.
The R-Area Air Force was based in Shortland Harbor, but Rekata Bay on Santa Isabel Island, 135 miles northwest of Lunga Point on Guadalcanal, served as the unit's forward staging base.
All aircraft of CHITOSE were landed and transferred to the R-Area Air Force at Shortland CHITOSE herself began repairs, probably by repair ship AKASHI at Truk, and then departed for Yokosuka, Japan.
KAMIKAWA MARU supported air strikes from Shortland Island.”

The Izawa entries are indicated with the letter I- in the beginning, the Kodochosho with the letter K-.
September 4
I- On the very same day they arrived in Shortland Islands, two "Rufe" seaplanes flown by WO Kawamura and PO2c Matsumoto took off on a patrol mission. Over Buin, on Bougainville Island at an altitude of 3,000 meters a B-17 was spotted and attacked with unknown results due to heavy clouds.
K- Between 10:00 and 17:10 four "Rufe" seaplanes took off on patrol around the base. Two of them located one enemy B-17 bomber which they attacked inflicting serious damage. One "Rufe" was shot but damage is reparable. On that day the base on Poporang Island is completed and patrol boat number 36 transported personnel to Rekata.
WO Kawamura and PO2c Matsumoto took off at 09:55. At 10:15, while flying at an altitude of 4000m, located enemy one B-17 at a distance of 3000m flying at 5000m over Buin. Both "Rufe" attacked one after the other from the front lower left of the bomber. One "Rufe" hid in the clouds while the other continued to attack twice from the lower back of the bomber and broke contact. The other "Rufe" hiding in the clouds continued to follow the bomber for some distance. Both fighters returned to base at 11:45. Ammunition used: 20mmX217, 7.7mmX400. Fuel used: 500li. Attack time: 10:15~10:50 at 5000m, results unknown. Damage: Matsumoto's "Rufe" received three bullet holes. Weather: half clear, clear view to a distance of 30km.
The very detailed Kodochosho entry is accompanied by a small map that shows the way the "Rufe" seaplanes attacked the B-17. The "Rufe course is indicated by the dash line, the B-17's with the straight. 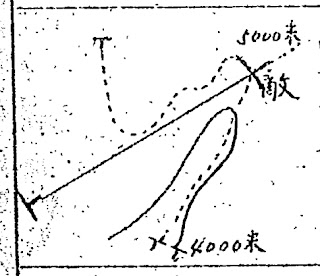 At 13:00 PO2c Oyama and PO1c Kuwajima took off on patrol, NEC (No Enemy Contact), returned to base at 15:10.
September 5
I- Five times patrol over the base and provided air cover flying over a patrol ship twice. On that day a new base was completed at Rekata Bay, on the northeast coast of Santa Isabel Island.
K- From 05:00 until 14:30 ten "Rufe" seaplanes took off on patrol without any incidents. At 08:00 and at 11:00 the air alarm was given and five "Rufe" on stand by took off but NEC. From 07:30 until 13:00 four "Rufe" and two "Pete" provided air cover for the Patrol Ship No. 36. The base on Rekata was completed. "Rufe" pilots: Kuwajima, Oyama, Kofuji, Watanabe, Kawai, Maruyama, Ono, Shimura, Kawamura, Matsumoto. "Pete" pilots: Nishiyama and Omura; observers: Aono, Fujimura.
September 6
I- Patrol same as the previous day.
K- From 07:00 until 14:15 six "Rufe" and three "Pete" seaplanes escorted Patrol Ship No.36 without any incidents. From 07:00 until 15:00 two "Rufe" are always on stand-by at the base.
September 7
I- Four "Rufe" seaplanes located over the base one B-17 at an altitude of 8,000 meters. They tried but failed to catch the enemy aircraft.
K- From 05:00 until 15:00 "Rufe" seaplanes made 18 exits on patrol. At 13:05 one B-17 bomber was located at an altitude of 8000m by four "Rufe" on patrol but the enemy escaped in a Western direction.
Two "Pete" seaplanes escorted ships of the 24 DesDiv without any incidents from 11:45 until 14:30.
One "Pete" dropped documents for the headquarters on Rekata Base.
September 13
One "Rufe" attacked a lone B-17 but could not inflict any damage due to gun failure. Two more "Rufe" seaplanes flew reconnaissance mission over Guadalcanal Island shooting down one Grumman F4F Wildcat.
In the book “Air War Pacific: Chronology: America’s Air War Against Japan in East Asia and the Pacific, 1941 – 1945” Eric Hammel has the following for September 14: “At 1730 hours, two low-flying A6M2-Ns based at Rekata Bay, Santa Isabel, down a USMC SBD returning from a search mission. The SBD's pilot and gunner are both killed.”
September 14
Five "Rufe" seaplanes located and attacked one B-17 over Rekata bay. During Kawai Jiro's attack the enemy aircraft started emitting white smoke but was not shot down.
The same day three "Rufe" flew reconnaissance over Guadalcanal but didn't return.
Two more "Rufe" flew to Guadalcanal and encountered two F4Fs. One "Rufe" and one Wildcat were shot down.
Hammel: “VF-5 F4F pilots down four A6M2-Ns over Guadalcanal at about 1000 hours”
September 16
Two "Rufe" located four B-17s over Buin Island at an altitude of 8,000m. They tried to attack but the enemy managed to escape with no damage. 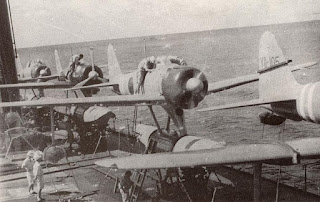 The tail markings of two seaplanes are visible and as usual our good friend Devlin Chouinard created artwork. As you can see the "Rufe" unit used the tail marking "YII-". 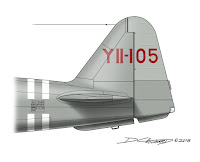 The best published version of the above photo can be found in the publication "Maru Extra #2", January 1997 and a lot of interesting details can be gleaned.
First up the tail markings.
The rudder of YII-105 is secured in place with that whatchamacallit and so we can see that the fabric surfaces are lighter in color than the metal; similar to the "Rufe" in the Aleutians. Note also that the marking is a combination of serif and sans-serif. The top of the "Y" letter is sans-serif, the bottom has serifs. The "II" have serifs. 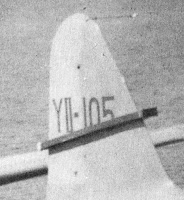 The tail marking of the "Rufe" behind "YII-105" is not visible in low quality photos, but in the "Maru" Extra #2" is clear it is "YII-101". While the "105" has the marking applied on a previously unpainted surface, in the "101" it seems there was a previously applied marking which was overpainted and the "YII-101" was painted over. Again notice the lighter color of the fabric rudder. Unfortunately the tail markings of the "Rufe" seaplanes behind them are not visible at all.

Right below the main float air scoop of the "YII-101" the number "1" in red (or black) can be gleaned. It was not a rare practice to repeat the last digit(s) of the tail marking on that place as we will see in future postings. 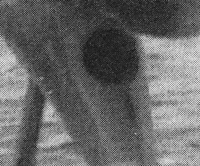 Another interesting and quite unusual detail is a peculiar thing attached over the main float's fuel tank filler cap and purging system. From all the "Rufe" photos, only these "YII" seaplanes have it. Any ideas as to what it could be are welcome.

And finally of interest is the dolly over which the "Rufe" seaplanes are secured. It looks highly complex and of a different design than the catapult dolly. 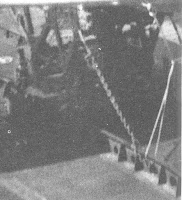 In the same "Maru Extra #2" there is one more very beautiful photo of the Kimikawa Maru "Rufe" seaplanes on their base in Poporang Island. Below are two close-ups I'm sure modellers will find inspirational.
In the photo below apart from the "Rufe" seaplane with the cowling removed, of interest are the tents in the background but also the Daihatsu landing craft.

Another photo of the Daihatsu barge I found here.

And some more information from here. (20 horses could fit in there??? Really? In what scale?) 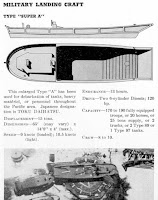 The second close-up features four "Rufe" seaplanes. The tail marking of the one on the right could either be "YII-106" or "YII-108" and the fuselage looks to be quite dirty. Notice also the thing on the main float between the main pylon and the V strut all four of them have. The three from the right have their rudders turned so they look as if they are darker or lighter but the one on the extreme left has a straight rudder which does not show any color difference.
All "YII" "Rufe" seaplanes have the twin white bands on the fuselage. This has been explained as indicating the flight leader but obviously this suggestion is not correct. Instead, the bands indicate the second ship of the 11th Seaplane Tender Division, i.e. Kamikawa Maru. The floatplanes of the other seaplane tender, Chitose, had tail marking "YI-" and one band on the fuselage.

As always, this post will be updated as new information comes in.
Posted by Arawasi

I have enjoyed your articles on Floatplane operations. The use of Japanese and Allied operation information is quite entertaining. I look forward to more installments.