In November 1944, the 53rd Hiko Sentai was ordered to form a shinten seikutai flight of Toryu for air-to-air ramming attacks. Aircraft # 98 was one of them, embellished with the conspicious karimata arrow. The Ki-45 KAI Tei was modified by removing armament, abandoning the rear cockpit and cutting back the antenna mast. It is doubtful, however, whether it was ever used for this purpose since the 53rd was relegated as a night fighter unit in January 1945.
The pictures highlight that the Toryu is one of the most appealing airplanes in Japanese military aviation - much too graceful for a suicide mission! My model is based on the Nichimo 1/48 kit, finished in 2010 with several refinements which are described in more detail (including a moment of panic) in my build report here:
http://www.aviationofjapan.com/2016/02/michael-thurows-148-ki-45-toryu.html
Wishing good luck to all contest participants!
- Michael Thurow, Germany - 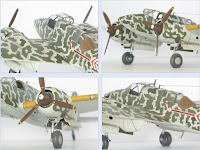 For years the Nichimo was the only Ki-45 available in quarter inch scale. Despite being nearly 40 years old, it is still a great model and your work clearly shows why. So I will give a 9 because it would have been easier to use the Hasegawa model.

I too will give it a 9 for much the same reason Jean mentioned. It looks to be very well done, and I like the context of the fuel truck and airfield personal.

Yes, for a an oldtimer like this Nichimo it is pretty well done.
9

Wow. Another 9 type of effort. I read the build report on this and Mr. Thurow went through a lot of research and used aftermarket accessories and parts from a Hasegawa kit in order to make this as good as possible. So a 9 from me. If I could rate it higher than 9 but below a perfect 10 I would.

I agree. It looks stunning! Love the antenna! 9

9 for all the reasons said above and because I really enjoy the beauty of your build!