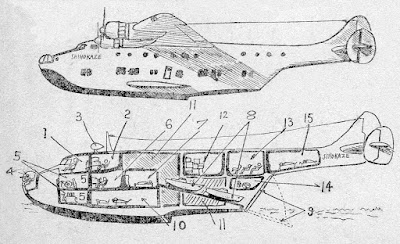 Or as zegyeye pointed out, even closer to the Boing 314

The rear ramp with the motor boats is particularly intriguing. I admit I've never heard of such a feature on a flying boat although I guess it could make sense in a way.
The only "flying boat" that could come close, is the experimental Stroukoff YC-134 with the unique system that could land the transport on water. Note the three-tail feature similar to the "Shiokaze" design. 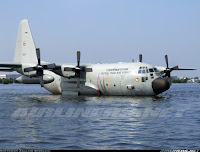 Jokes aside the ramp in the back could be useful in open sea rescue operations but not so practical if it's required to unload passengers or supplies on an island or a harbour, since it would be impossible the flying boat to back up towards a dock, a pier or a beach. I think this is the reasoning behind placing the large doors in the front of the experimental Kawanishi H11K-1 "Soku" super transport flying boat.

And let's not forget the Convair R3Y Tradewind. 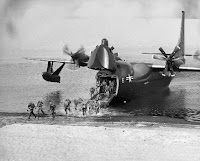 That's right zeg! You nailed it!

Please keep these "what if?" designs coming; this is an excellent series!

I never knew of the H11K-1. Is your photo of a mockup or a real airplane? If real, was it flown?

Thanks Harold.
Check the link if you like for the story and data of the plane.

Duh; the answer was right in front of me.
Thanks George.