A very rare photo today I spotted on the Japanese ebay. It features a Nieuport 81 registered J-BAAF and belonging to the "1st Aviation School" of Munesato Etsutaro, seen in the photo in pilot's uniform. 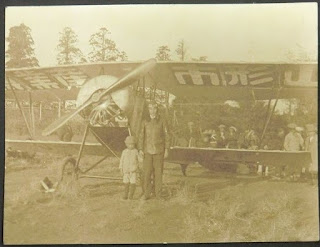 Munesato Etsutaro was born in 1886 in Yamaguchi Prefecture. He became interested in aviation from 1909, and two years later designed his own amphibian aircraft. From 1917 until 1921 he was chief engineer at Akabane Aeroplane Manufacturing Works and after this went under, he started his own flying school. On May 1923, opened the "1st Aviation School" at an airfield that bore his name, at Ushioda, Kanagawa Prefecture (present-day part of Tsurumi Ward).
A local newspaper reported:
“At Ushioda City, a licence was issued to teach new pilots how to fly. On April 28, 1923, at 10:45, pilot Okura Seizo flew for about nine minutes to an altitude of over 200 meters with an Avro 80hp, before landing. Then, with pilot Kamei he took turns to fly the aircraft either solo or together. At 11:56 these first flights of the school were concluded.”
The "1st Aviation School" had seven aircraft and usually about 15 trainees. In addition to the training, the general public could enjoy a tour over Yokohama for a fee of 15 yen. One of the more famous students of the school was 19-year-old Kibe Shigeno, the second female aviator in Japan.
The land for the school airfield was obtained for free on a 3-year lease, so in February 1926, the school relocated to Funabashi in Chiba prefecture. On May 2, 1934, Munesato passed away from illness, aged 48. At the time of his death, there were nine students, making a total of 50 students who graduated from his school.
His wife, Sono, took over and continued to be involved in aviation matters until the school was taken over by the military in 1939.
The photo was taken during the Yamagata City Industrial Exhibition on Sept 10, 1927. The inscription under the top wing reads “Yamagata-shi SangyoHaku” (Yamagata City Industrial Exhibition). The particular aircraft was built under licence by Mitsubishi, s/n 527, had a Le Rhône 9J engine, and was damaged beyond repair on March 16, 1929.
Posted by Arawasi

Thank you for this RARE find, and the translation.