The Kawanishi E5K1 is not a very well known Japanese type.
The story starts with an IJNAF order in 1927 to Aichi, Kawanishi and Nakajima for a 3-seat reconnaissance seaplane. Design engineer LCDR Saha Jiro started building Yokosho's (Yokosuka Koku Kosho - Yokosuka Naval Arsenal) own version based on an imported Heinkel 28.
It started as a modification of the Yokoso Type 14 Reconnaisance Seaplane but with welded steel-tube fuselage and redesigned wings. Yokosho completed their first prototype in August 1928 followed by one equipped with a Jupiter Model 8 engine and another with a Jupiter Model F9 engine.
While Yokosho were building their own prototypes on January 16, 1931 Kawanishi received a direct order by the Navy to build two pre-production aircraft which they did on October 25, 1931 in cooperation with Yokosho.
The E5K1 with Jupiter engines were called early type by Kawanishi and when they installed liquid cooled 500hp, 12cylinder Type 91 engines these were called later types. The later types were faster by four knots and even though they could climb to 3,000 meters in 25minutes, they could climb to that altitude faster than the early types by 13 minutes and 20 seconds.
In total Yokosho built three prototypes and Kawanishi two pre-production and 15 production planes.
On March 3, 1932 the ceremony for the first presentation aircraft for the Navy (Hokoku) took place at the Naruo factory of Kawanishi. The photo below from a vintage publication is from that ceremony. The E5K1 received the name "Nikke" from the donor Nippon Keori KK (Nippon Woolen Co Ltd), a member of the Kawanishi zaibatsu. 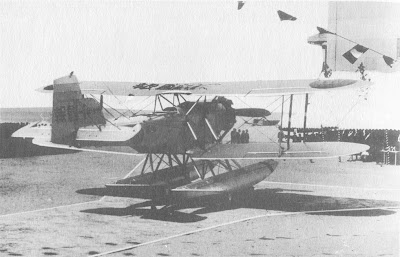 Another photo of the aircraft from the Arawasi collection. 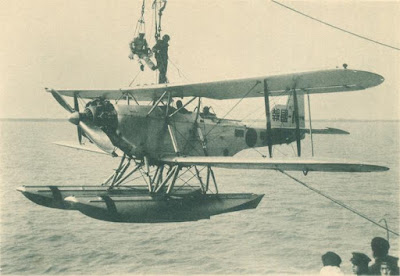 You can see where the E7K evolved from, always nice to see these rare types. Thanks for posting!