When I was a kid back in Greece some of the publications I used to enjoy were the war comics that were quite popular among boys. The fingers became black from the ink of the cheaply printed and priced magazines and each weekly issue lasted more than seven days, the stories being read over and over again. I remember spending hours carefully cutting the best figures making paper soldiers for fantastic battles and stories of my own. I also remember insisting to give my pocket money to the poor old guy running the kiosk near my place only for issues that had stories with Japanese involved and definitely Japanese airplanes. I guess that's how it all started for me.
It was only a few years ago and thanks to the net that I discovered that my childhood comic mags were actually the Greek versions of British publications often with different name like the examples below. 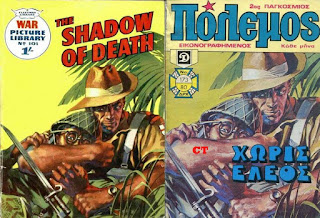 "WAR" became "2nd World WAR" in Greek and the original title "THE SHADOW OF DEATH" became "NO MERCY". 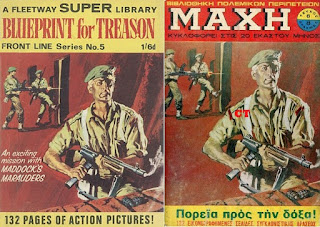 "FRONT LINE" became "BATTLE" and "BLUEPRINT FOR TREASON" became "Road to glory!"
A few weeks ago I discovered the website of the magazine "COMMANDO" where I was able to find covers of old issues. How different and sometimes funny they look now after so many years.
Take for example, the cover of issue No. 4383 by Ken Barr showing a Mitsubishi "Pete" under attack by a Hawker Hurricane. 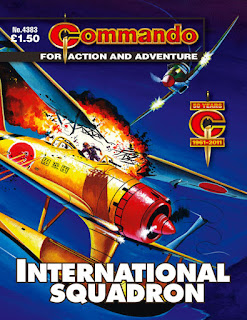 Note the bright overall yellow (trainer yellow-orange perhaps?!?!) and the red cowling of the "Pete" as well as the tiny pilot and the gibberish "Japanese" on the fuselage side.
The story went like this:
"South Africans in Catalinas, French in Dewoitine fighters, British in Hurricanes... what a terrific bunch they were!
They fought among themselves, they scrapped with the Japanese - and to crown it all they had a German saboteur and spy in their midst creating more havoc!"
Now, that's a story I'd like to read!
Posted by Arawasi

Lovely stuff Giorgos! MAXH was my favorite and I still remember myself keeping an album with all types of ww2 aircraft I had drawn from each issue!1975 was the year I started doing that!

Do you still have those drawings?
If yes, send them over and I'll put them up.

The artist who did the "Pete" seems to have been inspired by the earliest Aurora plastic kit of what they called the "Zero".
Yellow with red cowling indeed, LOL!

Unfortunately, I haven't got them!