The November 1940 issue of the vintage magazine "Koku Asahi" introduced the "Kaigun Yobi Kokudan" (Navy Reserve Air Group) of the IJNAF.
The programme involved university students who wished to become Navy pilots upon graduation from their universities. The enrolment period started from the middle of April until the beginning of May with the main test in October. This included physical examinations and the candidates, among other requirements, had to be above 1.55m, over 48kg and had girth of over 78cm. The written part of the test included Japanese language, mathematics, English and general knowledge.
The candidates who passed the test flew with a flight instructor for a hands-on evaluation and only then they could become a member of the "Kaigun Yobi Kokudan".
With this programme university students could fly in the afternoon of every weekend, public holidays and in general whenever their university was closed. During the summer holiday they could stay for about two weeks in a nearby IJNAF kokutai base to get a taste of the military life. The whole programme was free and was sponsored by the state.
Upon completion of the course the graduates had to take further tests before joining the Navy with a rank higher than kashikan (low rank officer) and move to one of the Renshu Kokutai (training units). The programme also offered the possibility of joining the civilian aviation sector.
Headquarters of the "Kaigun Yobi Kokudan" was in the "Shisei Kaikan" (Municipal Assembly Hall) in the Hibiya district of Tokyo. The building is still standing (photo below from Wikipedia). Branches were in Haneda Airport, lake Biwa (otsu), in Fukuoka's Dai 1 Hikojo, in the International Airport of Nagoya and the airport of Sapporo. 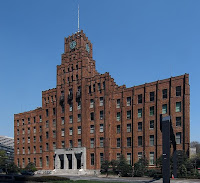 In the photos below "Kaigun Yobi Kokudan" members fly Yokosuka K4Y1 (or Navy Type 90) Seaplane Trainers over lake Biwa. The seaplane in the foreground has the civilian registration J-BBPZ and the one in the background J-BEHD. For more about the type HERE. 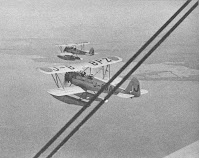 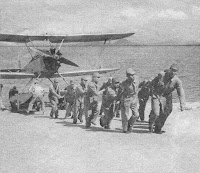 Fascinating; a little like ROTC at many US universities. I have never before read anything about this program in Japan.
Interesting that English was one of the subjects tested for; demonstrating its importance in aviation worldwide then as well as now.

Thank you Harold. What is ROTC?

ROTC = Reserve Officers Training Corps.
Basically, a college student can get some or all of his/her tuition paid in exchange for serving for a set number of years after getting a degree. The student gets military training during the academic year and during the summer break. Upon graduation, the student is commissioned as a second lieutenant or ensign (depending on service).
See Wikipedia for more detail.

Thanks again Harold.
Yes, I noticed too that English language skills was one of the requirements as IJNAF was traditionally closer to the British. The IJA usually learned Russian getting ready for the "strike-North" version.