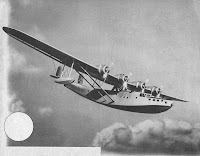 ﻿
The June 5, 1940 issue of the magazine "Asahi Graph" featured an ad of the forthcoming civilian passenger flights by "Dai Nippon Koku" from Japan to South Pacific with the new "Mavis" flying boat:

"Kuroshio" in the sky of the South Sea
Very soon the flying connection to South Pacific will be serviced by two 17-passenger flying boats. Initial test flights were very satisfactory and the forthcoming flights will be on the Yokohama-Saipan-Palau route.
The Kawanishi Flying Boats have a max speed of 280km/h and are the first civilian 4-engine flying boats of Japan. There are beds for four passengers and seats for 17 while there is a crew of eight members including an "air-boy". An amazing flying boat built in Japan. Together with the forthcoming Mitsubishi MC-20 11-passenger airplane, the transportation capacity of our country over the air and the sea will receive an excellent representation.
The new flying boat of "Nippon Koku", photo above, received the name "Kuroshio" and the registration J-BFOR. In the photos below on the left we can see the luxurious beds for four passengers while in the photo on the right we can see that the passengers can enjoy the outside view from every seat.

There are not many interior photos of the Kawanishi H6K "Mavis". Here we present two of the interior of one of the 16 H6K2-L, the civilian version that was operated by the airline Dai Nippon Koku.
The name "Kuroshio" comes from the ocean current, HERE.