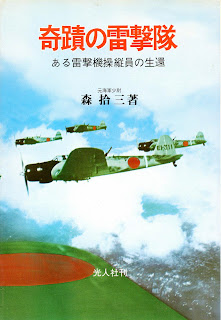 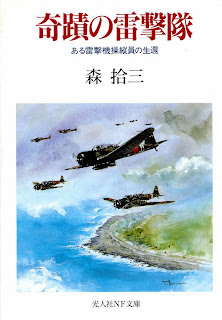 About the author:
Born February 1917 in Saitama pref.
June 1935 joined Yokosuka Marine Corpse
Nov 1935 KasumigauraKu
Nov 1937 graduated with the 38th Pilot Trainee class. Assigned to Tateyama ku, carrier attacker pilot training.
April 1938 12Ku
Jan 1939 KasumigauraKu
Sept 1941 OomuraKku and then assigned to Soryu carrier attack unit. Participated in Pearl Harbor, , Midway.
July 1944 YatabeKu
"The order to attack the enemy airfield on the very next morning on October 17, 1942 came during dinner time. The planes in aircraft carrier Junyo's hangar were equipped with torpedoes and the crew worked frantically to change these to 800kg bombs. In the cramped space of the hangar and during high seas the crew was constantly thrown all over the place with occasionally somebody hitting his head on a prop and all shorts of accidents.
Installation of the bombs was completed around midnight and everybody was soaked in sweat. In a ground unit the personnel would normally have the chance to take a shower but on a ship the only hot water is in the kitchen. During a meeting regarding next day’s operation it was decided Mori to fly plane No1 with No2 flown by PO3c Kawasima Koji, who had hit Utah with a torpedo during Pearl Harbor. No3 was flown by PO1c Sato Chosaku who was a new Junyo member. The other crew members of Mori’s plane were observer WO Yashiro Shichiro who was also section commander and radio operator PO1c Watanabe Yuzo.
According to reports there were more than 100 enemy aircraft on complemented by very accurate anti-aircraft artillery.
The orders were very strict. Every plane was to stay in formation at all costs even when attacked by enemy fighters. They should not stray away from No1 plane until they had all dropped their bombs. The radio controllers should always be on the lookout for enemy a/c ready to drive them off with their machine guns and the observers should always be vigilant even after dropping the bombs. The meeting lasted until 1:00 in the morning and after only two hours of sound sleep the pilots were ordered to wake up, get suited and after breakfast went to their planes in the hangars. The maintenance crew were already carrying the planes on the deck. After having their engines checked and test started t was found that nine Zeros and nine Kates were in good condition to participate in the operation.
All crew members scrambled for a morning call by Air Unit CO. The instructions were explicit, even if hit by enemy fire do not try suicide crashing but instead try to make an emergency landing on the beaches on the west side of . At 4:15 all the aircraft started taking off with the Zeros first and the Kates next. It was 200miles to and it would take them about 1h30min.


A total of 18 Zeros and 18 Kates from the carriers Hiyo and Junyo participated in this operation with overall commander Zero pilot LCDR Shiga Yoshio. All the planes gathered at about 1000 meters above flagship Hiyo and headed towards Guadalcanal. At some point Mori raised his hand and using hand signal indicated to the other pilots to change to the main fuel tank. All communication between the planes was done by hand signal. Suddenly the No2 plane of the first shotai (section) fluttered its wings, lost altitude and returned back to the carrier possibly due to engine trouble. The flight continued uneventful with the all the planes positioning themselves to bomb from a Northern direction. It was the first day in combat for Commander Ito.


Anti-aircraft guns start filling the sky. The observer of the Buntaicho (Division Officer) Ito raised his hand giving the clear skies of enemy planes signal and then proceeded to bomb. At exactly when they about to release their bombs, the buntaicho observer gave the signal to abort the bombing by waving his hand, then the plane turned left and started to correct the bombing position.
Mori was particularly incensed. Ito was a nice person but without combat experience and it’s impossible to go to battle with commanders with only stripes. At that point they were able to spot two enemy cruisers, two destroyers and three large size transports, all apparently surprised by their presence and trying to leave the area in full speed. Mori changed course and positioned his plane again into a bombing course but looking around him saw no escort Zeros. The orders for the Zero pilots were to escort the Kates and stay with them, not to engage in any one-on-one air battles. So perhaps they thought the Kates had already dropped their bombs and so started leaving the area.


While Mori was still in a bomb course and ready to release his bomb he suddenly saw about 30 Grumman fighters filling the sky and ready to attack the Kates. A rain of bullets showered his plane. The enemy pilots knew the Kate didn’t have any forward-firing machine guns so they opted for frontal attacks. During all this time the Kates were still in formation but with the enemy planes attacking, Mori suddenly found himself completely alone flying at an altitude of about 4,500m. At that point he saw the Hiyo Kate unit in their bombing course and thought of joining them. When he turned to get into position, five Grumman fighters came down on him. In front of his windshield there was a red fire of bullets and thought that if he was going to die at least he could crash his plane against the Grumman in the middle and take with him as many as possible. With renewed determination and in full speed he started flying straight towards the enemy. Stubbornly courageous and fearless he disregarded the anti-aircraft fire and the rip-rip sound of the bullets hitting his plane and continued towards the enemy planes as long as his engine was still running. The trouble was when he was getting close to the Grummans, also flying at high speed, they were all getting out of his way. Perhaps the enemy pilots were surprised by his audacity but in any case it seemed he had escaped them. While trying to change course though the controls were unresponsive. Even though he pulled the stick the plane didn’t respond. Looking right in front of him the control panel were full of blood and all the instruments except a couple were destroyed by bullets. He thought he was shot, maybe in the belly, but it didn’t hurt…looking down he saw to his complete surprise that his right hand from the wrist was missing with blood spouting all over the cockpit. At that moment he thought he was done for and decided to crash his plane at the closest ship. He told the other crew members that he was injured and his decision. While in a dive towards the closest ship, his observer told him that if he was not seriously injured they should try to make an emergency landing at some beach. Yashiro said that after only one of Mori’s fingers had flown back to his seat and therefore thought that Mori was not seriously injured. Mori then levelled the plane, controlling it only with his left hand while the plane still carried the 800kg bomb (!!!), pull some rubber bands out of his trousers and by tying them around his hand and keeping it raised tried to stop the blood. Somehow he managed to ditch the plane near a beach where a group of 10 Japanese infantry soldiers rushed to pull them out and take them to the jungle. His radio man and observer were uninjured."

After the end of the war, Mori-san run an izakaya called “bashaya” (horse-drawn carriage). Fighter pilots often teasingly called the Kates "carriages laden with bombs or torpedoes". The nickname the Kate pilots gave to fighter planes was “stanya” (carriages of stuntmen) and the pilots were called “kigurui okami” (crazy wolves).
Mori-san passed away in 1984.
Posted by Arawasi

Thank you for the translation, sir!

Yes; thanks for presenting this excerpt.
There is so little from the period that has been translated into English. I can think only of Caidin's book about/with Sakai, and Hara Tameichi's excellent "Japanese Destroyer Captain".
It seems that Mori-san's book would be a great candidate for a good translation; I'm sure there are others.