In the final months of WW1, appeared on North Sea a formidable german seaplane: the Hansa Brandenburg W.29. It was a project from a young Ernst Heinkel, basically a monoplane version of its predecessor, the W.12. The W.29 obtained many victories in the hands of the pilots and observers of the German Navy, amongst them an airship destroyed and an english submarine damaged. At the end of WW1, the W.29 was produced under license by other countries like Denmark, Finland and Japan. The Japanese version was built by Aichi and was named Mi-Go. The main difference was the installation of a different power plant, the Hispano Suiza 300 hp. instead of the Benz and Mercedes of the German ones. The “Hisso” was produced by Mitsubishi for the licence-built Nieuport-Delage Ni.29, the Ko.4, and named simply “Hi”.

After I discovered a scratchbuilt version in 1/32 in the Forum “Large Scale Planes” where I found a photo of the color pages of Arawasi magazine #7 with the civil version coded J-BAWI I started to think to realize one in 1/72 scale. Rising Decals heard my wishing and produced a beautiful decal sheet dedicated to J-BAWI. I’m an Italian modeler and on the Forum where I’m a member (Modellismo Più) started on 1st January a Campaign about Japan on all of its expression. This was the last push to me. I started to search every infos about Mi-Go and I sent an email to the editor of Arawasi asking for that. Mr. George Eleftheriou was really kind and helpful with material and this is my subject from the decal sheet from Rising Decals:

This was my starting points: the kit is the 1/72 Eastern Express with photoetched set from Part, Rising Decals, Hispano Suiza from Aeroclub and the Datafile about the W.29 as references. The Datafile was useful only for the scale drawings, because the Mi-Go was not covered in the publication. The main problem realizing every version of the W.29 is find original photos or drawings about internal arrangement. No original photos are available and to present we have only a real one example of a license-built W.33 in Finland. The W.33 is 1/5 more large than the W.29, because of the installation of a more large and powerful engine. For a modeler like me, using fantasy to build a model is a little bit annoying, but also the beautiful kit of Wingnut Wings is based on the same aircraft and finally I decided to use their instructions to build mine. 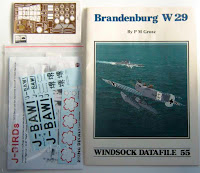 First steps were to clean the interior of the fuselage from the structure molded inside and to cut out the superior part of the engine covering. A base of Humbrol 9 Tan was painted for the oil colors to reproduce wooden effects:

Assembly of the photoetched fret for the internal structures was simply, I used also the dashboard (adding a little map!)and the control wheel from the fret. The main petrol tank under the pilot’s seat was scratchbuilt, same treatment for the oil one in the observer office. I added scratchbuilt rudder control pedal, hand petrol pump and seat belts to pilot’s seat and used an Eduard photoetched seat for the passenger. I hope that the civil version had more comfortable seat for the passenger than the folding one of the military one!
Fuel and oil tanks. 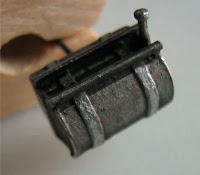 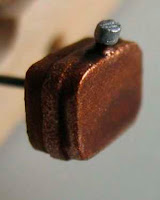 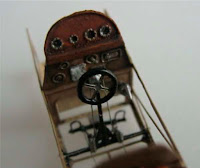 The fuselage was assembled, adding a triangle of plasticard in the under surface of the front section. The Mi-Go had straight and short nose profile viewed from high, due to the arrangement of the cylinders of the Hisso, eight divided in two bankers instead of the six cylinders in-line of the Benz and the Mercedes. I added few accessories to the beautiful molded Aeroclub Hisso and installed in its place. 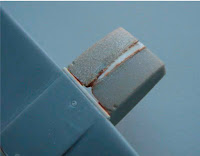 I had enough space to add another scratchbuilt tank behind the engine. I used cyano glue to fill the little spaces between two fuselage halves, the kit is more near to a short run one but junctions are good. Only the end of the fuselage need an addiction of plasticard to represent correct profile. Also the floats needs little filling after assembly, I added the steps to the frontal structure, made by copper wire. Struts needs some sanding to reduce thickness and surprisingly the central strut in the central “N” is missed from the kit molds. I added this from the Contrail struts bag. On 0,5 mm. plasticard sheet I drawn, shaped in hot water and cut the new cowling for the engine. Placed with the help of the new frontal radiator cut from 1 mm. plasticard sheet. Added also the support for the pilot’s windshield. 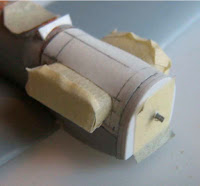 Ready for painting, other doubts were come to me. What color? The decals instructions and color profiles on Arawasi #7 said “aluminium dope” but Mr. George Eleftheriou and my friend Carlo, really experts on the field, suggested to me that a light grey is more probably. My doubts about grey coming from sun reflections in the original b/w photos from the fuselage and floats. They are too bright for a grey finish. The airplane came from military surplus and was sure restored, changing the observer office arrangements and, why not?, repainted. In the thirties I’ve noted that aluminium dope was in use on fighters as the Ko.4 (Ni.29) and finally I choose this finish. Hope that George and Carlo don’t hate me for that! In the photos J-BAWI is placed on the beach of Sakai, standing on a trolley on railways that were used to move it from the hangar to the sea. My friend Enrico gifted to me an HO railway that I cut in two to double the space between rails and I had scratchbuilt the trolley, made by iron and covered in wood in reality. The base for the diorama with railways in place and the metal structure of the trolley:

I sprayed the model with Tamiya TS-17 Gloss Aluminim, decalized it and sprayed with Vallejo satin for the final finish. The decals are very thin and simply to place. My friend Francesco gifted to me the perfect wire mesh to reproduce radiator frontal grid. The four blade airscrew came from Roden’s SE5a, treated with oil colors again to representing dark wooden effect. From a surplus windshield of a Nardi FN.305 I can cut the rear one, glued in place with Tamiya green cap extra thin cement. That’s the final result: 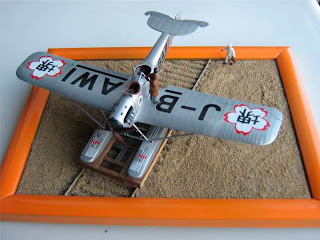 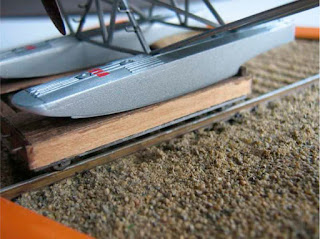 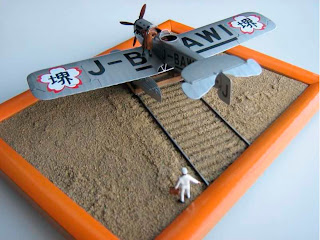 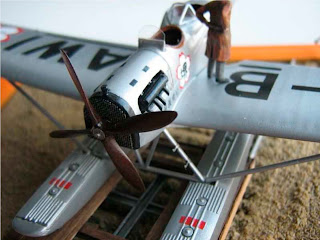 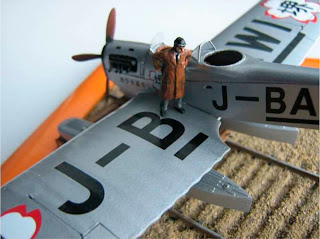 The little scene representing the pilot that wait for the mechanic because “something wrong”. Pilot is a Preiser mix (head + body) and mechanic is an Airfix (really bad plastic!).
I want to say a big “THANK YOU” to Mr. George Eleftheriou, you know that without your photos and kindly support I never started this model! Big thanks also to Carlo Reita, Enrico Crespi and Francesco Franchi, without them I cannot complete the J-BAWI!
Best wishes to all,
Roberto Anderwill
Posted by Arawasi

Another great entry, this time with a very unusual subject. Wonderful job of scratch building too. My vote is 4.8

This is absolutely superior. The model and building process are to the highest standard: Thorough investigation of the subject, search for all material that can help, informed guessing if information is missing, love of detail, nice scratch-building, creativity, fabuluous execution, funny diorama and good photography. Extra points for the unique subject - an excellent exhibit, Roberto. For me a clear 5.0+

I am biased as I had the pleasure of following the work of Roberto in real time (and his thanks are appreciated but totally undeserved).
For me is one of the best realisation I have seen lately and of very unusual subject so I give it a 5.

Publishing of my work it's something like another gift received from George. I want to say another thank you to him.
Reading to the comments is another great surprise. The project of the Mi-Go lied in my fantasies for years and when I finish the "puzzle" about infos, decals and original photos I started finally!
Receiving so much good appreciations to my work is fantastic. Modelling for me is only enjoy my free time! Thank you to everyone that give to me so high valutation!
Roberto

I'm with the rest, nice build, nice markings, nice to see something unusual. I'll go 5.0 because of it.

Amazing work, and on a very unusual subject. 4.9

WOW..!!! This is modelling at a high level.Nicely done on all the details. A little nitpicking, i think you could enhance some parts, like the floats, by using a wash in the panel lines. But beside that, this (unusual) plane and the whole setting is a pleasure to watch. My vote : 4.9

Superb modelling of a very unusual subject.As near as modelling perfection you can get. Very well done. 4.9

I worked that kit so I know how difficult it is to tackle those parts. Especialy the engine taht is a model on itself.
Congratulation for the corrections and scratchbuild extras.
Nice rendition of wooden plaque.
Nice and simple dio that let you focus on the plane.
4.8 from me.