As we saw in the previous post, training with the Nakajima A6M2-N “Rufe” started in Yokosuka but very soon pilots and available seaplanes were needed in their originally intended role i.e. to protect remote islands until proper airfields were built. The first unit this mission was assigned to was the Yokohama Ku which was responsible with the training of flying boat crews since October 1, 1930 when the unit was organized with four flying boats and two spare. At the beginning of the Pacific War it had 24 Kawanishi E7K “Mavis”, a number of them were dispatched to Rabaul on February 14, 1942 and on April 1 became part of the 25th Koku Sentai.

It is not known exactly when the Rufe unit was organized within the Yokohama Ku. Some sources mention April 1942 but Izawa Yasuho in his “Koku Journal” March 1977 article entitled “Nihon Kaigun Suijo Sentoki-tai” (Seaplane Fighter Units of the IJNAF) mentions that the Rufe unit commander, Lt. Sato Riichiro, was officially assigned to Yokohama Ku on May 15; so most probably the unit was organized around that time. Also, again most probably, the pilots and aircraft came originally from Yokosuka. The Yokohama Ku Rufe unit arrived in Rabaul on June 3 with 12 seaplanes. According to Akimoto Minoru (in Part #16 of his “Nihon Kaigun-ki Ma-ku-shu” (collection of IJNAF Aircraft Markings) Koku Fan November 1980 issue) they were based in the Green Islands (here) and a small detachment was dispatched to Makin Island (here).
The main source for the Yokohama Rufe unit in the South Pacific, and main source for the Izawa article, are the “Kodochoso” reports (Hiko-tai Sento Kodochoso – Aircraft Unit Battle Action Report). Although the Yokohama Ku reports of the flying boats are very detailed with even the names of crew members of each Mavis, unfortunately the Rufe reports are meagre and confusing in details. But they are the only source from the Japanese side.
According to these reports the unit started patrols in the Rabaul area from June 5.
On June 10 a group of five Rufe seaplanes commanded by WO Hirabayashi Yomichio encountered an equal number of US aircraft while on patrol between 05:45 ans 06:45. One of the seaplanes attempted to intercept but with unknown results.
On June 26 two Rufe, one flown by PO1c Hori, escorted the cargo ship Fujikawa Maru from 06:30 to 09:20. On the same day a single Rufe flown by PO3c Nomura flew patrol over Rabaul.
Until June 29 the Rufe unit flew daily patrols in the Rabaul area with as few as three and as many as eight seaplanes. During that time they were many encounters with enemy aircraft but no air battles took place.

In early July the flying boats of Yokohama Ku advanced to Tulagi first, followed by the Rufe unit. Although the island of Tulagi is mentioned, actually the Rufe and the Mavis of the Yokohama Ku were based principally in the adjoining islands of Tanambogo and Gavutu respectively. The Rufe were there to provide air cover until the airfield on Guadalcanal was built and started daily patrols from the 5th of the same month.

On July 10 they intercepted two B-24 claiming one shot down with one Rufe damaged,
The book “Under the Southern Cross: The B-24 Liberator in the South Pacific” by Bob Livingstone has the following entry:
“AL515, by now named YARD BIRD and ASV radar equipped…flown by Lieutenant Casper…
On 10 July, AL515 (Casper) and AL573 (Ezzard) made a reconnaissance of Tulagi, followed by a bombing attack. After the bombing they were intercepted by floatplanes later identified as Nakajima A6M2-Ns, code-named Rufe. AL573 was damaged, though one floatplane broke off the attack with one wing smoking. 25 The LB-30, flown by Lieutenant Wallace Fields with Captain Dick Ezzard riding as check pilot, had number three engine shot out of commission, but the camera operator took a photograph of the two aircraft in one frame. It is thought that this was the first photographic confirmation of the Zero floatplane in action. The crew tried to release an empty bomb bay tank to reduce weight, but with the existing "Rube Goldberg salvo system", the tank only partially dropped and then jammed. The return to Port Moresby was made on three engines with the empty bomb bay tank protruding from the bomb bay; the flight engineer had his shoe sucked off in the slipstream trying to kick the tank out.”
On July 17 two Rufe seaplanes intercepted and claimed to have shot down one B-17. One of the seaplanes flown by 1stWO Hori Tatsuo was shot down with the loss of the pilot.
The book “Guadalcanal: The American Campaign against Japan in WWII” by Dr. Jon Diamond mentions:
“On July 17, 1942, three weeks before the invasion, Lt. Col. Merrill B. Twining, the division's deputy operations officer, and Maj. William McKean made a photographic reconnaissance flight aboard a B-17 from Port Moresby. Although Japanese naval float planes stationed at Tulagi drove the bomber off, Twining did obtain photographs of Guadalcanal's northern coast as well as the Tulagi area across Sealark Channel.”
After that, a Rufe flown by Lt Fujisawa Yoichi took off in an attempt to locate Hori's aircraft but in vain.
On July 23 there was an air battle and PO1c Matsui Saburo didn’t return to base.
This site mentions:
“THURSDAY, 23 JULY 1942: 11th Bombardment Group (Heavy) B-17s on New Caledonia Island begin photo reconnaissance of the Guadalcanal-Tulagi-Gavutu area in the Solomon Islands.”
But I was not able to find any more details regarding an encounter between Rufe and US aircraft.
On August 1, at 09:20, six Rufe tried to intercept three B-17 but without any results. An hour later seven B-17 were again intercepted by six Rufe. Three B-17 received heavy damage. All 12 Rufe returned to Tulagi at 11:00 having spent 225shells of their 20mm cannons and 550 7.7mm machine gun bullets.
The book “Air War Pacific: Chronology: America’s Air War Against Japan in East Asia and the Pacific, 1941 – 1945” by Eric Hammel mentions:
“August 1, 1942: SOLOMON ISLANDS: 11th Heavy Bombardment Group B-17s based at Efate/Vila Field attack the IJN seaplane base at Gavutu Island. Two A6M2-N float fighters are downed.”
The publication “Pacific Counterblow: 11th Bombardment Group and the 67th Fighter Squadron at Guadallcanal” [Wings at War No. 3] mentions briefly:
“On 1 August the B-17's bagged two Zeros...”
This “Kodochoso” entry confirms that their were twelve Rufe seaplanes in Tulagi as of August 1st. There is no mention of any lost Rufe.

Here's a NARA photo of the seaplane base on Tanambogo island under attack. 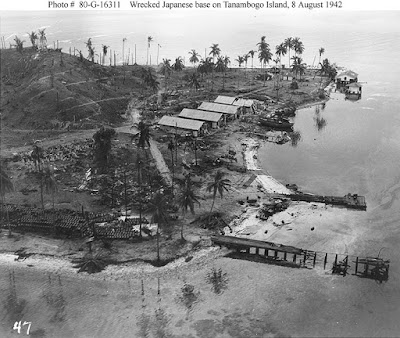 At least one destroyed Rufe can be seen and note the slipways. “Pacific Wrecks” has a little more on the Rufe seaplanes on Tanambogo island, here. The site mentions that seven Rufe wrecks were surveyed by US forces after the island was secured, although there are doubts.

The “U.S.S. Wasp” book also mentions:
“Wasp returned the next morning, 8 August, to maintain a continuous CAP over the transport area until noon...At 0815, Snowden sighted a “Rufe” some 40 miles from Rekata Bay and gave chase. The Japanese airman, seeing that he had been spotted, had no stomach for a fight. He pulled up and attempted to use the clouds for cover. Each time the dogged dive bomber pilot gunned the SBD-3 after him: twice the “Rufe” headed for the clouds. Snowden finally pulled within close range, and using his two fixed .50-caliber guns, fired a short burst that hit home, causing the “Rufe” to spin into the Solomon Sea.”
I would say that this account is suspicious in that there were no other Rufe seaplanes in the area, except those destroyed on Tulagi. Also, Rufe pilots of the Yokohama Ku, as we saw above, were on daily patrols encountering B-17 and B-24 bombers showing sufficiently aggressive “attitude” towards enemy aircraft. I doubt that a Rufe pilot would have “no stomach for a fight” against an SBD-3.
Perhaps the floatplane was a “Jake”?

According to Izawa, from August 26 until September 1, one (or two) Yokohama Ku Rufe flown by WO Kofuji Hisateru was based in Shortland island and performed patrols.
Akimoto mentions that on September 23 the remaining Yokohama Ku members returned to Rabaul and then to mainland. (Tulagi survivors?)

To summarize, there are conflicting numbers of Rufe on Tulagi on August 7. Numbers range from seven to nine. At the moment we have not confirmed the presence of Yokohama Rufe seaplanes on Makin or Shortland islands before or after Tulagi. One B-17 is confirmed lost on August 7 before the US attack occurred. Could it be that a small group of perhaps three Rufe took off after that incident, were on patrol during the US attack and instead of fighting against the overwhelming US forces somehow escaped to Rabaul? That would possibly confirm the above “U.S.S. Wasp” account and the presence of Yokohama Rufe on Shortland but for the moment no evidence to support this claim has been found by this author.

On October 1 the unit was reorganized in Yokohama with 16 flying boats in its strength. On November 1 the unit changed its name to 801 Ku.
According to Akimoto the tail marking of the unit until November 1940 was “ヨハ” (katakana YOHA). After that they used the letter “Y”. AFAIK there are no photos of Yokohama Ku Rufe until the destruction of the Tulagi base so no tail markings can be confirmed. Since these were early production Rufe most probably they were finished in overall gray paint but in all possibilities they received some camouflage either in Rabaul or in Tulagi.
Feel free to leave a comment or email if you have more information.
Posted by Arawasi

Thank you for such an in-depth post! I think many opposing fighter pilots found the B-17 a tough target, also to almost the same degree, the B-24. I also doubt that a "rufe" pilot would turn tail and run from a SBD, even though the latter proved in more than one instance that it could be used as a "fighter" once it's load was dropped.
As the war dragged on, the "Rufe" pilots obviously had their hands full. Too bad there are not any photos showing at least one plane in reasonable detail.....

Very nice essay on the Rufe!
I enjoyed reading all three thus far published parts. If there is more to come, I suspect you're continuing chronological? Especially looking forward to the Netherland East Indies part, in case.
A thrill of anticipation! :)