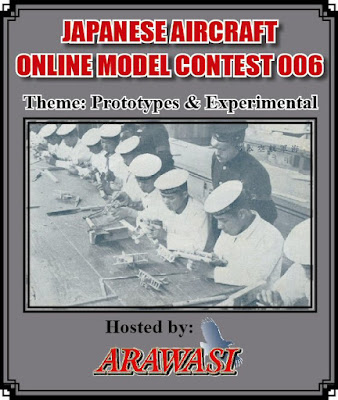 ARAWASI would like to invite you to our 6th online model contest.

Theme: Japanese Prototype & Experimental Aircraft in any scale (no what-ifs)*.

Deadline: December 31 (but it can be extended)

Prizes: The winner (or winners) will receive a book and a kit from our on-line store, free of any charge, courtesy of Arawasi.

*Allow me to elaborate to avoid confusion.
1. Apart from the actual prototypes that were built and tested, the IJAAF and IJNAF had a number of projects and designs that never left the drawings board or were just considered. Models of all these aircraft are within the theme of this competition. In other words, whatever prototypes or experimental aircraft the Japanese considered, designed or built at that time. A "Fugaku" or a "Ginga" with an "Ohka" in its belly are in; a twin-boom Zero is not.
2. Markings & paintjob. Prototypes and experimental planes usually had very specific markings, those of the Kugisho of the IJNAF for example, or no markings at all. Therefore a KEN-3 in 244Sentai markings falls into the "what-if" category as the type was never assigned to that unit. There is more leeway for the markings of design-only X-planes or for those no photos exist. But again it is advisable to study the way other X-planes looked before starting to work on the paintjob or to apply markings. Or, preferably, start a posting here with the model you intend to build and ask questions. For example all the markings for the Mansyu Ki-98 supplied in the Meng kit fall in the "what-if" category. Extremely unlikely the IJAAF to have supplied the Thai airforce with the type!
In other words, models of X-planes with plausible and realistic markings and paintjob are in, X-plane models with completely fantasy markings and finish are also in but will be judged accordingly.

The theme for the next online model contest is "Opposites Attract!" (captured aircraft; Allies by the Japanese or Japanese by the Allies) and will start from January.
Posted by Arawasi