Below are photos of my recently finished Nakajima Ki-27 "Nate", Hasegawa 1/48, belonging to the 68th Shimbu-tai. I had no problems whatsoever with the fit of the classic kit, removed the flares on the starboard wing rear edge and the drop tank access holes. There are no references showing what kind of drop tanks these "Nates" used or how the 250kg bomb was attached to the fuselage so I decided to leave them out. The decals are from the Create 301 (Aeromaster?) "Special Attack Squadrons" (1996) which had fantastic rendering even though they were very delicate and cracked. I feel though that the front part of the thunderbolt should not reach the front edges of the cowling. They overall result is really beautiful. There are only two photos of the unit featured on p.92&93 of MA#451 and they show the aircraft with the hinomaru having a darker green surround, to cancel the high visibility white surround. The Create 301 decal set does not provide hinomaru with the surround, so I had to mask. As always, I used MrColor paints.
About the base. I used the chocks and the barrel from the Hasegawa set and added the ropes, scratch built the ladder and attempted to replicate the pieces of cloth often used to cover the aircraft to protect from the elements with cigarette paper. I used the Tamiya "Soil Effect- Dark Earth" from the "Diorama Texture Paint" series for the airfield ground with sprinkles of grass from KATO railway diorama accessories. I wanted to add a bit more ground equipment and a pilot with a ground crew but wanted to finish it as soon as possible. More about the base soon.


The 68th Shimbu-tai was organized on March 23, 1945 with 12 Nakajima Ki-27 "Nate" from Hitachi Kyodo Hikoshidan (Flying Training Division). On March 30 seven planes led by unit commander 2Lt Yamaguchi took off from Maewatari airfield, Ibaraki Prefecture which was the name of the airfield of the Mito School and after stops at Sagami, Tenryu, Kakogawa and Ashiya airfields finally reached Chiran on April 5. The 68th was to take part in the Dai 1ji Koku So-Kogeki (First Massive Air Attack) but the planes were in badly need of maintenance so none participated. On April 8, at 6:30, 2Lt Katayama took off and attacked enemy ships in the Okinawa area. On the same day at 19:30 2Lt Yamada took off from Kikaijima with the same target. On April 9, at 17:40, 2Lt Yamaguchi also took off from Kikaijima and also perished in the Okinawa area. 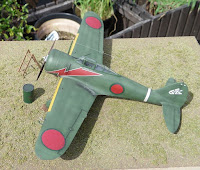 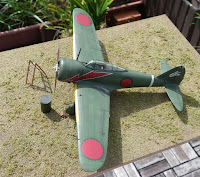 Superb result George. I like the fine coloring with dezent dark panel lines.
You only should cut out the antenna cable in the front of the antanna mast.
Nice sun weather in Japan.

Very fine job, George! the weathering is very well balanced, I'd just make the undersurfaces a bit dirtier. I like the subject. For a more realistic touch, cut the hinomaru decals along the ailerons line. that's all!
my vote: 9

A great model on a lovely diorama base. The spangled grass looks very convincing. And so does the Ki-27.
I see that you struggle with the antenna, George. My trick is to cut a small cleft into the top of the mast with the cutter - just very slightly without inadvertently splitting it - and to fix the wire in there with superglue. Then cut the surplus. If the wire ends a little further down on the antenna mast I first top 1 mm off and add this piece again after the procedure. You may create isolators by fixing a small drop of thick acrylic glue to the wire, form it with pincers while drying and paint it white (bakelite).
A stable antenna mast which withstands some stretch without bending is another story...

Thanks a lot guys.
Much appreciated Michael but what material do you use for the line? Wire, fishing line, hair, stretched sprue or something else? I've tried fishing line but it was very difficult to glue. Hair has worked best so far.

Dear George, if I can add my suggestions try with the fishing line. It's stronger and can hold occasional (light) encounters with the fingers! Fixing the antenna line is one of the most stressing job in modelling but some practice and a lot, lot, lot of patience will give you great satisfaction. My tecnique in this case is a bit different from Michael's one. I generally begin to fix the line from the tail - where possible I place and fix the fishing line before closing the two fuselage halves. In any case, when the acrylic cement is well dry before proceeding to the next step I fix a small piece of tape to the line's end. Then I pull the line up to the antenna mast top which I have previously cut just a tad to provide a flat -although very small - surface where I carefully lay the fishing line. Once the line is in place patiently stick the line's end with the tape to the nose and after this just add a small drop of cement to the top of antenna mast. After it is dry cut the line in excess with a perfectly sharp blade then you can remove the tape with the line in excess.
For imitating the isolators I use either drops of acrylic cement or crystal clear.

Very nice! I like the finish, weathered, used, but not beaten up. The Nate looks particularly attractive in green, the lighting bolt adds to it as well! The base is very convincing, the ladder, wheel chocks, and oil/fuel drum add to it.
Really like that last photo taken a scale eye level.

For antenna wire material I have used sewing thread from the early beginnings (my wife worked in the fashion industry and is usually my last resort if I need special stuff for my hobby). My favourite is thread as needed for Overlock sewing machines. It is from plastic fibre (not wool or cotton), very thin, extremely resistant and has a nice shimmer. Due to the plastic basis it reacts well with super glue and it can easily be pulled off without damage in case of a mistake. The downside is the price and the large size of the roll.
Regarding colour I prefer black for various reasons: (1) I want the wire to be visible, (2) if you look out of your window at any wire around they appear black (not copper or silver), (3) I also build biplanes and the antenna needs to look different from the rigging which is aluminium or grey, and (4) as follows:
For the wire end that runs into the fuselage I use hair from a brush or broom, which is also black. There is an incredible lot of useful material in the household! Depending on required thickness I cut it from a hand broom or from a painter's brush. The hair needs to be stiff but flexible. Due to the plastic material it again attaches easily with super glue. Any excess can be cut off with scissors.
My wiring method is very similar to Danilo's except for the little cleft I mentioned which prevents that the wire end sits on top of the mast (you could hide it under a drop of glue, though). I don't use tape, just hold the thread for a second. I also start from the rear but with no wire in my way while I work on the model. Depending on the original wire attachment I have two basic methods: If the wire runs directly out of the tail plane I just leave the upper end un-glued when merging the fuselage halves and insert the wire later, then close it and touch it up with enamel. If there is a small stump (like most Japanese planes have) I drill a small hole into the top of the stabilizer and insert a piece of very narrow photo-etch sprue bent around to form a double layer. Thus the short end showing out is split at the top and the wire can be squeezed in-between.
That's it, George. With a little practice it is not stressing anymore. What really throws me off is when I inadvertently break the antenna mast, but I have a technique to resolve this, too...

George, now you have no excuses, You have been submitted a full encyclopedia chapter about the building of an antenna wire in a model. Very interesting methods by Michael too. Reading through the second Michael's method I've got an idea -that must be practised about. Drill the hole in the stabilizer then prepare the wire and the photoetched sprue apart: choose the proper photoetch sprue, at half its length fix the wire and once the cement is dry bend around the sprue to form a double layer. After that you can first cut out the wire in excess and then insert the sprue with the wire in the hole in the stabilizer. It should work, although I haven't got enough time to try this solution.

Thanks a lot guys. I think more modellers would like to read this so how about you send over a few photos showing what exactly you are talking about to make it easier for everybody to understand? Would make for an interesting separate posting, don't you think?

I had the same idea George. Just no time for pictures. I try and do my best before the weekend.
Yes, Danilo, I tried this exact method too. It works. However, fiddling with the tiny sprue and the wire is delicate, whereas when the sprue is already fixed to the stabilizer you have both hands free to insert the wire.

Doesn't have to be "right here, right now", let's do it when there is time. I'd also like to hear from others too because in 1/72 things become even harder. So if Jean or Radek or Zbyszek or Miro have any ideas, I would certainly like to hear from them.

Nice build and especially a good insceneration with your photography. It s a 9!