Account
Air patrol carried out at 3500 meters. Enemy sighted at 6000-5000 meters, bearing 040°. The 1st CHUTAI immediately approached enemy. The 2nd CHUTAI turned inside at high speed and, coming out in front of the last CHUTAI, engaged A's direct escort unit in a head-on approach and recovered below. The 1st CHUTAI deployed and made an overhead approach. 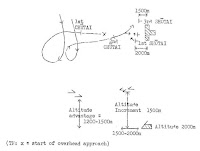 The cooperation of the 1st and 2nd CHUTAI was in general well timed.
The 2nd CHUTAI (diversion unit), after passing the direct escort unit in a head-on approach, made an overhead attack against the enemy attack planes. (The latter were judged to be too far away from the direct escort unit). A's 3rd SHOTAI delivered a head-one attack which was considered effective on the whole.
The 1st and 2nd SHOTAI of Force A made a head-one attack against B's diversion unit, pulled out, and then attempted to attack those planes of Force B which were trying to an over-head approach, but were unable to deliver a positive attack from a 600-800 meter firing range.
It was judged that B's attack unit did not consider this approach and could have made a run.

Comments
a. Since the number of planes on both sides was small during this trial, we can only imagine what would have happened with more planes participating. To conclude that Force A was able to check Force B skillfully with just 12 fighters is premature; greater participating strengths should be assumed in judging.

b. Since Force B was composed entirely of Zero fighters during the trial, it was more convenient to use them without distinguishing between a diversion unit and an attack unit; but further study on this matter is necessary.
1. The leading unit made the diversion unit, without its being considered a separate entity. The leading unit may proceed as usual and make a run, if it appears that an overhead attack is warranted by the condition of the direct escort unit, in which case the next SHOTAI will become the diversion unit. Or, the entire force, or a part of it, may make a surprise overhead attack.
2. Operating with two distinct units.
(It is assumed that local interceptors () will seek out enemy fighters but not engage them in combat).

c. The air patrol unit (JOKU SHOKAI TAI)
1. Patrol formations, maneuvers, disposition, and approaches.
Example: When the enemy bombers are well spread out, the unit making the overhead attack will approach and strike, also in spread-out formation.
2. The overhead approach.
When there are three enemy planes or less, there should be 300 meters distance between each BUNTAI attacking. If the enemy planes are about one CHUTAI strong, the attack is made by one SHOTAI at a time. The distance between the 1st and 2nd BUNTAI is approximately 100 meters with the 1st BUNTAI on the outside and the 2nd BUNTAI on the inside. The distance between SHOTAI will be about 300 meters, and the attack carried out as with BUNTAI alone.

d. In an attack by local interceptors against large planes, KO () fighters should go along as direct cover, to oppose interference by enemy direct escort planes which must certainly be expected.
Combat methods for this type of diversion unit and methods for its cooperation with the attack (local interceptor) unit remain open for investigation. 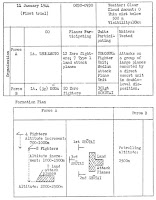 Account
Force A assumed assault formation () at 0840 immediately after making its rendezvous, but the medium attack plane unit then turned to the left. The 3rd SHOTAI (MASUDA SHOTAI), which was farthest in advance, did not observe this, lost sight of its companion units, and continued separately on its course. The 1st SHOTAI (TSUKAMOTO SHOTAI) and 2nd SHOTAI (OKI SHOTAI) also delayed in turning; and in the approach to the objective, the 2nd SHOTAI pulled too far to the side and lost sight of the medium attack plane unit. The 3rd SHOTAI, proceeding directly, sighted the "enemy" fighter unit (Force B's diversion unit) at 0850. When it turned to the left during its engagement with these fighters, it noticed the medium attack plane unit far behind and flew back in an attempt to reassume its escort station. The 1st SHOTAI, mistaking the 3rd SHOTAI for Force B, veered to the right.

At this point the KODA CHUTAI of Force B made its run on the medium attack plane unit. Although the 1st SHOTAI executed a head-on attack against the 2nd SHOTAI of Force B (OKUTANI SHOTAI), it was a little too late. In the meantime, the 3rd SHOTAI reengaged B's diversion unit to the right as the latter came in for a run, and hastened to its direct escort station. But it was too late; the medium attack plane unit had already been attacked.

Comments
1. Since the starting points were too close, and visibility was exceptionally good, it was difficult to simulate the attack approach of actual combat.
2. The direct escort units, as soon as they were in assault formation, carried out weaving together, 2000-2500 meters in front of the medium attack plane unit and at an altitude increment of 1000-1200 meters.
Though exercising their maneuverability in this manner, they should not lose sight of the medium attack plane unit. (This maneuver is admittedly difficult.)
3. Since the 3rd SHOTAI (MASUDA SHOTAI) became separated, a tryout of the double-level disposition () was impossible.
4. The cooperation between diversion and attack units, which became separated, was poor. The diversion unit should always protect the attack unit to permit the latter's making an effective overhead approach. (Further experiment is necessary on the position the diversion unit should maintain and on the timing of its run.)
5. Since the 2nd and 3rd SHOTAI of B's attack unit made their runs at almost the same time, a bracketing attack developed. Here the SHOTAI leaders should use proper judgement, to break off the attack, and maneuver for a second decisive approach, once their planes have reformed after a good break-away.
6. In patrol formation, it is important that each SHOTAI and each plane should not become separated too much. There have been times when the CHUTAI commander has decided to attack, but the chance to engage was lost, through the disrupted or unprepared attack formation of succeeding SHOTAI.

Account
Force A's medium attack plane unit set its course prematurely, so that the direct escort unit was unable to assume its proper assault formation. The 3rd SHOTAI (MATSUBA SHOTAI) was late in getting into its supporting position and fell behind.
Force B's diversion unit (2d, or MASUDA CHUTAI) sighted Force A at 1034 and approached the latter's direct escort unit (at 3600 meters). Force B's attack unit turned on sighting the enemy, but its formation became confused owing to the delay of the 2nd (OKI) and 3d (YAMAKAWA) SHOTAI in turning. Although the 2nd CHUTAI presented a satisfactory high cover screen (), the 1st and 2nd SHOTAI of Force A's direct escort unit avoided engagement with them and made an undeviating head-one attack against Force B's 1st CHUTAI.
In the meantime, the 2nd CHUTAI of Force B inflicted a head-on attack and an overhead attack on Force A's 1st and 2nd SHOTAI respectively. Force B's 1st CHUTAI was checked by the direct escort units; and because it rolled over too soon, its dive was too steep. But it immediately pulled out, looped, and attacked satisfactorily. The movement of Shotai 2 and 3 of Force B was held in check by the direct escort unit; they had to be contented ultimately with a weak attack.
The 2d BUNTAI of the 2d SHOTAI proceeded independently to the left, where the direct escort unit was thinly dispersed, and made a successful attack.

Comments
1. When the direct escort unit of Force A was attacked by the diversion unit of Force B, it should have counter attacked and then evaded, as in actual battle. It should not, however, get too involved in combat, lest it leave the medium attack planes exposed. In this encounter, its evasion was insufficient, and it was subjected to attack.
2. When unable to effect a steep overhead approach because of poor position, it is better not to go ahead with the attack, but to withdraw temporarily and plan a strike which will be sure not to fail.
The maneuver of the 2d BUNTAI (TAISHOYA BUNTAI) of the 2nd SHOTAI in Force B's 1st CHUTAI was well timed.
Greater stress should be placed these days on the attack formation of fighters on the timing of their attack.
(YAGI, Air Group Comdr.) 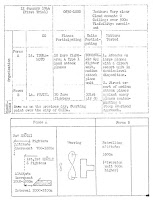 Account
The medium attack plane unit was delayed in its take-off; and while the direct escort unit waited at the rendezvous, the 2nd and 3rd SHOTAIs became separated and started out on the attack before they could regain formation. The 2nd SHOTAI (OKI CHUTAI) and the 3rd SHOTAI (Lt. (jg) MASUDA) pushed ahead under full throttle, fell back and slightly to the left.
Force B sighted the "enemy" too late, and having no time to deploy, made its run while still in patrol formation, bearing 330°  from the medium attack plane unit and with an altitude advantage of about 1200 meters. As a result, Force A's 3rd SHOTAI was able to deliver both a head-one and overhead attack against Force B.
The diversion unit of Force B was too late to check Force A's direct escort unit, which effectively attacked Force B's attack unit. The latter being also attacked in the center, fell behind.

Comments
1. Because of bad formation flying by Force A's 2nd and 3rd SHOTAI over CHIBA, they were not in their assault formation positions. At the time of B's run the 2nd SHOTAI had fallen behind and the 3rd SHOTAI was off to the left. SHOTAI leaders must understand precisely the positions to be taken for direct escort and see to it that the formation is constantly maintained.
2. Although the direct escort unit stays behind and above the medium attack plane unit when advancing for the attack, it is advisable that it occupy a superior position 500-700 meters above the designated altitude in order to facilitate its proceeding ahead of the attack planes before the enemy's run.
3. There must be a plan for rallying under the CO's plane after completion of an attack. (301st Air Group)
Posted by Arawasi