A video from the NHK collection dated March 1, 1944.
A number of aircraft types can be seen starting with at least two Mitsubishi Ki-51 "Sonia" and two Kawasaki Ki-48 "Lily".

And finally a Mitsubishi Ki-46-II "Dinah".

The tail markings of the aircraft indicate that they belong to the IJAAF school at Gifu.
The Gifu Army Flying School was organized in August 1940 at Kakamigahara, Gifu Prefecture. It was disbanded in March 1942. A year later, the Gifu Rikugun Koku Seibi Gakko (Army Air Maintenance School) was organized based at Kakamigahara with three kyoiku-tai (training units).
The tail marking of the unit is depicted below on a Tachikawa Ki-36 "Ida" by Zygmunt Szeremeta and was first published in our Eagle Eye #1. 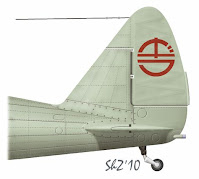 Below is a close up on the tail of the "Dinah" in the video. 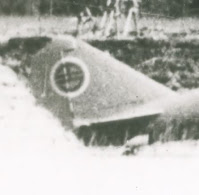 The time and the mention of "maintenance" in the naration indicates that the short clip was shot at Gifu Rikugun Koku Seibi Gakko.
Posted by Arawasi