Another video today featuring a beautiful Yokosuka D4Y3 Model 33 "Suisei" (Judy) found wrecked on the island of Kikaijima the airfield of which was often used as an emergency landing option for both IJAAF and IJNAF pilots during operations against Okinawa. 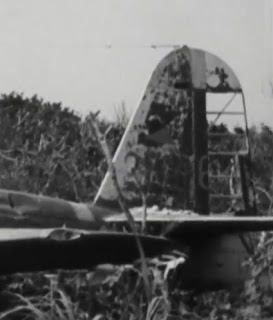 The still showing the starboard side is less clear, but since the tail marking were written from rear to front a number which is probably a "2" followed by the previously mentioned "6" can be discerned.
This would make the marking as "2X2-6X". 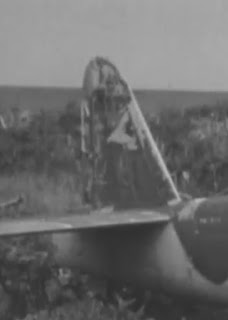 The 201Ku was organized in December 1942 as a fighter unit. During the battle of the Philippines in October 1944 the Kogeki 105 equipped with "Suisei" was only temporarily attached to the unit. According to Akimoto, the tail marking of 201Ku was a "01-". So, we can safely exclude this unit.

The 210Ku was organized in September 1944 as a trainer unit with a variety of aircraft types. and from December 1944 participated in the defence of the Kansai area, but from March 1945 they became a battle unit involved in the Okinawa operations and were based in south Kyushu. By the end of the mounth, though they returned to their original Meiji base, in Aichi prefecture. From May 5 became an exclusively fighter unit. Akimoto mentions that the unit marking was "210-". Although they briefly took part in the Okinawa ops, we can safely exclude this unit too.

The last and most possible unit is the 252Ku which was organized in September 1942 based on the Genzan Kokutai. In March 1945 the Kogeki 3 unit equipped with "Suisei" was attached to the unit, half of which relocated to Kyushu to provide escort for tokko missions. Akimoto mentions that the unit marking was "252-".
From the 252Ku a tokko unit was organized called "Dai 3 Mitate-tai" (can be translated as "protectors of the Emperor") equipped with Zero-sen and "Suisei" based in Kokubu, Kagoshima Prefecture, south Kyushu.
The "Suisei" of the unit flew on April 3rd (2 a/c), 6th (4 a/c), 11th (3 a/c) and 17th (4 a/c) attacking the enemy combined fleet in the Amamioshima area, except on the 6th when three "Suisei" attacked enemy forces in Okinawa's Naha.
So, from this information we can conclude that the unit that in all probability best fits the time and place is indeed the 252Ku. Perhaps the aircraft in the video had mechanical problems and made an emergency landing on Kikaijima where it was found by U.S. forces at the end of the war.
Posted by Arawasi