The last clip in this series features a Kawanishi N1K "Shiden" (George) found in pretty bad condition on Tokunoshima. As before US troops were no very comfortable with the aircraft sitting around with its cannons intact and I think they used thermite grenades to destroy them.

The full tail marking is not clearly visible to identify with absolute certainty the unit the fighter belonged to.
As in the previous post, in Martin Ferkl's Japanese WWII Aircraft In Colour (REVI publications) there is a color photo of the same aircraft. Unfortunately the location has been identified as "probably the Phlippines" and I believe that Martin deduced that the unit is the 762Ku.
A part of the tail marking on the starboard side is visible; "XX2-56". The "56" part can be confirmed as it is repeated on the port wheel cover and note that there is a hyphen after the "2". 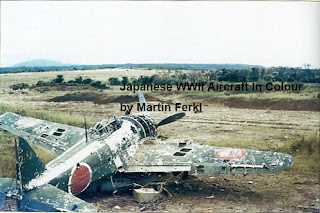 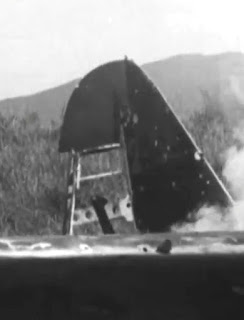 The tail marking on the more heavily damaged port side is more confusing. The numbers "54" are visible, but no "2" or any other number. AFAIK there is no 542Ku so the marking numbers present a problem. 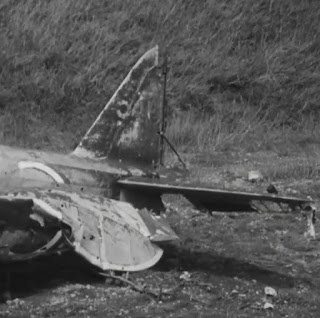 There is another explanation as to why we see the "54" on the port side of the tail. Perhaps it was the serial number which became visible when the paint and the unit marking were burned or destroyed in some other way. Kimura-san in his brilliant pamphlet that accompanied the old "Wingart" decal series, explains that "Shiden" manufactured at the Naruo factory, Hyogo Prefecture, (serial numbers 5251~5550) were delivered with the tail pattern below. 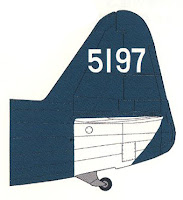 As a result, we concluded that we can only be sure about the yellow number "2-" as part of the tail number. The only unit we could find equipped with "Shiden" and a tail marking ending with a "2" is the 132Ku which was organized on February 5, 1945 in Tainan, Taiwan as a reconnaissance unit. On April 17 the unit relocated to Hsinchu, Taiwan to fly reconnaissance missions and to confirm the results of attacks against the U.S. Fleet during the Okinawa campaign. Akimoto mentions that the unit was equipped with Nakajima C6N "Saiun" (Myrt), Yokosuka D4Y "Suisei" (Judy) and..."Shiden".
There is also the possibility that the particular aircraft belonged to some unknown hikotai or kogekitai but highly unlikely an unknown kokutai.

And last but not least, HERE is the link to the whole video of the series, courtesy of the US National Archives, where you can also see "Shinyo" suicide motor boats and their base.
We hope you liked this series. More videos to follow. Stay tuned.
Posted by Arawasi

Amazing footage. I could keep them on the wheel all the time.
Good work George.