19 years ago (!!!) Keith Walker recommended a video in the comments section of a blog post and unfortunately it went overlooked. With the current overhaul I rediscovered it and I'm now presenting this fascinating video mix of various short clips featuring Kayaba Ka-Go and other IJAAF autogyros. Video source is HERE.
There are very very few books specifically on the Japanese autogyros. The classic is this one: 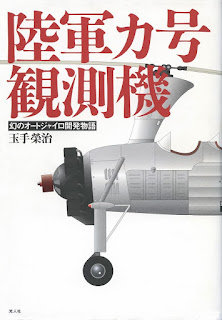 Title: "Rikugun Ka-Go Kansokuki" (Army Ka-Go Observation Plane)
Author: Tamate Eiji
Published by: Kojinsha 2002 h/b, in-print?
Pages: 356, Size: 20X14cm, Photos: 114 b/w, Illustrations: 19
A SUPERB book on the Kayaba Ka-Go. Fantastic photos, many never published anywhere else, detailed manufacturer's illustrations and a small section on the building of a model in 1/24. The best book on the type. Text is all in Japanese.
A few years ago, Dai Nippon Kaiga released this book: 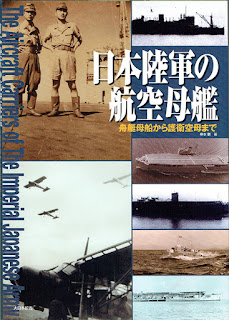 Title: "Nihon Rikugun no Koku Bokan" (The Aircraft Carriers of The Imperial Japanese Army)
Author: Okumoto Go
Published by: Dai Nippon Kaiga, 2011, p/b, in print
Pages: 128, Size: 30X21, Photos: 120, CG Illustrations: Watanabe Atsushi, Drawings: Okumoto Go
It's a nice publication but the focus is exactly on what the title says: IJA Carriers. Very few autogyro photos, none new, and about a dozen very nice Ki-76 photos which unfortunately are presented more as an afterthought than a subject of main interest. The all-in-Japanese text doesn't help at all either.
Below is our original 2011 post.

There are very few photos of this autogyro inspired by the Kellet KD-1A and built by Kayaba.
This one is the Kayaba Ka-go 2 with a Jakobs L-4 M A-7 air-cooled, seven-cylinder engine.
The story goes like this: the IJAAF imported a Kellet KD-1A from the States for evaluation. Unfortunately it was damaged during trials and the Army gave it to Kayaba to repair it. Kayaba installed a Jacobs engine and produced one more experimental test machine designated Ka-2. It was found to be very satisfactory and the Army decided to put it into mass production as the Ka-1 but with a different engine; an Argus As 10c eight-cylinder.
It served as artillery spotter and, according to a Japanese reference, with the 107 Sentai.
It also served in the anti-submarine role equipped with depth charges from the Army aircraft carrier Akitsu Maru. The first in the world to do so.
Those who have the Francillon volume will notice some differences with the text above.
Posted by Arawasi