Is it X-mas already?! I received this week a great box from Miroslav Kárník from "Rising Decals" with plenty of goodies. Thank you Mirek!!!
In the box there was a new decal set on the Nakajima Ki-49 "Donryu" (Helen), in 1/72, with markings for nine different camouflage schemes.
Here's the instruction sheet. 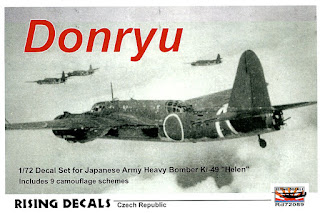 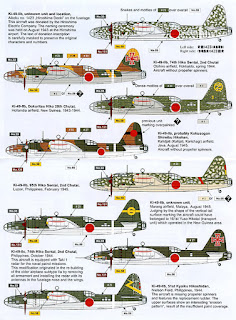 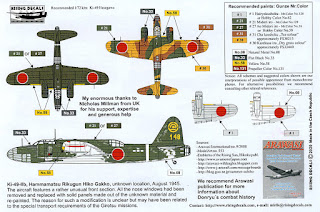 Of particular interest is the last "Donryu" with the Hamamatsu School marking.
There are two photos of this aircraft, from here. 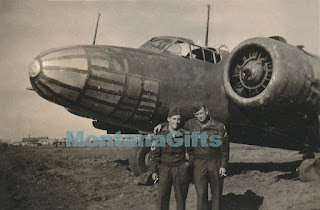 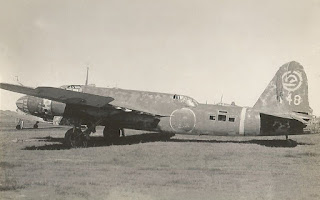 It's a mysterious aircraft but I think there are four possibilities:
1. suicide aircraft. If that's the case there would be oppenings for the contact rods like "Lily" had. Or the nose would be solid like on the "Hiryu" of the "Fugaku Tokubetsu Kogekitai" with no need to paint the nose windows. Also, most probably the rear gunner positions would had been faired over to save weight.
2. decoy. If it was a decoy, the wheels, the whole landing gear and the engines would have been removed to be used as spares for other aircraft. It doesn't add up to leave so many precious reusable parts on a decoy.
3. night or anti-submarine missions. Perhaps some short of radar was installed in the nose and needed to have all the metal in the nose replaced. The nose cover doesn't look to be very hard. Francillon mentions that some "Donryu" had a search light on the nose but there is no reason to remove completely the windows, replace them with something more solid and then repaint them.
4a. transport. This is a more probable suggestion but there would be no need to remove the nose windows and replace them with something solid then paint them again. "Donryu" as transports carried stuff in the fuselage, in the area from behind the pilot until (about) the tail. The nose gunner would be needed to protect the plane in such transport missions.
4b. transport for the "Giretsu" or other suicide paratroop mission. The "Giretsu" used specially modified aircraft for their mission, most of them from Hamamatsu. This is even more probable as the aircraft would need to carry as many troops as possible. Note that the dorsal cannon turret has added exterior metal protection to protect the gunner from shots fired from below, i.e. ground. Perhaps the nose was replaced with something that could be kicked out so that attack troops would be able to quickly get out from there.
For me, 4b is the most possible.
A LOT more about the "Giretsu" mission and their aircraft in our forthcoming "Sally" Eagle Eye!
Another "Donryu" in the sheet is enitled:
"Ki-49-IIb, unknown unit  Marang airfield, Malaya, August 1945."
And it is speculated as belonging to 161 Yuso Hikotai.

One of the most famous Japanese aviation artists, Kaiho Hideichi, has created the following piece featuring a Tachikawa Ki-54b "Hickory" with the same tail marking. 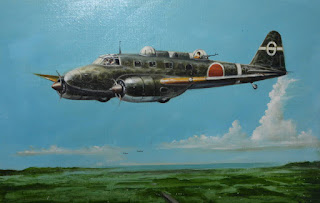 And he says that the unit is the "16 Kyoiku Hikotai". So, there you have it. Another totally unknown and unrecorded unit marking has been identified. I'll try to find more about the unit and will post here.
Yet another interesting "Donryu" in the decal set is this one.

It's a fairly well known aircraft, but unfortunately when high resolution images are not available, inaccuracies are inevitable.
The overall tail marking of the aircraft is far more interesting and complex, with a red "sakura" (cherry blossom) with a white center, painted under the "51 Kyoiku Hikoshidan" "kaminari" (thunderbolt) marking. 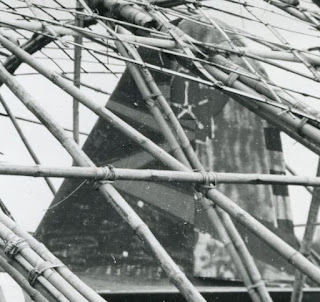 I have asked the late Akimoto Minoru-sensei for his thoughts and he was genuinely puzzled. He had seen the photos of this aircraft many times before but not in high resolution and had never noticed the "sakura". He also had no idea about the possible unit with the "sakura" marking.
ALSO, this month the blog is undergoing a massive overhaul. More than 1400 posts are too difficult to cotrol and some posts will be deleted, others will be corrected, merged and expanded. Those with dead video links will be reposted. There will also be many more "labels" to make it easier to find things.
So, stay tunned!
Posted by Arawasi

Greetings to all.
Couldn't the reason for painting a "frame" be a simple reason? I was looking at enlarged photos. And I wondered if it was just an anti-corrosion coating. It looks like welded sheets attached to the original frame. And this discoloration may have a reason in the cut protection. As we know, burnt metal releases carbon and is more prone to corrosion. Just a protective coating.
It's just my consideration. So please don't beat me. ;)

Any ETA on The Sally publication??

I understand you all excitedly wait for the new "Sally" EE. Will come out soon. I'm sure you do realise there are issues with worldwide shipping with the corona situation. There is little merrit in publishing the book and then being unable to send it to all of you

Honza78,
"protective coating" is an interesting suggestion but the windows are no longer transparent and obviously the gunner cannot see outside any more. I have never seen anything like this on any other Japanese bomber or any type of aircraft so I would say it was not standard maintenance or protection practice.

I agree with you on this. The only thing that is clear is the intention to cover the front. Indeed, it may be the preparation of an aircraft (possibly damaged) for Kamikaze units. We just didn't have time to finish the plan and we just have a big nut to think about. Finding the answer will probably be difficult.

Nice post and decals! Re: the 161 Yuso Hikotai/16 Kyoiku Hikotai Donryu at "Marang, Malaya", could it possibly be Malang in Java (Dutch East Indies/Indonesia) instead?

I'll need to check, but I don't think there was any airfield in Marang in Malaya/Malaysia.

Thanks. In case you didn't know, there is no "L" sound in the Japanese language so all the "Ls" become "Rs". Occasionaly they mix up everything like with the artist "Elic Crapton".
So, yes, it could be Malang in Java but I wasn't consulted about this particular aicraft in the decals so I don't know the source.