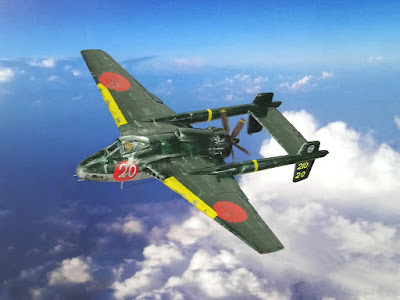 1:72 Yokosuka Naval Air Technical Arsenal J1Y3 “アカエイ” (Allied reporting name "Ron"); aircraft “210-20” of the 210th Kokutai, Imperial Japanese Navy Air Force (IJNAF); Kokubu airfield (Japan), April 1945 (What-if)
Some background:
The Yokosuka J1Y was a land-based interceptor for the IJNAF that was based upon a research aircraft and introduced into service during the final months of WWII. Work on the J1Y commenced at the Yokosuka Naval Air Technical Arsenal (海軍航空技術廠, Kaigun Kōkū Gijutsu-shō) during 1942 and 1943, in the midst of the Second World War. The J1Y was initially intended to test the benefits of different aircraft layouts to exploit the available engines’ potential further, albeit the aircraft had been designed from the start in a fashion that was suitable for combat and easily adaptable into a light fighter aircraft. It would eventually be developed into Yokusuka’s only fighter project.
The J1Y was an unorthodox twin-boom pusher configuration fighter aircraft. It featured a mid-mounted wing, a tricycle landing gear arrangement, and was furnished with heavy forward-firing armament. The fuselage was primarily composed of plywood for the forward section and aluminum throughout the aft section, in order to save critical war material. The advantages of the pusher design were of an unobstructed forward view for the pilot, while the armament could also be concentrated in the nose, so that most of the aircraft’s heavy elements were concentrated around the mutual center of gravity. However, a major drawback was difficulty in escaping from the aircraft in an emergency, as the pilot could get drawn into the propeller blades, and the tail surfaces posed an imminent danger, too.
The J1Y1 test aircraft was powered by a 700 kW (940 hp) Nakajima Sakae 12 engine. A pair of intakes in the wings’ roots ducted cooling air to the engine, which was mounted at the egg-shaped fuselage’s tail, as well as to a pair of oil coolers that were buried in the thickened wing roots. Despite the aircraft’s tubby shape, it was a very clean design with an excellent weight distribution.
During the ensuing tests and flight trials in late 1943, the J1Y1 proved to be superior to the comparable Mitsubishi A6M2 “Zero” in many respects, so that the Imperial Japanese Navy Aviation Bureau (海軍航空本部, Kaigun Kōkū Hombu) became interested enough to eventually order a fully capable combat aircraft variant in early 1944: the J1Y2. 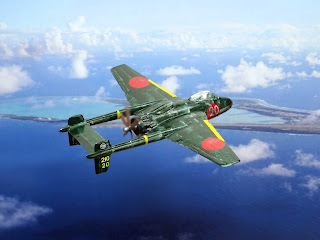 Development of the J1Y2 lasted until mid-1944. Outwardly, the aircraft differed only slightly from the J1Y1 test aircraft, of which four had been built. The internal structure was strengthened, especially around the engine mount, because the fighter version was to be powered by the Mitsubishi Kinsei Model 48 radial engine which delivered 1,080 hp (810 kW). Since this engine had a slightly bigger diameter, the tight cowling had to be modified and now featured small bulges for its fourteen-cylinder heads, creating a characteristic ring of small bumps around the rear fuselage. The dorsal carburetor air scoop had to be enlarged, too.
The J1Y1’s four-blade propeller was replaced by a six-blade propeller – a measure that was necessary to convert the engine’s raised power output into sufficient propulsion, while exploiting the limited possible propeller disc diameter between the tail booms and keeping sufficient ground clearance.
Armor plates were added to the nose section and behind the pilot’s seat, but protection remained relatively light. In order to extend the J1Y1’s limited range of only 750 km (470 mi, 400 nmi), two additional 150l fuel tanks were added to the inner wings behind the landing gear wells, partly extending into the tail booms, even though they were not self-sealing like the main fuel tank behind the cockpit. Tilting air brakes were installed on the wings, enabling the J1Y1 to maneuver quickly into a stable firing position behind slower aircraft. Armament consisted of a pair of 20 mm Type 99-2 cannon, flanking the front wheel well, supplemented by a pair of 7.7 mm (.303 in) Type 97 machine guns, which were rather intended as spotting rifles: they fired tracer rounds with the same trajectory as the 20 mm rounds, and gave off a flash and puff of white smoke on impact, so that 20 mm ammunition could be saved. Upon IJN introduction in August 1944, the J1Y was christened “Akaei” (アカエイ, “Stingray”). The Allied reporting name was "Ron". 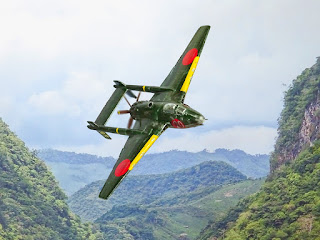 However, teething development problems stemming from the Kasei engine cooling system and the main undercarriage members led to a slowdown in production. And when the Boeing B-29 Superfortress appeared, the J1Y2’s performance, esp. at height, was not sufficient anymore. Being not suited for high-altitude operations, and lacking internal space to accommodate a turbocharger, the IJN’s interest in the aircraft waned and resources were rather allocated to more promising types like the Mitsubishi J2M, despite its development problems, too. However, the J1Y2’s heavy gun armament supplied effective firepower and the use of dive and zoom tactics allowed it to score occasionally. It was also a very agile aircraft, esp. at medium altitude, so that production switched in January 1945, after 75 J1Y2s had been built, to the J1Y3.
The ultimate variant of the “Akaei” featured a new, even more powerful Mitsubishi Kinsei 62 engine with 1,163 kW (1,560 hp). Outwardly, this variant differed from its predecessor by a different exhaust arrangement: instead of the J1Y2’s two exhaust pipes, the J1Y3 featured individual exhaust, hidden under seven aerodynamic fairings, in order to exploit residual thrust and therefore further improve performance – resulting in even more bumps and fairings around the engine cowling. For the more powerful engine and also because of cooling problems, the carburetor scoop was enlarged even more, so that an auxiliary cooling intake could be integrated.
Even though the armament nominally remained unchanged, supply shortages and field modifications in order to lighten the aircraft saw many J1Y3s with only two Type 99 cannons installed and the empty machine gun ports faired over. Some J1Y3s also carried gun 13.2 mm (.51 in) Type 3 heavy machine guns instead of the cannons, becoming designated J1Y3a. Due to ammunition shortages, some machines were converted in field workshops to this standard, too.
The J1Y3 arrived at IJN units in March 1945, but only a few were operational until the end of hostilities in the PTO, probably only around 40 aircraft were eventually delivered. 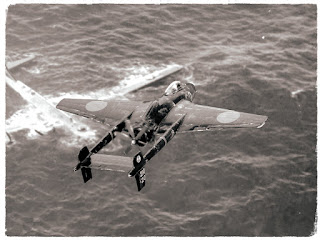 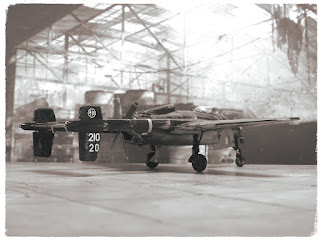 The kit and its assembly:
This build was a contribution to the “In the navy” group build at whatifmodellers.com in early 2020. The Vampire kit is the vintage Heller mold from 1979, in a mid-Nineties Revell re-boxing. Like many other Heller kits it comes with raised panels, but detail is sufficient (nice dashboard, landing gear is O.K., and the kit comes with separate air brakes).
At the conversion’s core was the implantation of a radial engine in place of the jet exhaust. I found a donor part from a Hobby Boss MC.200 Saetta – a bit vintage, but it had the right diameter and I actually liked the ring of bulges on the cowling. Internally, a styrene tube adapter was added for a freely spinning propeller.
While adding a prop to a jet seems to be an easy task, the real challenge behind such a conversion are the many other changes that have to be made to the airframe. This includes a (considerably) longer landing gear and the respective wells, but also the tail surfaces. There’s also the question how the new radial engine actually breathes, where exhausts can be located, and a cooling system is necessary, too.
Work started with the search for new landing gear struts, and I also used different wheels – for instance, the main wheels come from a Hasegawa F9F Panther, while the front wheel comes from a Frog He 162. In order to make the longer struts fit into the airframe I elongated the wells in the wings towards the fuselage, so that the track width was reduced – but with the Vampire’s original wide stance no serious problem. From the inside, they were faired with styrene profile material, and the extended covers were scratched – esp. the parts for the wings, with their bulges for the tail boom tips, were fiddly.
In order to move the overall look a bit further away from the Vampire, I completely changed the fin arrangement. The original, rounded and rather small fins with their bullet-shaped fairings that hold the stabilizer outside of the original exhaust blast were deleted. Once the wings and the tail booms were added to the fuselage, the stabilizer was mounted between the booms, in a slightly lower position. For the new fins I wanted a layout that would, beyond a more squarish shape that would better match the wings, protect the propeller. These became stabilizers from a KP Yak-23; each was cut into two pieces, tailored to match the rest of the aircraft and glued in positions above and underneath the booms. Looks quite weird, as if the aircraft had been designed upside down, but it’s a pragmatic solution.
The six-blade propeller was scratched; the spinner was carved from a thick piece of sprue, plus a metal axis, and six single blades that were taken from the rather wacky pair of one-piece propellers of Airfix’ Ki-46 kit.
Hollow steel needles were used as barrels for the Type 99 cannons in the lower fuselage. 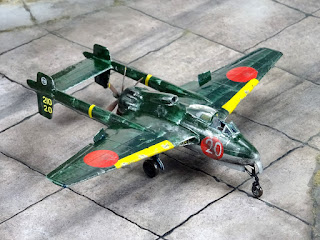 Painting and markings:
A rather conservative approach a typical IJN dark green over light grey scheme, with minimal individual markings or tactical codes. I wanted to stay true to this concept but decided to simplify the scheme even more since this would be a late-war aircraft, pressed into service under rather dire supply circumstances. This resulted in a NMF livery (basis Tamiya XF-60, plus some Polished Aluminum Metallizer from Humbrol on top), with only the upper surfaces camouflaged with IJN Green (ModelMaster) without primer underneath, resulting in a somewhat flaky and worn look.
The yellow ID markings on the wings’ leading edges were created with decal material (TL Modellbau), the cockpit interior as well as the landing gear wells were painted with a mix of silver and blue, mimicking “aodake iro” protective clear lacquer. The struts were painted black, according to A6M museum exhibits. The propeller blades ware painted in a red-brown primer, a mix of Humbrol 160 and 180.
Markings were taken from a PrintScale Yokosuka N1K2 decal sheet and mixed from two aircraft. Placing the fuselage hinomaru was tricky – the natural choice would have been the tail booms, but they’d be very small, so I rather put them on the fuselage under the cockpit. With the individual aircraft number added to the meatball, it looks now like a racing aircraft, though...
Finally, the kit received some soot stains and dry-brushing with aluminum, and everything was sealed with semi-gloss acrylic varnish from Italeri - even though the result is a little too glossy for my taste, but I left it that way.
- Dizzyfugu - 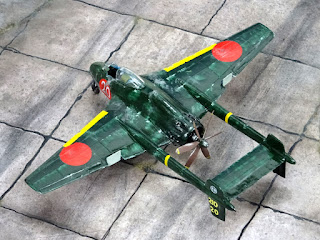 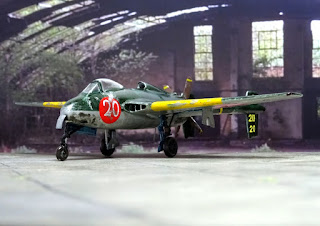 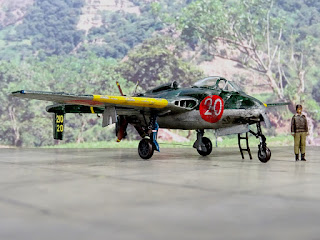 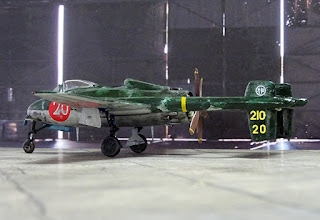 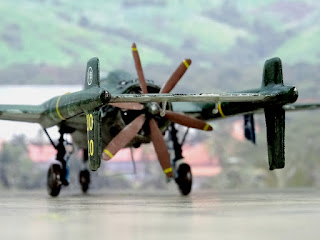 Very creative story and excellent photography! I nearly believed the history, except for the Vampire nose - deHavilland must have had a spy at Yokosuka...

Very nice and the photos are very imaginative and well done !