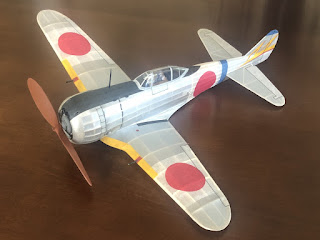 I wanted to share some photos of my "Shoki", which will be making its first contest debut later this month. The model was built from a heavily edited Diels engineering laser-cut kit. The "Shoki" is a very challenging Free flight subject, due to its very short nose and small wing. The short nose means that achieving the necessary balance point will mean adding a fair amount of dead-weight ballast to the nose. And then the small wing area means there are fewer square inches of lifting area to carry the all-up weight of the ship and ballast with its rubber motor. I’ve changed the construction from using 1/16” square stock to smaller 1/20” square stock for the fuselage stringers, and stabilizer and fin/ rudder construction. And the dihedral and stabilizer’s area have both been increased in order to improve lateral and pitch stability.
To my mind, the "Shoki" appears more like an air racer rather than a dog fighter. It is essentially a big radial engine attached to a small airframe with a comparatively small wing. In my opinion, it “looks fast” and that fin and rudder extending well past the stabilizer only adds to the effect. And from what I’ve read, it was employed in combat in the manner of a fast, swooping and diving attacking  airplane.
The ship is covered with Esaki Japanese tissue, and the translucent silver color was sprayed on with multiple, highly thinned coats of nitrate dope with some silver enamel added. All of the markings are cut from colored tissue or hand painted.
I have not created a spinner for this bird as yet. That will be completed once I find the correct propeller diameter and pitch that gives the best flights. So the prop is a bit provisional until I get the flight qualities dialed in.
- Doug Beardsworth - 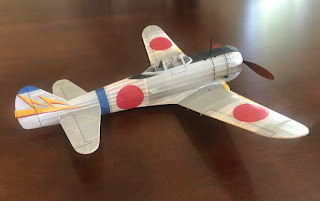 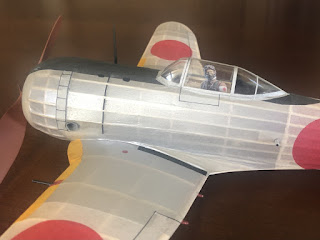 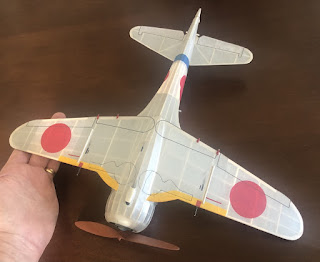 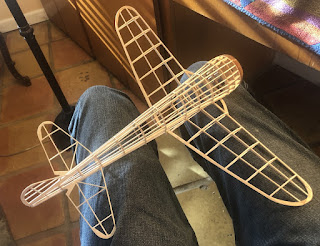 This is an unusual and very exceptional model. It looks all like a Shoki despite the changes, particularly the colour and markings came out great. I hope it's going to fly.

Beautiful work. It's unbelievable how it resembles a model. A pleasure to watch.

Thanks gents! I have made some test glides in the yard, with a freewheeling prop, and an unwound motor . That simulates the glide portion of the flight after the rubber motor runs out its winds at altitude. the ship is stable and ready for powered flight.
Hopefully A few thrustline adjustments as I wind it up and I’ll be ready to rock. I’ll report back after the contest.

Thanks gents!
Unpowered Test glides with a windmilling prop all look good.
Next, I’ll be winding it up and adjusting the motor section and prop size to hopefully get it “dialed in”
I’ll report back after the upcoming contest.
Doug B

Wishing you many successful fights and hours of enjoyment :)