Two weekends ago, the Teikyo University in Utsunomiya organized a matsuri (festival) and the hangar of its Aerospace Department featured some interesting exhibits.
First up, Kojima-san had abrough the propeller of a Nakajima Type 5 Trainer, which most probably belonged to the J-TIBE of the Ito Hikoki Kenkyujo, flown by Fujiwara Nobu.

On top was a model built by Kojima-san of another Nakajima Type 5 with the civilian registration J-TOBF. 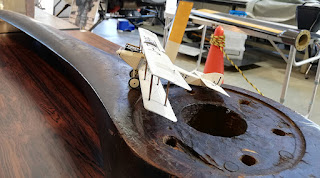 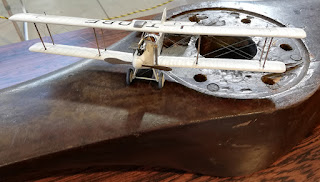 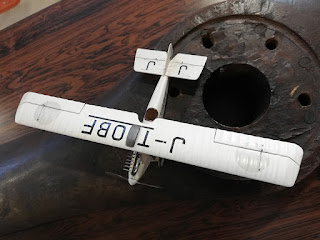 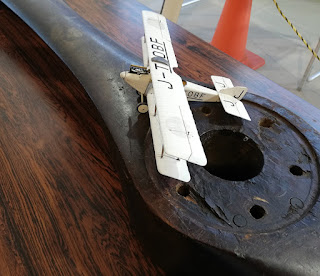 The particular aircraft was the first in the fleet of Asahi Shimbun, receiving the name "Asahi 1 go" and was purchased from the IJAAF. It had the Nakajima serial number 97 and a Hall-Scott 150hp engine.
It belonged to "Tozai Teiki Kokuki" and was based on Tokyo's Susaki airfield (see HERE).
It first flew with its civilian designation, J-TOBF, on January 9, 1923.
In 1923 Asahi Shimbun in cooperation with Shirato and Ito Hikoki, established the "Tozai Teiki Kokuki" to fly weekly mail services between Tokyo and Osaka. Actually, since there were no aircraft available at the time to fly the distance, one aircraft would take off from Osaka's Joto parade grounds, another from Tokyo's Susaki airfield, and they would meet at Mikatagahara airfield in Hamamatsu, Shizuoka Prefecture, where they would exchange their mail bags.
There were six Nakajima Model 5 purchased from the IJAAF and one aircraft each from Shirato and Ito. The latter civilian schools provided ten pilots.
The first flight was on January 11, 1923, and the whole endeavour lasted for only three months.
J-TOBF was destroyed during the "Great Kando Earthquake" of September 1923, when the Susaki airfield was ravaged by a tsunami and the facilities caught fire.
As you have probably noticed, Kojima-san chose to depict the aircraft with what looks like white circles on the wing top surfaces. Below is a close up of J-TOBF and the white circles are easily visible. Note that the civilian registration is clearly in black. In some photos the hinomaru don't look dark at all, more like white, either due to the film quality or the angle the photo was taken causing the hinomaru to sign. In the J-TOBF case it is very probable that they were overpainted so that the aircraft resembled more a civilian one than a military. Asahi Shimbun aircraft had the newspaper logo painted on the top and bottom surfaces of the wings, so perhaps this was a preliminary effort before the Asahi logo was applied.

The Nakajima Type 5 Trainer was based on the U.S. Standard H-3 and the German Albatros C II. 101 were built from 1919 to 1921 and had numerous problems until they were replaced by other types.
In the photo below is a Nakajima Type 5, s/n 15. 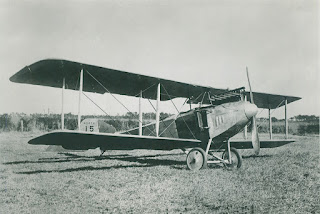 Another contribution to the exhbition was by Taiki-san who brought a Ho-103 machine gun together with its box.

On another table there was a nice collection of Japanese aircraft models, mainly Pearl Harbor themed. 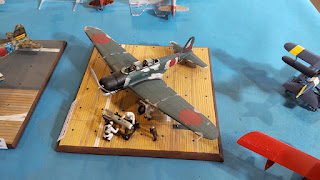 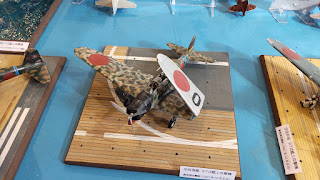 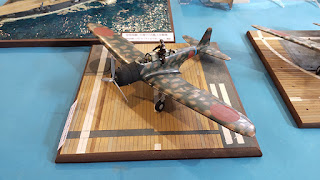 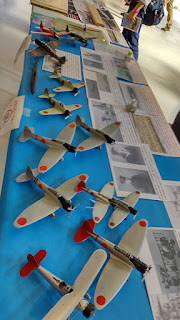 There were a couple surprises too, including a scratch built Kyushu K11W "Shiragiku" and a 5-shiki-sen on a top of an original front windshield of a Ki-100; all by Kojima-san. 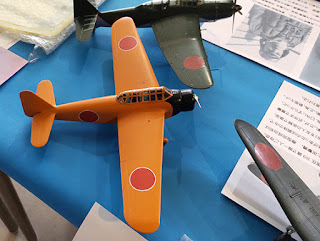 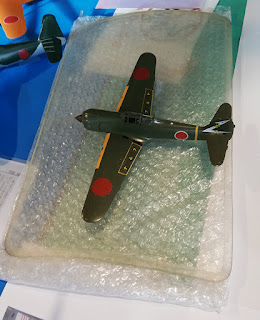