The video continues with US personnel inspecting three Mitsubishi Ki-21 "Sally" bombers, all belonging to the 25 Hikodan Shireibu Hikohan. The rather obscure unit relocated to Clark Field on October 20, 1944, and took part in the Leyte campaign.
The first badly damaged bomber is a quite old Ki-21 Model 1 Ko, without a tail gun. It has been camouflaged with green paint over the original hairyokushoku and seems to sport a red and white band on the fuselage, behind the hinomaru with a white surround. The tail marking is in red with a white surround and, typical for all the aircraft of the unit, there would be a hiragana under it indicating the individual aircraft. 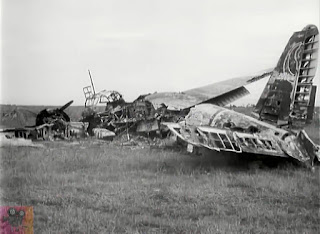 The second "Sally" is a Model 1 Otsu with a tail gun. The aircraft had a previous owner as indicated by the red angled band on the tail and the most unusual fuselage hinomaru crudely over-painted with white paint. The angled band is a tail marking usually associated with the 61st Sentai during its assignment to Nomonhan in 1939. A very old aircraft indeed.
Typical of all pre-Pacific War "Sallys", the bomber is finished in overall hairyokushoku without any camouflage. In our Eagle Eye publication, you can see "Sallys" of the unit with and without camouflage prior to their assignment to the Philippines. So, the uncamouflaged bit shouldn't come as a surprise. On the other hand, the wing top surfaces seem to have zebra bands in green. Perhaps the aircraft was destroyed before it received proper camouflage?
Finally, note the two white bands on the fuselage in front of the tail. While the closer to the tail looks natural, the second seems to fall on the hinomaru with the white surround. Perhaps a remnant of the previous unit.
An overall VERY unusual and puzzling aircraft. 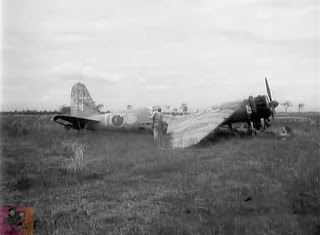 A close-up of the Nakajima Ha-5 engine of the above aircraft. 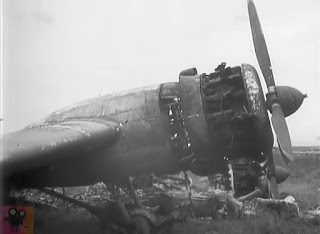 A close-up of the tail. 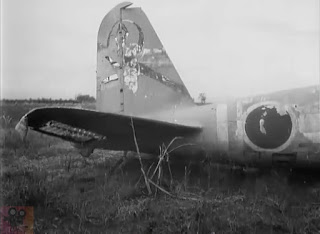 The third "Sally in the video is also a Model 1 Otsu, uncamouflaged, finished in overall hairyokushoku. 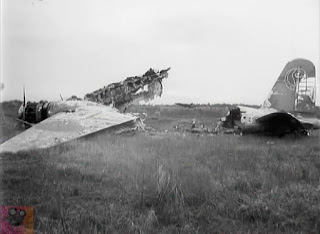 Arawasi was the first to identify in print the unit marking on issue #11 of our magazine, and more about the unit can be found in our latest Eagle Eye #3, HERE.
Posted by Arawasi