2nd build of 2022! Been working on and off on both the Tomcat and Hayate. Started the Hayate as I needed to rest my eyes from working with TPS colors for the past year and a half and it has also been 2 years since I last finished a prop. This one's Arma Hobby's awesome Ki-84 in 1/72nd scale. Markings of choice are from the 1st Hiko-Sentai based in the Philippines. Many thanks to Tony Feredo and George from Arawasi for their input regarding the actual aircraft and unit.
The fit of the kit was great! Only issue I had was with the fit of cockpit's upper half which had small steps on the sides of the fuselage. I also found the cowling of the kit to be fiddly to assemble, it was tricky getting everything in there to line up nicely. Other than that, it was a quick, hassle-free build. Engineering was great around many areas like the landing gear, gear doors, fuselage, etc. Though, I could use some more PE in the cockpit besides a pair of seatbelts.
The markings I opted for were featured on the first page of Model Art 493 which I purchased from Arawasi. These were from the 1st Hiko-Sentai, which saw action over the Philippines. For the paint, I used AK Real Color Olive Brown No.7 and Mr. Color 128 IJA Grey Green. The stripes were painted using Tamiya LP Insignia White and Flat Red. Weathering was done with oil paints. Chipping was done with a mix of dry brushing (for the back of the props), brush and a torn-up sponge. I used Hiro Acrylics Silver for the chipped effects along the wing roots and high traffic areas like the sides of the fuselage, access panels and other hatches.
- Enzo Acorda - 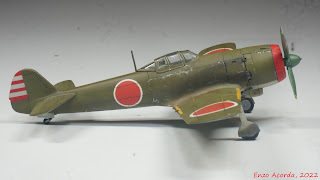 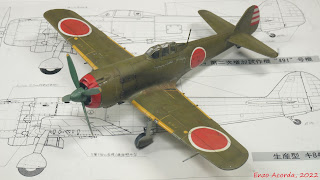 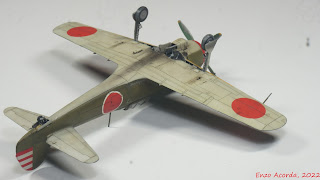 Yes, beautiful model! I can also confirm this kit from Arma is a great one since I am building one in these days. I didn't put together the cowling bits yet but have noticed the fit fuselage/wings is so perfect I decided to paint them separately and couple them afterwards.