From the very beginning of the Second Sino-Japanese War in 1937, the Japanese media were interested to cover the hostilities especially in the bigger cities like Shanghai. By 1938 with the war expanding to the Chinese interior, groups of journalists and writers but also painters and musicians visited the front under the auspices, separately as always, of the Japanese Army and Navy. The groups of writers were nicknamed "Pen Butai" (Pen Units) while the musician groups were called "Record Butai". In August 1938 two such groups consisting of 24 writers for the Army and eight for the Navy visited the front where the Battle for the city of Wuhan was at full force (here).
On September 14, 1938 a Navy "Pen Butai" of seven members took-off from Haneda/Tokyo and landed in Shanghai. The previous day a 7-member Army "Pen Butai" had started from Fukuoka in North Kyushu and landed in Shanghai as the photo below from a vintage publication testifies. The mission of both groups was to cover the Battle of Wuhan. 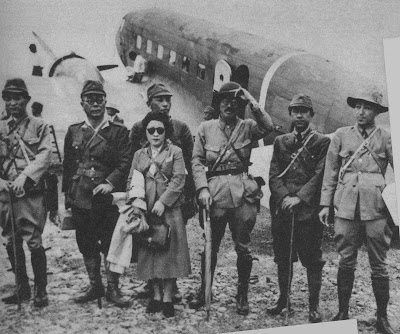 The most famous member of the Army "Pen Butai" was writer Kume Masao (here), standing third from right with the moustache.
First from left is novelist Kataoka Tepei. In 1932 he was imprisoned for his "leftist inclinations" and while in prison he made a turn to more "popular" literature.
Second from left is poet Sato Sonosuke while next to him is poet Asano Akira. Asano became a member of the Japanese Communist party in 1926. He was arrested during the "March 15 incident" (here) and was imprisoned for one year. After his release he changed to more traditional and cultural poems. It is said that Mishima Yukio read Asano's poem "Ten to Umi" (Heaven and Sea) before taking his own life.
Second from right is novelist Kawaguchi Matsutaro (here) and next to him is writer and mountaineer Fukuda Kyuya (here).
Standing alone in the middle is author Hayashi Fumiko (here) who led a quite adventurous and most interesting life. She often visited the front and from October 1942 to May 1943 she sent reports from French Indochina, Singapore, Java and Borneo.
The star of the Navy group (not in the photo) was Kikuchi Kan (here), one of the most famous Japanese authors.

The various "Pen Butai" were the precursors of the "Nihon Bungaku Hokoku Kai" (Japanese Patriotic Association of Literature) which was particularly active with propaganda during the Pacific War.
Note the Douglas DC in the background especially the very hastily applied camouflage.
Posted by Arawasi

Interesting that these are "literary" people; rather than newspaper reporters.
Do we know to what extent their writings after such a trip were "reviewed" or otherwise censored by the authorities?

Ofcourse there was strict censorship. The various "Pen Butai" were actually sent by "Naikaku Jyoho-bu" (Cabinet Information Department/Office. Later re-named "Jyoho Kyoku" Information Bureau") which was the equivalent of the FBI. They chose who would be a "Pen Butai" member and reviewed all the work they created.
Check this most interesting book for more, especially p.80-81:
http://www.amazon.com/The-Thought-War-Barrack-Kushner/dp/0824832086/ref=sr_1_1?ie=UTF8&qid=1345349749&sr=8-1&keywords=The+thought+War+Barak