"Aikoku-ki" (Patriotism-planes) were called the Army aircraft that were donated to the IJAAF with funds from worker associations, schoolchildren and their parents, citizens of cities or prefectures and many other kind of groups.
﻿
Obuse Shinzaburo the 2nd, was a rich Japanese born in Yokohama that inherited and continued his father's foreign exchange and stock market business. On September 2, 1937 during a ceremony held in Tokyo's Haneda airport he donated to the Army no less than six aircraft; four Type 95 Fighters or Kawasaki Ki-10, Aikoku #137-140 and two Type 94 Reconnaissance Aircraft or Nakajima Ki-4, Aikoku #141&142 which were named after the donor. In the photo below Obuse is standing next to Aikoku #141, a Ki-4 offering an excellent view of the rear twin Type 89 flexible machine gun mount. 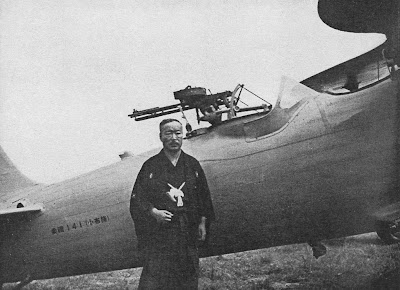 In the photo below, Field Marshal Sugiyama Hajime, War Minister at the time, is offering a certificate or receipt to Obuse-san who not only donated aircraft to the Army but also to the Navy and for this received the nickname "King of Aikoku airplanes". 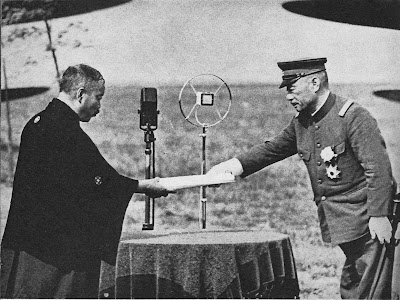