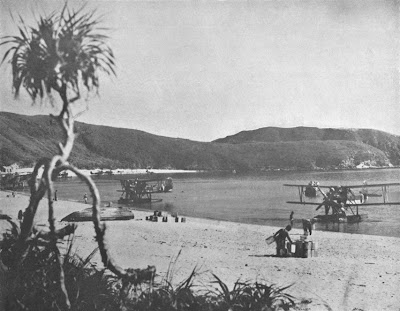 From the beginning of the Second Sino-Japanese War, in order to cut China's access to supplies from other countries, the Japanese Armed Forces executed a number of operations to occupy the major Chinese sea ports.
On October 12, 1938 about 100 ships landed the 21st Army commanded by LtGen Furusho Motoo which included the 5th, the 18th and the 104th Divisions. The IJN fleet was commanded by Admiral Shiozawa Koichi and included ships like the cruiser Myoko the light cruisers Kinu, Jintsu, Tama and Nagara as well as the Army Landing Craft Depot Ship Shinshu Maru.
Ample air support was provided by the carriers Kaga, Soryu and Ryujo accompanied by the seaplane tenders Chitose and Kamikawa Maru.
The landing took place unopposed in the notorious for the pirate activity at the time Bias (Daya) Bay. The photo above from a vintage publication features two Kawanishi E7K1 "Alf" in the foreground. The tail marking is unfortunately not clearly visible although it could start with a "C".
In the photo below are LtGen Furusho on the left with Admiral Shiozawa. 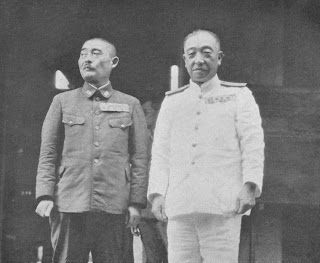 Even before the actual date of the landing, Prince Chichibu travelled with the fleet that left Nagasaki and in the photo below he is standing on the left on the rear deck of what I believe is the cruiser Nagara. 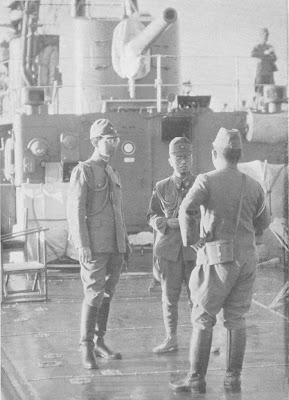 Two days after the landing Prince Chichibu went ashore on Bias Bay to inspect the troops and the progress they had done. Note in the photo below the Nakajima E8N "Dave" floatplanes. 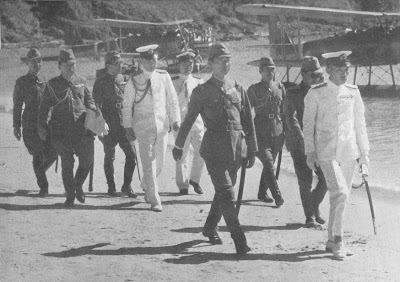 Very cool! This sort of information is always welcome, it helps in understanding Japan's position right before WW2.
Thanks!