More "Shiragiku" photos today, this time stills from a vintage news clip.
The two aircraft featured in the stills belong to Kugisho (short for Koku Gijutsu-sho, Aviation Technical Arsenal). The tail marking consists of the katakana コ (KO) which was the standard marking for the Kugisho, the first two digits of the Short Designation in this case K11 and the plane's individual number; コ-K11-1 & probably コ-K11-4.
The original order by the IJNAF to develop the 15shi Rikujo Kijo Sagyo Renshuki (literally "Land-based trainer where work could be done on board" or Crew Trainer) was given in June 1941 and the first prototype was completed in November 1942. From January 1943 a number of pre-production planes were delivered for evaluation, two of which are featured in the stills.
Mass production of the type which received the short designation K11W1 followed but in June 1943 an order was given to modify the type by increasing the number of students on board from three to four and the number of radio sets from one to two. The remodelled type known as "Shiragiku kai" or K11W2 was officially adopted in January 1944.
With "Shiragiku" students could do navigation, radio communication, reconnaissance, shooting and bombing training but in general communication between the pilot who was sitting one step higher than the rest of the crew was not very good and the previous Type 90 Crew Trainer or Mitsubishi K3M "Pine" was much more liked by the crews.
Kyushu delivered four aircraft in 1942 and 209 the next year and "Encyclopedia Vol. 8" mentions overall nine prototypes without explaining how many were the actual prototypes and how many the pre-production planes. In other words, the total number of pre-production aircraft is not known.
Overall colour is trainer/test orange. The hole between the cockpit and the tail is the machine gun position for shooting practice. 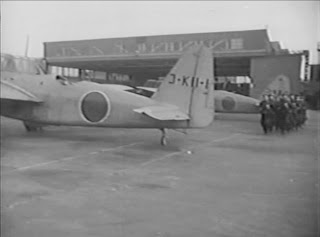 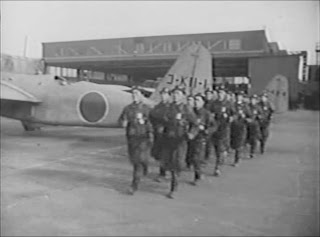