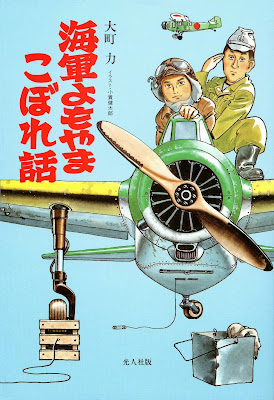 Oomachi-san was born in 1923 in Tokyo. He joined the Marines in December 1943 and was trained in the Ainoura base, Sasebo. From February 1944 he joined the Mie Kokutai for basic training then in June 1944 to Suzuka Ku for reconnaissance. From April 1945 he was with the Shimizu Ku then from May with Opama Ku and finally with Oi Ku from June 1945 until the end of the war.
His memoirs recall his time with the IJNAF as well as including a record of various conversations with other IJNAF members. A very interesting book featuring brilliant illustrations by Onuki Kentaro.

Oomachi-san describes his "Shiragiku" training when he was assigned to Suzuka Ku. On a training day a group of three students would get on a "Shiragiku" accompanied by an instructor, plus the pilot flying the plane. While in the air they would perform various tasks taking turns. There were two ways to take photos in flight with a hand-held camera. One way was through the special hole on the floor for the bombsight which was usually the Type 90 Bombsight, based on the Goertz-Boykow model; known as "boiko" in the IJNAF lingo. The second way was particularly scary. Holding a heavy camera one crew member was leaning outside the fuselage side window while another crew member was holding him from behind.
Onuki-san's illustration is certainly spot-on! 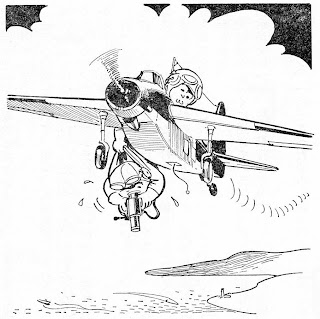 In-flight training also included shooting practise with the rear flexible machine gun. In this case two "Shiragiku" flew side by side with fukinagashi (tubular streamers) trailing behind them. Students would take turns trying to shoot the streamer of the other "Shiragiku" and since bullets were died with a certain colour assigned to a certain student, in the end it was possible to figure out how many hits each student managed to score. In Oomachi-san's case not even one student managed to hit the target even in such favourable conditions.
Another kind of training was a combination of the above mentioned two; taking photos using a Type 89 hand-held gun camera. For this the services of a "Zero" were required. The fighter pilot would perform all kinds of manoeuvres with the students trying to catch him and take a photo of his plane. Before take-off the Zero pilot had warned the students in Oomachi-san's group "I would be particularly embarrassed if you manage to take my photo" and that was exactly what happened; there were no Zeros in all the photos the students took with the gun camera. 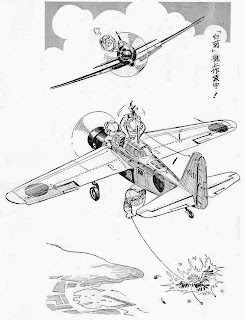 Bombing practise was similarly done, using coloured training bombs assigned to each student who were trying to hit a raft target trailing behind a manoeuvring ship most often without any success.
Posted by Arawasi


Interesting topic with very nice artwork in that book.
I like that a lot.

Thank you guys. Glad you liked it.