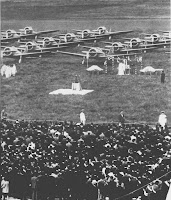 No less than 51 newly delivered Army and Navy aircraft were presented to the public at Haneda airport on September 20, 1941, the second Aviation Day. 16 of them became IJNAF Hokoku-go and 35 became IJAAF Aikoku-go. The ceremony started at 13:00 and was attended by the Navy Minister Admiral Oikawa Koshiro and the Army Minister (at the time) Tojo Hideki as well as a huge crowd who, according to the video commentator, enjoyed low passes, formation flights and skillful acrobatics by the pilots who were elated to receive their brand new aircraft.
The photo above is from a vintage publication and the video below from the NHK collection.
Posted by Arawasi

Thank you. I do enjoy these film clips. Keep looking.
Who knows, maybe some day you will find a color one.