A beautiful clip from the NHK collection today dated November 29, 1943. Unfortunately there is no narration.
In the photo below, most probably in Rabaul, the ship in the background is either the cruiser Sendai or more probably the cruiser Naka, both of the same class, both based in Rabaul in November 1943. Sendai was sunk on November 2 during the Battle of Empress Augusta Bay
Naka according to Wiki:
On 21 October 1943, Naka and Isuzu embarked Army troops at Shanghai. The convoy was intercepted by the submarine USS Shad in the East China Sea on 23 October 1943, which fired 10 torpedoes, failing to damage either cruiser. On 3 November 1943, convoy was attacked 60 nautical miles (111 km) north of Kavieng by 13th Air Force B-24 Liberator bombers. Naka suffered a near-miss, and arrived at Rabaul on 5 November 1943, the same day as the Carrier Raid on Rabaul. Naka was slightly damaged by near-misses from dive bombers from the aircraft carriers USS Saratoga and Princeton. On 23 November 1943, Naka departed Ponape with troop reinforcements for Tarawa, but the island fell to the Americans before the reinforcements could be landed. 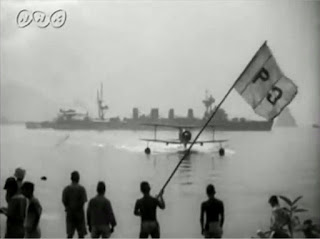 Note the guy waving the flag indicating to the Mitsubishi F1M "Pete" where to dock. Curiously the flag says "P3" perhaps indicating the unit. If that's the case then the "Pete" would belong to the 958Ku which was indeed based in Rabaul during that time and changed its marking to "58-" later the same year.
In the still below the tail marking of the Aichi E13A "Jake" is visible and says "P1-". The only unit we could locate with this marking is the 902Ku. The unit though from October 1943 until August 1944, when it ceased to exist, was based in Truk, Palau, Mariyang island in the Woleai and the Marianas. Therefore we can't pinpoint exactly the location of that part of the video. 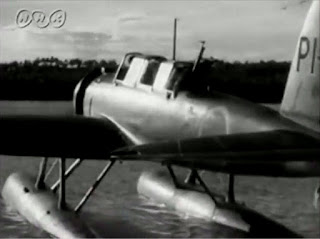 Thank you very much for sharing this. The footage does indeed seem to be taken at Rabaul. The E13a can be seen taking off south past the Vulcan crater at 1:12 and Matupit island can be seen just below Lakunai at 1:29. The footage of the F1M in flight shows the Tavurvur crater in the background too. Great stuff. :)

Now that's what I'm talking about. This is a great find. Thanks!!!
However, I do not think the planes are from those ships. According
to my records the Naka and Sendai only carried 1 Alf each. I will
do some more research. This will be a most welcome challenge.

Only HIJMS Naka of the Jintsu class has a sharp clipper bow, as opposed to the rounded bow of Sendai. If the film was of higher resolution, you could make a definite conclusion. If it is Sendai, it's probably the last surviving pictures of her before she was sunk.