The first post of the year is about gliders; "Chinese" gliders. The short news clip is from the NHK news collection and the photos from the December 1941 issue of the magazine Koku Asahi.
In the beginning of December 1940 the Hankou branch of the Towa Seinen Koku Renmei (East Asia Youth Aviation League) purchased two gliders and presented them at the horse race track of the city. The basically propaganda event was supposed to strengthen the friendship bonds of the youths of Japan and the Reorganized National Government of the Republic of China; hence the two flags in the beginning of the clip. In the article it is mentioned that the Wuhan branch of the League had 100 members, 70 Japanese 30 Chinese and included 10 women and in the clip some women can be discerned. 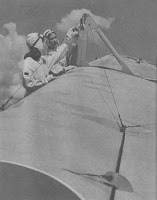 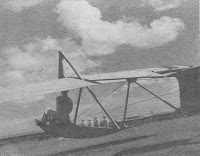 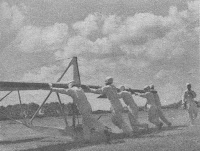 One glider is painted in brighter (gray?) overall colour and the other in darker (blue?). On the tail of the one below it is written "Chang-shicho-go" (Mayor Chang's glider). The Mayor of Wuhan at the time was Chang Jen-li seen in the right photo below putting on his helmet.
The starboard side of the wing of the "gray" glider has hinomaru on the top and lower surfaces but at 00:45 of the video the port side of the wing seems to have the flag of the collaborationist government.
Unfortunately we were unable to pinpoint the type of the gliders but we will keep looking and update this post when we have more info. 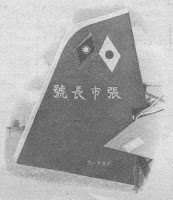 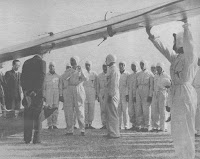 Another great posting. Thanks for sharing.
Just what is the NHK anyway, and how large are the archives.
Floatplanes...!!!

I think this are two Ito Model A2 gliders. The lighter one could be painted light gray, a hint is the white border to the hinomaru on the wing's upper surface. The rudder is red, most probably, if we base our interpretation on the picture showing the markings on it.