Since you like floatplanes so much here's another clip from the NHK collection featuring Kawanishi E7K2 "Alf" & Nakajima E8N "Dave" in action. The video is dated November 20, 1940 and the title is "Umiwashi Tsubasha wo Tsurane Yuyaku Konan Kyushu" (The lined up wings of the sea-eagles surprise attack Jiangnan in high spirits).
The narrator explains:
"Our wild eagles freely attack continental China in all directions with gradually increasing success. The Navy units of Central China achieved amazing results. In early November a part of our seaplane unit force departed from their base flying over the cold autumn waters and attacked the remnants of enemy units in the mountains of Anhui Province.
Performing dive attacks they annihilate the enemy and even surprise attacked enemy positions around Jingdezhen. They also targeted and dive bombed newly built enemy barracks, destroying them completely. After confirming their success all aircraft returned to base without the slightest problem."
The tail marking of the "Daves" is clear close to the end of the clip and is "V-3" for the seaplane closer to the camera. The "V" marking is usually associated with the Tainan Kokutai which was equipped with Zeros, so the unit is elusive for now. If you have any suggestions leave a comment. 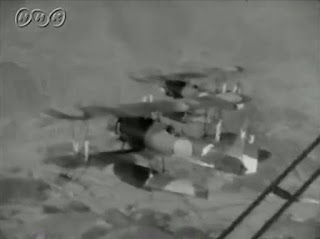 After further research I do believe that the Dave tail code is Y.
If you look close at the single frame photo and use the tail number
3 as a guide, then it lines up with the letter Y.

Hi David,
I'm afraid the tail marking is a "V-". Please take a closer look at the video, not the frame photo.
Thank you for your support.

I have looked at the video over and over and although blurry, I still say the code is Y. If you look at a V-3 vs. a Y-3 you can see how the
letter seems to break in the middle ( Y ) as does the number ( 3 ).
As a V goes straight down, a Y breaks, then goes down. Also the dates
do not match. In 1940 there was a Y. Not a V. The video says 1940.
So with all due respect I will stay with the letter Y. Again, I am
always open to further discussion. Anyone else have any ideas?

Sorry David.
We can agree to disagree but I insist it's a V not a Y.
Have a good one.

Great stuff. The hinomarus well inboard of the floats on the underside of the wings was a surprise. Thanks for sharing!