Okay, I need to explain this first. The contest was scheduled to end on December 15 but because there were no new entries for quite a few days I decided to end it two weeks earlier since there were too much material I had gathered to post. Charlie Swank wanted to contribute to the contest and sent photos of his wonderful model after I had declared the winner. So, that was a “FAIL!” from my part and a lesson not to do that again. Also, I would like to ask you, if you have a model you are about to finish to enter in the contest and the deadline is approaching, please email me. We organised this contest to have fun so deadlines can be extended (but never again shortened) and since personally I'm a big fan of X-planes and What-ifs I plan to have contests of the same subjects again next year. So even if you haven't made it this time or you're working on an idea, you can always enter your model in 2017. Also, feel free to send photos of your work-in-progress, start a discussion and ask questions.
And so, without further ado, here's Charlie's model... 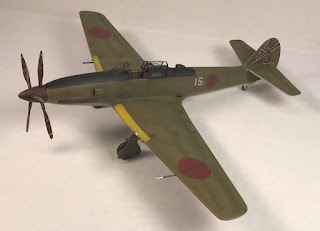 Considered highly unorthodox due its in tandem liquid cooled engines and contra-rotating propellers, the Kawasaki Ki-64 “Rob” was designed to meet a specification for a highspeed fighter that would have a maximum speed of 435mph at 16,405ft and climb to 16,405 in 5 min. The aircraft utilized a steam vapor cooling system in which wing and flaps provided the cooling surface area for the engines.
Raccoon Resin kits are rare, but offer the opportunity to build unique aircraft in 1/48 scale. The fuselage interior halves were thinned out and cockpit parts from a 1/48 Hasegawa Ki-61 were modified to fit. Landing gear doors were scratch built from sheet plastic and new clear parts were vac formed over a resin master provided in the kit. All of the markings were painted using stencils made on a plotter cutter. If you are interested in stencils for painting your own markings, please contact Mike or Charlie at modelstencils@gmail.com.
What if the 39th Rensei Hikotai, Yokoshiba, Japan flew the Ki-64 in the fall of 1946? The model depicts what I feel allied pilots may have encountered if the war continued and this unique aircraft had its chance to prove itself in combat. 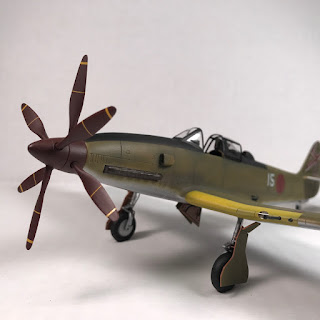 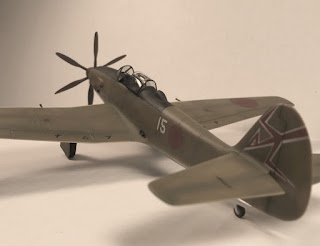 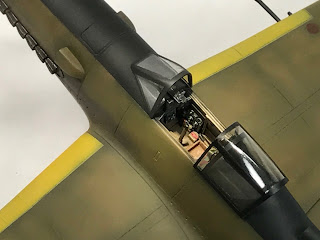 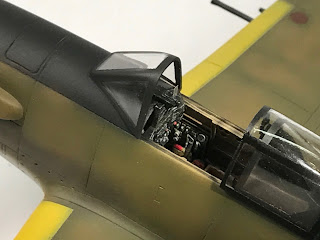 Thank you very much Charlie for the photos of your exquisite model and please accept my apologies for the mess.
Posted by Arawasi

What a beautiful plane !!!

I agree with Eric, a very cool plane! It just says "fast" sitting there!

Excellent. Reminds me that I have a 1:72 MPM kit (IP, though) of this bird in the stash, also to be finished as a whif/service aircraft.