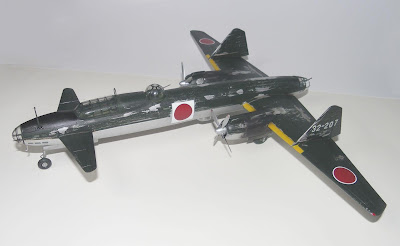 What if Mitsubishi had experimented with a canard version of the G4M "Betty"?
In Japan canard designs were known as "ente type" from the German, therefore this Betty version could be designated G4M2-E and nicknamed "Kamo" (duck in Japanese). The design could offer many advantages like plenty of space for the crew in the completely empty fuselage, from the wing main bar all the way to the nose, larger bomb bay and therefore increased bomb load, excellent arc of fire for the dorsal gunner and since it had a nose wheel lifting the tail, a ventral gunner position could also be installed deleting at the same time the two side-gunner positions. 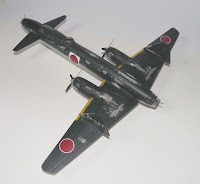 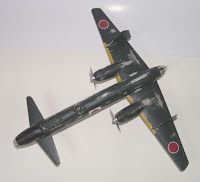 For my "Duck" I used the old Hasegawa G4M1 kit. It took me quite some time to locate spare parts from the new Hasegawa G4M2; the guns and the engines, cowlings and props are from the new kit. I could not find any spare G4M2 dorsal turret and although I was very tempted to use one from a "Renzan" kit, I opted for a turret from an LS "Hiryu", another Mitsubishi design. The ventral turret is from an LS "Nell", yet another Mitsubishi design.
The biggest modification was the elongation of the fuselage in two places. With a normal length fuselage and by just relocating the wings, the whole design looked too short and weird plus it offered zero advantages over the conventional G4M1/2 design. I used two large chunks of balsa behind the dorsal turret and in front of the canopy in order to incorporate the nose wheel. 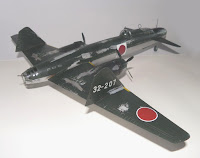 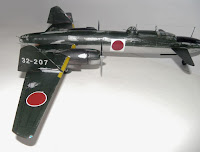 The overall paint job and the weathering to a large degree as well as the markings and the hinomaru for my "Duck" were from a real G4M1 belonging to the 732 Kokutai.
Just when I called my model finished, I discovered the following illustration from here: 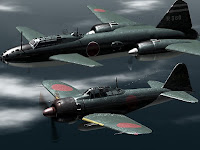 My main objection would be the two gunners on the fuselage sides from where they would be shooting the engines of their own aircraft.
Posted by Arawasi


This is amazing!
A most convincing concept.
The best "what if" so far I've seen.
Best wishes to you George and the Arawasi team for the year to come

Great work - I'd love to see WiP pics of this one. The weathering suits the Duck well, too - I am just not 100% certain about the main wing position and the overall CG of the aircraft? Anyway, an adorable piece of work, thumbs up! :D

Oh yes, I like this! Major configuration changes are a lot of work, and this looks really cool!

One of the best examples of "plastic surgery" I have ever seen. Well Done!

Sorry to be the one to say it, but that model doesn't make a lot of sense. It would be more plausible if you have flipped the wings around and made it into a pusher-type. That way the weight of the engines behind the wings MIGHT counterbalance the weight of the fuselage ahead of the wing. An aircraft's center of gravity must be on the wing's centerline. Your model MIGHT be able to fly, but only by using the forward aero surfaces as lifting bodies to carry the weight of the forward fuselage, and likely some of the engine's weight. In that case, it's would be more a tandem-wing aircraft than a canard. A canard uses its wings as primary load-bearing surfaces, and the canard is just a control surface to cause up and down pitch moments. A tandem wing is an aircraft in which there are two load-bearing wings, one carrying the front half and one carrying the rear half. Just at a glance yours MUST be a tandem wing...unless it's carrying solid lead inside the tailcone.

Hi William.
Thank you for your comment. Good luck trying to make sense of a fantasy model I made just for fun.
I would like to refer you to the Fw42 of similar configuration, where the plane's centre of gravity is certainly not on the wing's centreline.
https://en.wikipedia.org/wiki/Focke-Wulf_Fw_42