Last month two pairs of stamps were sold on the Japanese ebay. Both sets were printed in Manchukuo and were to be released in September 20, 1945. The proceedings were to be used to "buy" three aircraft but the war ended before they were circulated.
The first pair below depicting pilots of the Manchukuo airforce receiving training instructions in front of a Nakajima Ki-27 "Nate" was sold for $US5,000 (five thousand).
The top inscription says "Manshu Teikoku Yusei" (Postal Services of the Empire of Manchukuo). The marking in the middle is the Imperial Seal of Manchukuo depicting a Noble Orchid (or according to Japanese sources an Eupatorium japonicum)
The bottom inscription says "Ikki demo oku seinen soshi juo ozora" (from one aircraft to many, from young to elderly, everywhere in the sky).
The price of the stamp is 3 Fen (1/100 Yuan the official currency unit of Manchukuo) + 47 Fen donation. 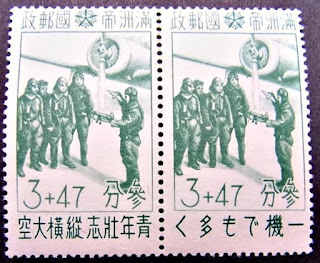 The second pair with mother and children waving flags of Japan and Manchukuo to a formation of Nakajima Ki-43 "Hayabusa" was sold for $US6,000 (six thousand).
The inscription at the bottom says "Kenohiki gekimetsu shukuteki ozora e iko" (donation aircraft fly to the sky and destroy the enemy). 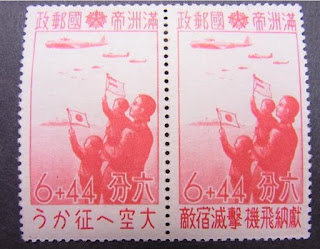 Wow! Those look to be in perfect condition! I'm sure they went for a hefty price.

This is a very interesting way to raise money for the war effort. In the USA there were war bond drives and scrap metal collections and other means of subscription to pay for weapons of war. I don't recall that stamps were ever issued here (USA) but I could be wrong. Was this means of fundraising also used in Japan?

Eventhough they could have been used for postage if they'd been issued, I was wondering if anyone would have actually done that or kept them as a prestige momento since the donation is far more than the price of sending a letter. Are there any other issues that predate these end of war stamps?

From what I could find this was the first time they tried to do that in Manchukuo. I don't know about Japan.

I collected Manchukuo stamps in the 80s & 90s and had a full collection as well as most variations. The aircraft stamps are interesting and I never saw a pair.