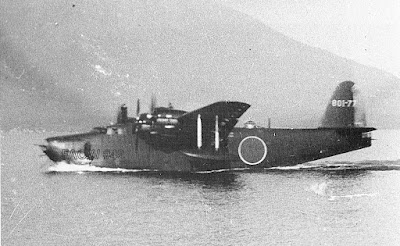 A photo from FAOW# 49, p.50, featuring a Kawanishi H8K Model 12 belonging to the 801Ku in Kagoshima bay in South Kyushu with Sakurajima mountain in the background.
On the same and previous page are two photos of the same flying boat being shot down by a PB4Y. Fire is seen coming out from the two inner engines as the aircraft is trying to alight.


Originally named "Yokohama Kokutai", the unit changed its name to 801Ku on November 1, 1942 patrolling the sea east of Yokohama. Became part of the 25 Koku Sentai and relocated to Rabaul patrolling the surrounding area. On May 18, 1943 became part of the 27 Koku Sentai and relocated to Paramushir joining the campaign against the Aleutians. At that time the unit was equipped with 16 flying boats. On February 3, 1944 seven flying boats relocated to Truk and for five days rescued aviation personnel from the Marshal islands. On February 12 two 801Ku flying boats together with one from the 802Ku raided Roi in Kwajalein atoll. On July 10 the 27th Koku Sentai became part of the 3rd Air Fleet and the 801Ku relocated to Yokohama patrolling the eastern sea towards Ogasawara islands. At that time the unit was reinforced with 24 recconnaisance seaplanes.
On January 1st the unit became part of the Maritime Escort General Headquarters and it was reinforced again with eight reconnaissance seaplanes and 48 field attackers. On February 11 became part of the newly reorganized 5th Air Fleet. At that time all the flying boats were assigned to the Takuma Kokutai.
The 801Ku was equipped with Kawanishi H6K "Mavis" from the beginning until August 1942 and with Kawanishi H8K "Emily" which became the unit's main flying boat after the October 1942 reorganization. The unit also had an attachment of Nakajima A6M2-N "Rufe" seaplane fighters as escorts in April 1942 in Rabaul but from January 1945 it was mainly equipped with Mitsubishi G4M "Betty" and Nakajima C6N "Saiun" (Myrt).
In August 1943 the unit used "U3-" for its tail marking but changed to "801-" from 1944.
As in the previous posting below is artwork created by our good friend Devlin Chouinard. 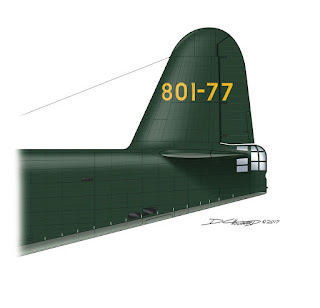 Question, please. Did the Rufes' belong to the 801Ku.
If so, would the tail code be the same. Or, were they
on loan from another unit. Then what tail code? Any way
to find out how many Rufes' used.

Yes, David. We all know your obsession with seaplanes but this is a post about "Emily" flying boats. There will be a time for "Rufe" series of postings. Until then, please be patient.

Thanks for the post! I'd love to learn more about the H8K in the Aleutians.