While waiting for the brand new Hasegawa “Emily” kit we start this series of postings on the Kawanishi H8K “Emily” or Type 2 Flying Boat.
There are not that many photos showing tail markings but first up is one from Vol.3 of “Japanese Military Aircraft Illustrated” by Bunrindo. 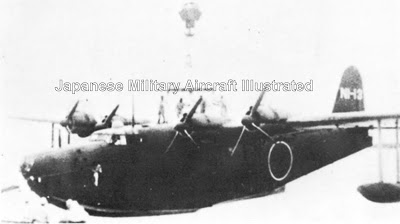 According to the caption this is a “Type 2 Model 11 flying boat (H8K1) being hoisted by a crane. The aircraft in this picture is No. 13 Type 2 flying-boat of the No. 802 Naval Flight Corps (ex-No. 14 N.F.C.) which was put into operations in the central Pacific and the south-east operation area. The No. 801 [?] Naval Flight Corps used the identifying marking “N-1” from Hanuary [sic] to August 1943.”
On November 1, 1942 the second 14Ku was renamed 802Ku and had Kawanishi H6K “Mavis” flying boats sent to Jaluit Atoll in the Marshal Islands and Nakajima A6M2-N seaplane fighters based in Shortland Island in the Solomons.
Apart from Jaluit, the flying boats operated from Makin Island and performed patrol and reconnaissance as well as night bombing missions against  the airfield, military facilities and anchored ships of Espiritu Santo and Kanton Island.
The first “Emily” started to arrive in January 1943 and by the summer of the same year they were the mainstay of the unit.
The seaplane fighter unit based in Shortland cooperated with seaplanes from the seaplane tender Kamikawa Maru and engaged in patrol and interception missions.
From March 18, 1943 the seaplane fighters joined the flying boats in Jaluit and continued with patrol and anti-submarine missions.
On September 21, 1943 the seaplane fighter unit with seven A6M2-Ns as well as the pilots and maintenance crew members were permanently attached to the 902Ku.
On January 29, 1944 the 802Ku relocated to Saipan and some flying boats to Truk from where they transported personnel and supplied the garrison in Maloelap atoll.
The unit was disbanded on April 1, 1944.
On November 1, 1942 the 802Ku was equipped with 16 flying boats and 12 seaplanes. A year later it had only 16 flying boats.

According to FAOW#49 which features the same photo, “Emily” number 13 of the 802Ku experienced fire in the engine(s) when taking off from Shortland in March 1943 and was carried to Rabaul on board the seaplane tender Akitsushima. On March 12, 1943 Akitsushima arrived in Jaluit atoll and left on June 6 carrying damaged flying boat(s?) and personnel, then made a stop to Shortland on June 10 and Rabaul on June 11 before arriving to Yokosuka on June 25.
The Wikipedia entry for Akitsushima has this photo of “N1-13”; obviously the above photo is a close-up of the one below. The Wikipedia photo caption mentions that it was taken in 1942 but obviously this is not correct since the 802Ku started receiving their first “Emily” from 1943. 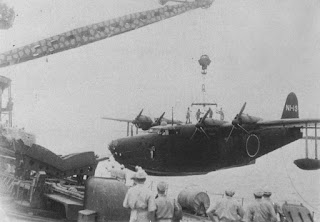 Right after changing from 14Ku, the 802Ku used for its tail marking the letter “W-”. From January 1943 the marking changed to “N1-” and from September 1943 changed again to “Y4-”. Below is artwork created by our good friend Devlin Chouinard of the tail of this rather interesting “Emily”. 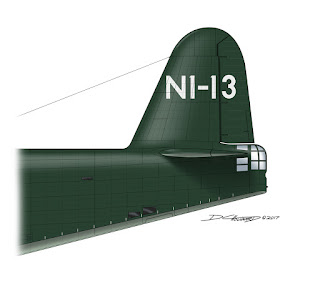 Very good information. I do like the Floatplanes & Flying boats.
Thank you. I hope to see more during the year.

Thanks for the post! I look forward to the rest of the series!

H8K was the best flying boat of WWII of either the allies or the axis.

...looking forward to this new kit - it looks spectacular !