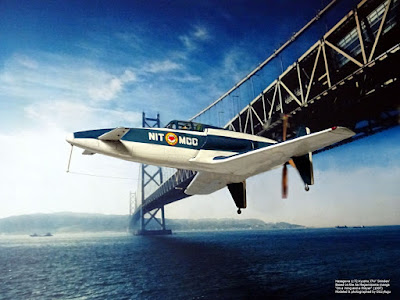 Hasegawa 1:72 Kyushu J7W "Shinden"
2nd, resurrected (fictional) prototype,
based on the Aa megamisama!/Oh, my goddess! manga
"On a Wing and a Prayer", 1997
An old kit I hold pretty dear: because it was an accidental find (and never expected that such official merchandise existed at all!) and because I like (if not love) the manga where it comes from and in which the J7W has a brief appearance in one of the series' early stories.
I found this Hasegawa kit in a (long gone) specialized model kit shop for Japanese animation in Berlin, in a VERY dark shop corner - or did it find me?

The "paradigm" for this machine, which is supposed to be the (fictional) second Shinden prototype which had been buried before the American invasion and lost, stems from a special edition of Kosuke Fujishima's famous and very popular "Oh, my goddess" manga, a one-shot story during the first or second series of books called "On a Wing and a Prayer", published around 1997. In a nutshell, the machine "calls" from its hiding place, wanting to fly again (things bearing a spirit and animated nature are not uncommon in Japan), and finally it is re-assembled again by a group of tech academy students (the machine actually bears their club's colors) with some, err, divine help, and soars again through the sky.

The kit itself is the standard 1:72 Hasegawa scale model of the real WWII Shinden prototype, but the kit came with new water sliding decals and painting instructions for the manga aircraft.
The model was mostly built "out of the box", just some small details were added. 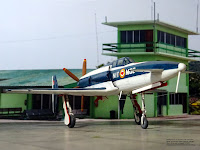 Actually, I was a bit surprised by the kit's colors. I knew the aircraft from the manga, but it's only B/W. In the manga, a "green fuselage" is mentioned, so I expected standard IJN colors with some white trim - but this turned out to be a kind of translation error which is actually none: later I found out that "green" and "blue" use the same word in Japanese, so the confusion was induced by the outsider's point of view. ;)
The color is still debatable, though (see below). Hasegawa recommends white and a dark petrol blue, which is a non-standard color and has to be mixed. Other weird color details include the brown propeller (O.K., it's IJN primer, but looks pretty weird in the overall combo!), the chromate green cockpit and the bright red landing gear insides... but since there are no other color references available (the manga is B/W) I stuck with Hasegawa's official instructions.

The tricky job was the painting process, though, with lots of white (*shudder*) and the very complicated blue contrast areas with hard and straight demarcation lines, which are especially hard to paint on the round fuselage, because of the air intake bulges. Everything was done with brushes and free-hand, I did not get it as good as I wanted to...
Another tricky part were the decals which are provided for some of the blue areas. While the idea of having some of the delicate shapes as a water decal at hand is nice, placing them without wrinkles and matching the blue color of the decals for the rest of the aircraft (e. g. the wings and some parts of the fuselage) was another daring task - you will certainly recognize some areas with color differences ;)
Anyway, overall it's a very good kit, and very decorative. But due to the delicate color scheme it's certainly nothing for beginners or those faint at heart!

As a side note: In the meantime (well, many years have passed since I built this one, must have been before 2002!), there's an 1:32 OOB offering of this specific bird from literature available, from Zoukei Moura. The manga still seems to have some die-hard fans, and the storyline was actually finished only a couple months ago, after roundabout 20 years! Interesting to see that Zoukei Moura chose a much brighter, less greenish blue for their model, and it differs in some other details from the much older Hasegawa kit, too, e. g. featuring a white canopy framing.

Well done, and I also like the selection of backgrounds.