Hello dear nippo-maniacs!
For this new competition, I present you two classic hydro from Hasegawa in 1/72 scale:
the Aichi E-13 "Jake" and the Nakajima A6M2-N "SuiSen” (Rufe). 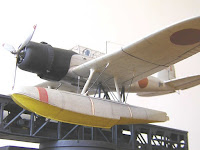 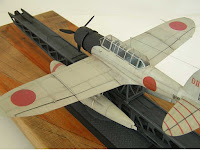 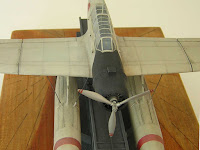 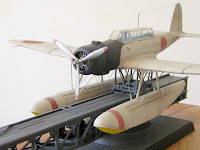 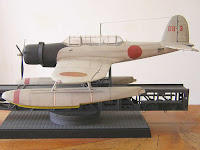 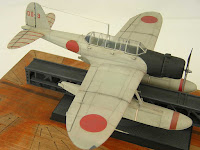 The first one was built with lighter modifications.
I just added and improved some details, such as mooring hooks, pitot tube, crew steps, but above all the propeller hub, which in this first version had no spinner.
The canopy, too thick and not exactly accurate, was replaced by a vacuform of the Clear-Vax Canopies Falcon line, N.18 Imperial Japanese Naval Air Force WW2 Part 1.
The decals are among those proposed by the kit. They represent an E-13A1 of the heavy cruiser "Atago", in the Philippines in early 1942.
The model was set up by placing it on a catapult, always Hasegawa, detailed with some small missing parts, visible on the box-art.
Unfortunately, the model dates back to the mid-1990s when, according the sources, the aotake was correct for the crew cockpit.. 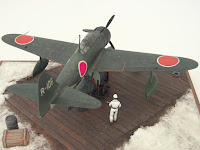 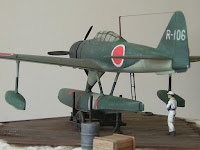 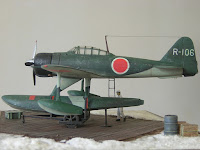 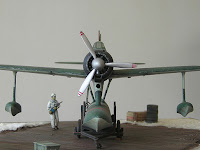 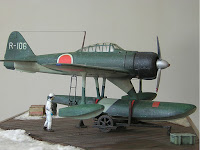 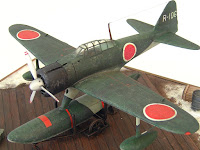 Even the Rufe is practically OOB, with small self-built details.
I wanted to represent something different, and here's the idea of ​​a plane between Aleutians Islands's snow.
With Internet it is easier to find information, but there is again a little mistake.
I finished this kit in the early 2000's. Now the latest chromatic research seems to confirm that the flat part behind the pilot should be black, while here I used the green Nakajima of the cokpit.
The tail codes of the aircraft, out from original decal sheet, refers to a specimen of the 5th Kokutai, in Kiska, October 1942.
The figure was obtained by joining the head of a Japanese ESCI soldier to the body of a mechanical R.A.F. Airfix. The present accessories are both self-built (pilot ladder and wooden case), which come from Hasegawa and ESCI (cans and metal box).
A great source of documentation to complete this model was the "Pacific Wrecks"site.
Best regards from Italy
Fabio Balzano
Posted by Arawasi

Nice work!But I didn't know the bottom of the Jake's floats were yellow. Can anyone tell me more about this?

I like both of them! I feel that the cowling shape on Hasegawa's E13A is slightly off, too rounded at the front. This has nothing to do with your efforts though, simply an opinion of the kit.
The only thing I might find questionable on the E13A is the yellow undersides on the floats.
Overall, very well done!

Excellent efforts by signore Balzano. I too wonder about the yellow float undersides of the E13A, but the rest of the aircraft looks like the color plates I have seen for this color scheme.
The A6M2-N is particularly nice. What I especially like is the weathering. Instead of chipping everything to death, the paint is simply faded. I am also not a fan of figures in model displays, to me they do not look realistic enough, but this figure looks very good. Finally the simple wooden base, oil drum and chest make for a simple but very effective display. I find it hard to believe that it is only 1/72 scale. Buon lavoro!

Excellent models indeed! They could hardly be improved. My comment on the E13A would repeat Monsieur Chouinard's note that the cowling appears a bit too long and I miss some panel lines. Are the float rigging and the drift lines on the tail just an idea too think for 1/72? But I'm pea-counting now!

The A6M2-N is a gem. I also like the diarama displays, particularly the catapult, and figures in general.

I'm really amazed and happy about the welcome to my models.
Thank you very much for everyone!
For the question of yellow under Jake floats, I just followed the kit's painting suggestions.
I also found it strange, but at the same time useful to break the monotony of the all-gray finish.
True or fake that is - perhaps a specific detail of Atago aircraft at that time - I wanted to trust of Hasegawa.

@ D. Chouinard:
It's True, the shape and diameter of the cowling are the less right part of the old Hase mold - Mania origin, if I'm not mistaken - but what do you want ... I'm a lazy modeler!

@ Wind Swords:
I am convinced that planes like Rufe and even the various Zeke up to Mod.52 included, were painted with great care.
That's why I decided to vanish more than scrape.
Too many model makers have an idea of the appearance of Japanese planes looking at scrap photos and this is not always good.
In my way of thinking about modeling, the basis on which the model is no less important than the model itself. It helps to return the pathos of the real subject and surrounds him historically ... but above all I really like to do it!
Ciao and thank you for the "Signore".

Yes, I'm sort of a lazy modeler too! Sometimes I go the other way and make far too much work for myself and then think, "Why did I do that?"

I hope to see more of your work!

Two nice models. Well done on the painting,especially the fading on the "Rufe" something Im still trying to master.

Brilliant, Fabio. The figure is also great. 4.9 for both

Both planes very well executed, in building and painting them,regarding the scale of the plane.
Nice finish of the green color on the rufe.
E13A - 4,8
A6M2N - 4,9