Visited yesterday the Kawaguchiko Motor & Zero Fighter Museum which is open to the public every August. We heard that Harada-san had almost finished restoring a "Hayabusa" so we wouldn't miss this chance to see this beauty from up close.
Harada-san first saw the cockpit and parts of the main wing at a British museum more than 20 years and after lengthy negotiations he managed to purchase the parts in 2013. Since there are no surviving blueprints of the type he worked with three engineers and many war-time photos to recreate as accurate as possible designs based on which the missing parts were fabricated. The restoration of the cockpit and the main wing was completed last summer with the rest of the aircraft last month. The result as you will agree is absolutely stunning!!!
We hope to see the aircraft finished in some cool camouflage scheme and markings. 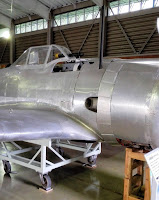 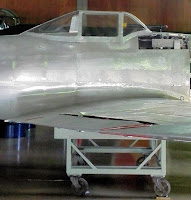 Beautiful work! Looks like an interesting museum, all sorts of treasures there.

Must have been a very nice trip, thanks for sharing! Be assured, I'm jealous. :)
The Betty would attract me the most though - hopefully I will be able to go there one time. Most likely the Hayabusa will be long painted then.

Thanks for sharing George, i really like to see this collection one day.
I read on their website that some of the Zeros there, were taken from an island in the south west Pacific. Was there any information in the museum which island that was ??