Three photo today from a vintage, December 1944, magazine featuring a Nakajima Ki-43 "Hayabusa" standing next to a Nakajima Ki-44 "Shoki" and a Mitsubishi Ki-46. The "Hayabusa" has the engine mount area panels removed offering a rare view of this area but note also the propeller and the spinner area. All the aircraft most unusually belong to the Utsunomiya Army School even though their markings are not visible in the photos.
Small quiz: what model is the "Hayabusa" in the photo? 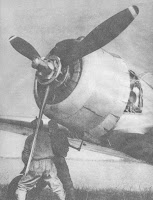 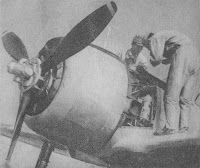 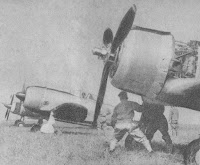 Thank you all for your answers to the small quiz. Here's an illustration by master artist Watanabe Rikyu, (from No. 235, August 1976 issue of the defunct magazine Koku Janaru - Aviation Journal) illustrating the "Hayabusa" variants. In FAOW #65 there are more sub-types like "early production Model 2 Ko early" and "late production Model 2 Ko early" but I believe the illustration below is a handy, quick, basic recognition guide.

Top left: Model 1, top right: Model 2 Ko early
Middle left: Model 2 Ko later model, middle right: Model 2 Otsu
Bottom right: Model 2 Kai, bottom left: Model 3
So, I would say the "Hayabusa" in the photos is a "Model 2 Ko early".
Answering the question by David S about the correct pronunciation and writing of the word "Ko".
The correct Japanese pronunciation is very similar to this:
https://www.youtube.com/watch?v=fBExLwvBNzs
with no L in the end. Speakers of most European languages (Greek, Spanish, French, Italian, German...) and generally those with a knowledge of Latin have no problem to identify the sound although it should be a little longer than a simple "KO".
For the issues regarding the transliteration of Japanese words in the Latin alphabet, check here:
https://en.wikipedia.org/wiki/Romanization_of_Japanese
Simply put, there is no "correct" way to write the kanji 甲 in Latin. "Ko", "Kou", "Koh" or "Kō" are all possible and "correct". As you have probably noticed this blog prefers the first way with the exception of "Ohka".
Posted by Arawasi

I couldn't keep up with the recent vintage picture posts, so in summary: I really enjoy these postings! There is now and then a nice picture in an old book, never reprinted since. Even censored ones can give a nice impression.
But I don't have access to the kind of (Japanese) (historical) literature you have. So thankfully you keep posting those.
Much appreciated!

KI 431, has the oil cooler ring in front of the engine.

The Ki-43 looks to be an early type II based on the radiator and three bladed prop.

Great pics! Most are guessing the Ki-43-IIa (or Koh) because of the 3 blade propeller and because of the open exhaust port (the IIb had the port opening facing the rear).
However, according to Aero Detail 29 and FAOW 65 the Ki-43-II appeared in late 1942 in an initial version, sort of transition between the previous Ki-43-I and the definitive model II. Distinctive features of this very early model were retaining the model I wing as well as of circular oil cooler behind the propeller. Another giveaway is the the smaller air scoop under the nose than what appeared later.
So the correct answer is a Ki-43-II early initial type - still an "a" or Koh in my opinion because I don't think the Japanese had an official designation for this (but if I am wrong, I know the experts here will correct me).

Addendum: Kagero publications calls this a "per-production series" in their books.