Nine of us, Paul Bebbington, Bill Anderson, Andy Binks, Richard Brooker, Peter Fox, Frank Hayes, Jon Stillwell, Glenn Wilson and I, displayed our models on Sunday 8, in front of the sole remaining Kawasaki Ki-100 at the annual Shropshire Scale Modellers and IPMS Telford model show at the Royal Air Force Museum Cosford. Half of the display was a tribute to their Mitsubishi Ki-46 III, "Dinah", with all marks and scales of the "Dinah" as well as a display of box art. The museum also has on display the sole surviving WWII Ki-46.  We filled our four tables quite well I think.
Malcolm Barratt and Bob Foster were there too.
It was a grand day out with there being traders offering new and second-hand model kits, tools, supplies and paints. All three hangars of the museum were filled with like-minded scale model enthusiasts and there was a fantastic number of members of the public.
Of particular interest were Andy's 1/48 Sea Stallion and Richard's "Fugaku", the Fujimi offering of the Transoceanic Bomber project in 1/144.  Many children had shown interest in Richard's egg planes.
- Gary Wenko - 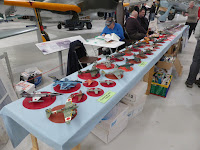